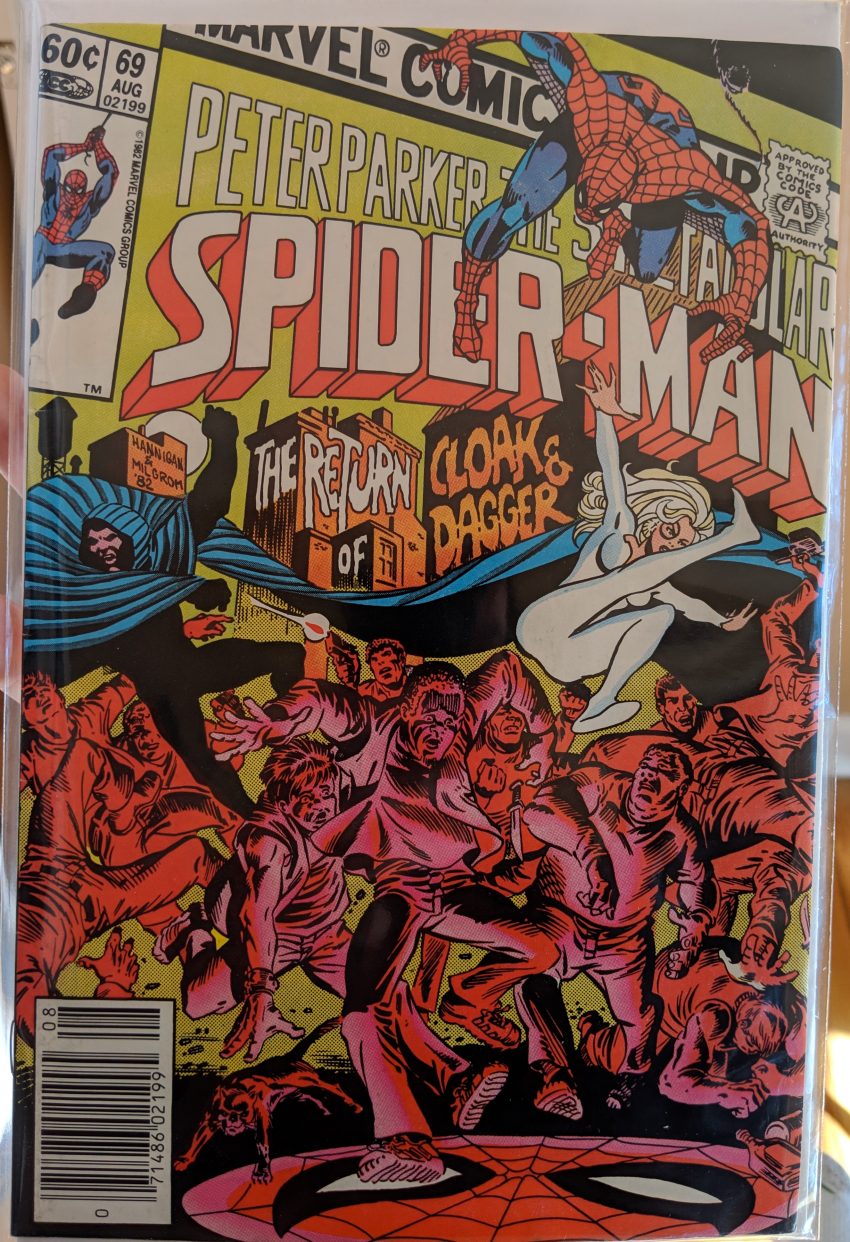 As we’ve seen, Cloak & Dagger were created in the pages of Spectacular just 5 issues ago, and it seems they must’ve been a hit, at least internally, because they’re back already. It’s the current regular team for TAC of writer Bill Mantlo, penciler Ed Hannigan, inker Al Milgrom and colorist Glynis Wein. And it opens… weird.

Kinda feels like a horror comic. The overdramatic language of the splash was meant to indicate this school is abandoned, and currently full of gang members tormenting one of their own for ratting them out to someone. Bill Mantlo’s “black people” accent is a heady combination of offensive and confusing. They say “yo’” instead of “you.” How am I supposed to read that? Like “ya,” maybe? It’s a long standing tradition for white comic writers to just make up their own language for anyone who’s not white, but at least Luke Cage’s “Sweet Christmas” doesn’t require me to guess how it’s pronounced. And this is a comic made before 2000, so the gang members have mind boggling “street names,” none more incredible than their seeming leader, “Shallacko.” Holy hell. Anyway, anyway, “Shallacko” is beating up a “bruthah” for telling someone they sell heroin, and then he’s about to stab him when Cloak & Dagger show up and give a crash course in their powers.

This is damn near a minstrel show, honestly, this is horrible. The various goons not named “Shallacko” try to run, but Cloak can teleport, and cuts them off.

Silvermane! Elderly Maggia boss and all around bad person. Not seen since ASM 180, I believe, and that means… well, we’ll see. Meanwhile, in Queens, Spider-Man is breaking into Aunt May’s house. It’s abandoned, lucky for her, since she hopes to move back in. I guess she probably owns it, but she’s been in a nursing home for a very long time. Seems like it woulda been sold or rented by now. He flashes back to his origins, moved by the surroundings, because that’s what he does.

Spidey follows the cop cars wherever they’re going, and is spotted swinging away by Nathan Lubinsky. Wonder what he’s doing here late at night? He thinks he has an idea for how May can get the money to get them back in the house, but we’ll have to find out about that later. The cops have been joined by ambulances, and the whole gang ends up at a warehouse that’s a known mob meeting spot. Everyone inside has been frozen.

When Spider-Man finds out they’re going after Silvermane, he gets pretty mad. He knows all about that guy, and doesn’t want these kids throwing their lives away. His aggressive response triggers a brief hero fight.

I would be remiss if I didn’t also make mention of Dagger’s aggressively sexual costume, especially on a character Spidey keeps calling “just a kid” and even “so innocent.” Wild creepy, but sadly pretty normal for its time. On the Spidey front, Hannigan is doing the most direct Ditko homage anyone’s done… well, ever, to this point. It’s not a 1-to-1 swipe (That’s what Ron Frenz is going to do later), but it certainly evokes the master. People said Keith Pollard’s Spidey was more in the Ditko mode, but it was positively original compared to this. Spidey thinks to himself that Dagger wasn’t able to stun him as bad as she did before, and maybe she was holding back. He got pictures of the whole thing, but chooses to leave Cloak & Dagger out of the press for now. The next day at school, Dr. Sloan is giving him grief for being out all night taking pictures instead of studying, and then the rest of Pete’s coworkers find out he’s quit his teaching assistant gig.

Boy, you almost start to miss Peter just running out on Deb after a couple months of this. She’s not worried about Biff, though, she’s worried about how she’s prrrrretty sure Peter is Spider-Man. It’s too late to talk, though, he’s gone. He’s off to visit Police Captain Jean DeWolff.

Spidey swings over and infiltrates Kingpin’s tower, but Fisk knows he’s there immediately and just lets him in. He also knows why he’s there, because he’s got spies in the police department. He even knows about Cloak & Dagger, and has heard about their origin so he can tell it to us…

In the same way Hannigan’s Spidey evokes Ditko, there’s no mistaking the Kingpin of Frank Miller, currently winding down his legendary run as writer/artist on Daredevil at this time. Spidey takes the address and begrudgingly swings out to a fancy mansion, where Silvermane has his own private medical staff. Last time he appeared, he was badly injured. Actually, “badly injured” is kind of an understatement. He’s coordinating his drug ring from his hospital bed, but before Spidey can do anything, Cloak & Dagger show up.

Only their 2nd appearance and Dagger is already clearly not seeing her life the same as Cloak, saying she enjoys fighting with Spidey and wishes they could be permanent partners, but Cloak won’t let them. The three of them make short work of the various goons in the room, and then Cloak sets out to kill Silvermane. Spidey stops him, and when Dagger tries to do her thing to Silvermane, Spidey jumps in the way, taking the light daggers himself. Then Silvermane triggers a fire trap that would’ve killed Dagger if Spidey hadn’t saved her, and then he says she owes him one and he’s calling it in right now:

This characterization of Cloak as this oppressive quasi-villain and Dagger as a sweet girl being manipulated is yet another extremely uncomfortable aspect of this comic. As a reasonable person, you probably think that’s it for Silvermane. He was a million years old and severely injured, blood is spilling out of his… whatever those tubes are… of course he’s dead. That would make a lot more sense.