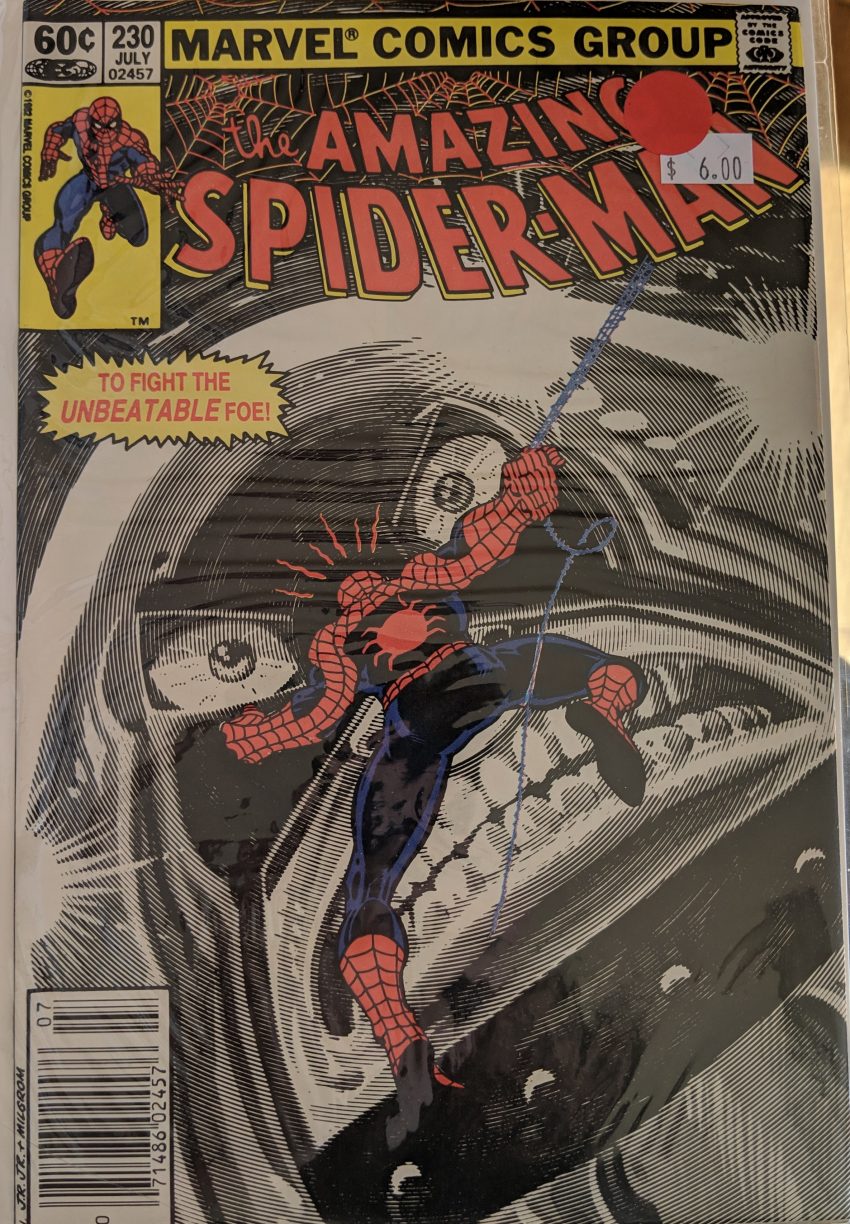 Same creatives, same story. Spider-Man is on the trail of The Juggernaut, slowly leaving the scene of his attack on Madame Web last issue. It doesn’t take long to find him, but what to do with him?

Juggernaut just catches the girder and balls it up. Then he walks over and pulls down half the building Spidey’s standing on for good measure. As Spidey bounces down to the ground, he breaks loose a wrecking ball, winds it up with all he’s got, and throws it, but Juggernaut just bats it away… into what’s left of the condemned building.

It takes Spidey 20 minutes to claw his way out of the rubble. When he does, he hears The Juggernaut just walked away, so he’s off again. Then we turn our attention to The Daily Bugle, where everyone’s working on or paying attention to the Juggernaut situation. Glory Grant & Betty Brant are comparing notes on their jobs when…

Seems safe to assume that’ll go somewhere, hm? Bannon is already hitting on some other poor lady when JJJ bursts out of his office and orders him down to the Hudson River, where The Juggernaut has most recently been spotted, and then we go there. Black Tom is wondering where his partner has gotten off to, when he finally spots him trundling up. But while he doesn’t know it yet, he’s not alone. As he reaches the waterfront, Spider-Man runs out of webfluid! That’s some bad timing. As he drops down out of the sky, he gets harassed by a truck driver & loyal Daily Bugle reader.

Yes, our desperate hero drives a whole truck full of gasoline into his foe.

As he watches the flames, Spidey suddenly remembers he doesn’t kill people and starts to panic, but he needn’t worry, as Juggernaut strolls out of the fire. He himself is on fire, and he walks into a fire hydrant, which bursts, creating a cloud of steam all around him. And now he’s finally mad. Spidey leaps on his head and tries to get his helmet off, but he says he’s welded it onto the suit after too many people have gotten it off of him. Now Juggernaut is planning to walk him into another building, so, now frankly irrational with desperation, Spider-Man just covers Juggernaut’s eye holes and hangs on for dear life.

Spidey leaps away as Juggernaut beings to sink, but he’s really messed up, and doesn’t get very far. However, this seems to be working…

Nothing can stop The Juggernaut, but it turns out enough wet cement can indefinitely delay him. Spider-Man has actually done it. Not only that, but when he went looking for more web fluid on his belt earlier, he accidentally started his automatic camera. Escaping the scene, it turns out he got some useful pictures totally by accident. Back at the Bugle, Lance Bannon is bemoaning the fact that cops wouldn’t let any photographers near the battle just as Peter runs in with his pictures. They’re a little fuzzy (Having been shot through his suit), but they show the explosion and the sinking Juggernaut, so they’re worth printing. But the visibly battered Peter Parker barely hands them off before running right back out and heading to the hospital to see Madame Web.

Meanwhile, Black Tom is still circling the harbor in his boat, eager to see the look on the cops’ faces when Juggernaut explodes out of the cement. But hours pass, and he never does.

There you have it. Spider-Man having to beat literally impossible odds is a favorite trope of writers and readers alike, and I think Stern & Romita, Jr. really raised the bar on that idea with this one. The classic, of course, is the ol’ “Spider-Man trapped under more weight that he can possibly lift” gag from the Ditko/Lee days in ASM 33. Writers continued to put him under lots of weight over the years, but making that immovable object The Juggernaut was a unique & clever choice. Many have tried, but no one’s really topped it since. And the crazy thing to me is, this is rightly considered one of the greatest Spider-Man stories, but it’s also got Roger Stern doing this housekeeping. “That stuff with Betty in the 70s was terrible and creepy, I’m gonna get rid of it real quick.” “This random old lady knowing Spider-Man’s secret identity is weird, I need to do something about this.” You know? He did these retcons while also telling an all-time classic Spider-Man tale. It isn’t the last time he’s going to make some adjustments he thinks are needed while making great Spidey comics, either. And the art! Romita, Jr. is one of the best to ever do it, and a mismatched contest like this really gave him a chance to show his stuff. Such a great story from top to bottom.