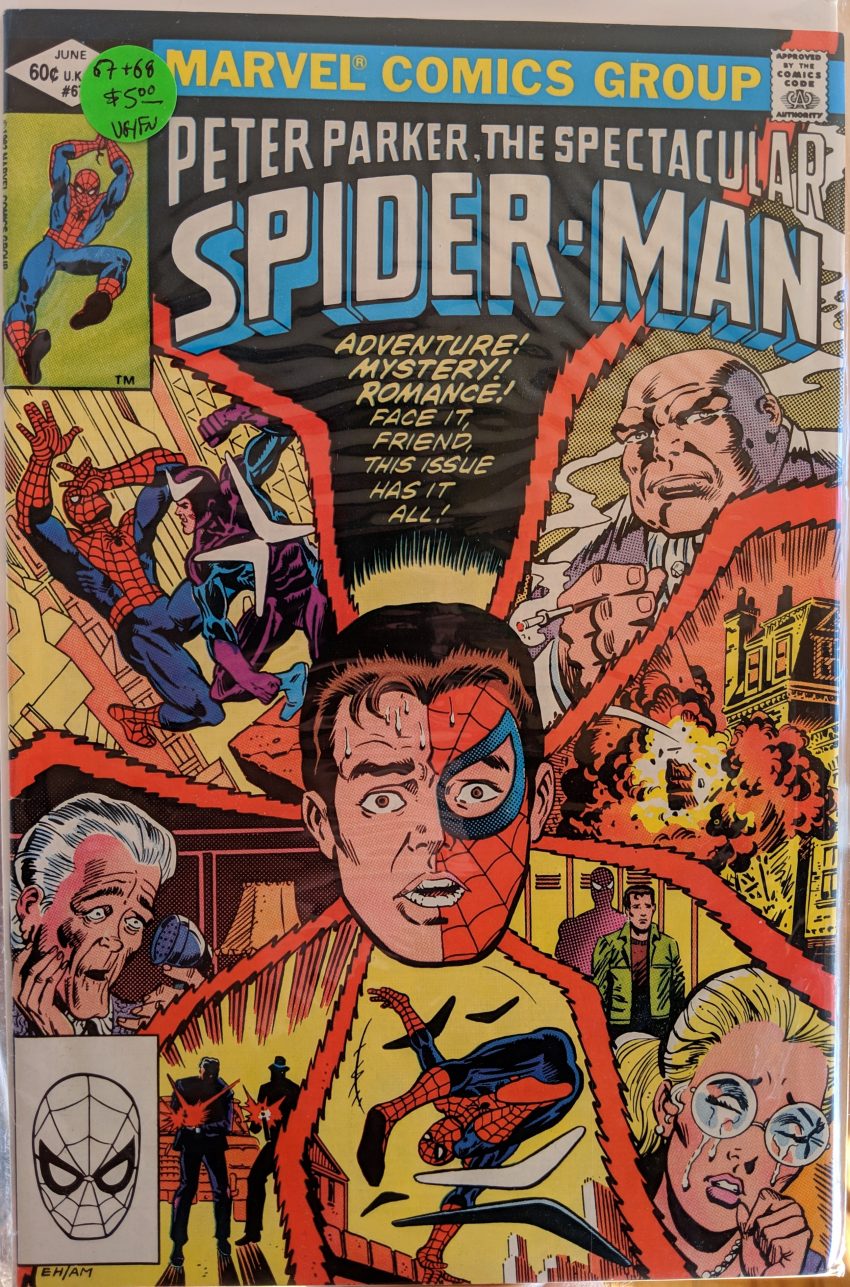 What lurks behind Ed Hannigan’s Frank Miller impression? Seems like a lot! It’s been a minute since I’ve seen a Spectacular. This one’s by writer Bill Mantlo, penciler Ed Hannigan, inker Al Milgrom & ubiquitous colorist Bob Sharen. It begins with an informant who turned state’s evidence being blown up by Boomerang, one of the silliest mercenaries in the Marvel Universe. As the informant’s handlers rush into his building after the explosion, Boomerhang is happy to give him his Official Handbook of The Marvel Universe entry:

Preposterous! Boomerang flies away from the befuddled g-men, and that’s it for that. Yeah, man Boomerang flies. Doesn’t that seem like it would be outside his powerset? Does he come back if you throw him? Hours later, Peter Parker is besieged by phone calls.

The final call is Aunt May, who Peter preemptively yells at before he knows it’s her. She’s calling to make sure he remembered he’s taking her to the cemetery for the anniversary of Uncle Ben’s death tomorrow, and he says he’ll be there. Apparently, he fought Electro last issue, and his costume is ruined, so be spends the day repairing it, and then heads out as Spider-Man. He swings past The Kingpin’s office, segueing into the next scene…

Kingpin lists Boomerang’s many failures in past comics and tells him to get lost, so Boomerang beats up all Kingpin’s guards to prove himself. He even throws one of his silly boomerangs at Kingpin, who catches and crushes it. For some reason, he decides to give Boomerang a chance. If he can kill Spider-Man, there will be more work for him. Boomie flies off to get beat up…

Later, Peter is at school, thinking of giving up his assistant teaching job because he’s living too many lives. Marcy Kane shows up to tell him he’s got a promising career as a photographer, but clearly doesn’t care about this, then Dr. Sloan catches him to pile on some guilt, too. He slinks away feeling down about himself, and then things get weird.

Bad time for Deb Whitman to find him. He makes her feel bad so she’ll run off and not see what he did to the locker, because that’s their relationship, and then spends the rest of the day being run ragged in classes. When his school day is finally over, Spider-Man takes to the sky, and finds his way to The Daily Bugle, where Boomerang is waiting for him, having heard he’s seen there all the time.

“Tweety-Spider?” Really? They do some fightin’, and soon JJJ sees them fighting right outside his window and demands a photographer.

Spidey sees Lance Bannon getting shots of them fighting, and the last thing his wants is that guy making money off this, so he takes the fight back outside and “accidentally” wrecks Bannon’s camera in the process. Throughout this whole incident, Spidey & Boomerang have both been making way too many baseball references due to Boomerang’s past as a pitcher. I don’t think this has ever happened before or since in a Boomerang story, and it gets old fast.

Spidey manages to disarm Boomerang of his many weapons, and he panics and tries to run for it. Meanwhile, Kingpin’s goons are watching from the ground. As Boomerang tries to hide in a dark alley, the goons pull up in a car, about to execute him.

Spidey, of course. He lets Boomerang defend himself, but then just webs him up with the others and calls the cops. As the whole lot gets hauled in, Spidey gets some good photos of it to outdo Lance Bannon, figuring he deserves some kind of win today. Aaaaand we’re out. Neatly tied up. Come back next time for one of the most famous Spider-Man stories ever!