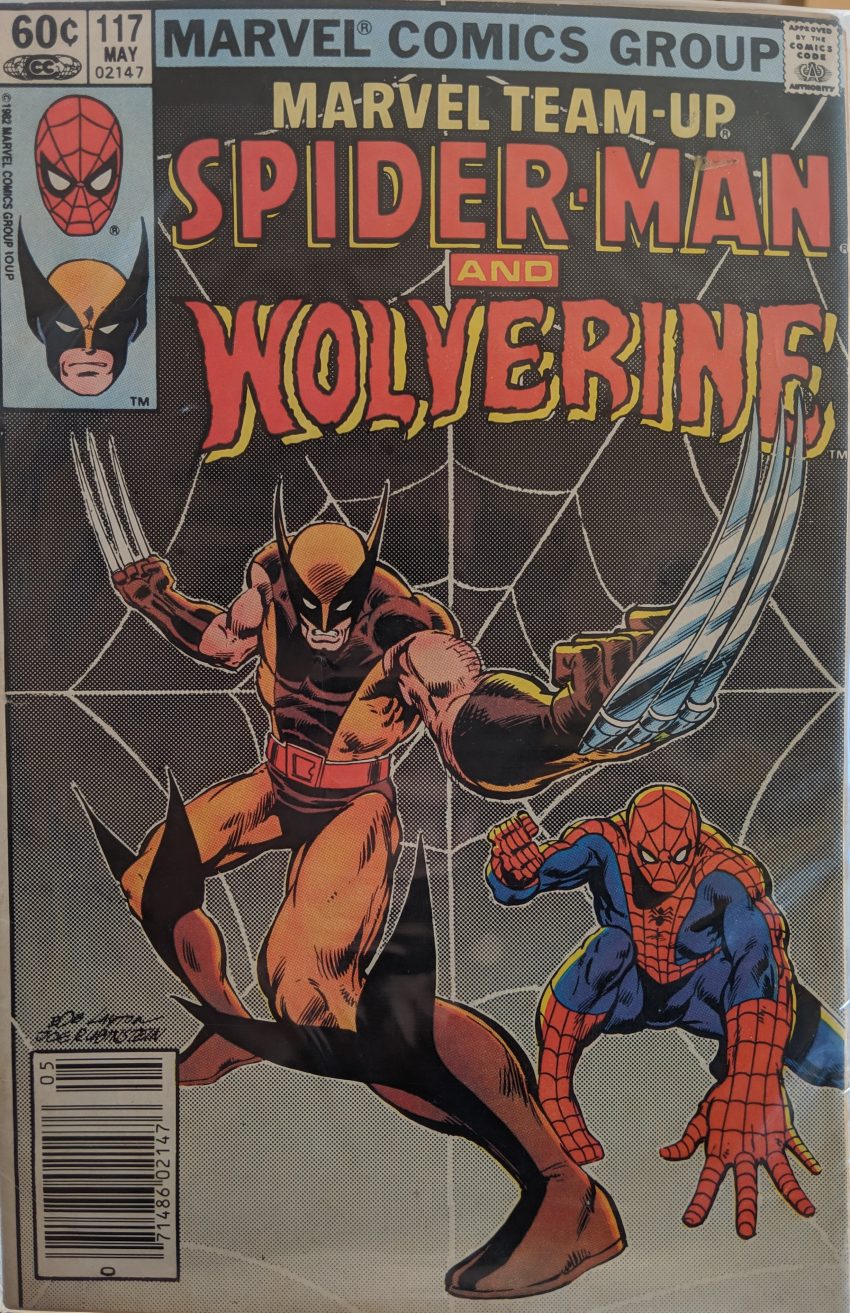 Whatever Bob Layton was going for with this weird cover, I don’t think it worked. I’ve had this one for many years, but honestly, I have no idea where it came from. Legit nothin’. It doesn’t seem like a comic I would’ve bought. I didn’t actively seek out MTU until just recently. But I’ve had it for a long time. Even more baffling, I have a reprint of it in Marvel Tales. I have 2 copies of this and don’t know why. Anyway. The usual suspects bring us a team-up of Marvel’s two most popular characters in this time period (And probably now, also, although it seems like Wolverine’s star has faded in recent years). Shame we didn’t get a better artist. We get rolling with Wolverine hunting a deer. As he creeps up to it, someone somewhere is watching him on a camera, marveling at his skill for stealth. Then there’s this bit. You might have seen it passed around on the internet:

Yeah. Wolverine just taps deer once he catches them. He’s pretty happy about the whole thing as the deer runs off, until a Roman Centurion on horseback brandishing a laser gun accuses him of trespassing. There’s something you don’t see every day. And it gets weirder, because suddenly there is a “no trespassing” sign that wasn’t there moments before.

The panel of him putting his claws out is so odd. Logan dives into what appears to be a Roman Legion with abandon. Within minutes, their leader is terrified to note that he’s already “defeated” (read: chopped up?) 100 soldiers. So they toss gas canisters at him, and that takes him out.

I have no idea who this is. I’ve apparently read this story before, maybe twice. No memory of it. The goons dispatched to the city are for Spider-Man, of course, who is on his way to attend a science lecture with some of his classmates when a bunch of Roman Centurions in flying machines come for him. He sees a crowd gathering below, naturally, so he decides to lead them away so no one gets hurt. Then he does what he does.

They try to deploy the gas, but Spidey dives into an alley and loses them. They give up and fly away, not knowing he planted a tracer on one of them. And I guess his now-ruined plans were also a date with Marcy Kane? For real? A lot can happen when you miss five issues of Spectacular Spider-Man, I guess (We’ll check back in with #67 in a few posts). Meanwhile, Wolverine wakes up in a coliseum filled with mannequin spectators and fake crowd noise played over a loud speaker, as…

The knight turns out to be a robot, easily dispatched. Then Wolvie slashes his way into a door and is shocked by what he sees. We’ll have to wait to see what that is, as his mysterious host is watching Spider-Man swing up now. Ludicrously, through a forest, like it’s no big deal. So, the mystery man does what you do in these situations and… raises his giant castle out of the ground. Really, man?

Really. Spider-Man is run through a gauntlet of your typical traps… spikes and trap doors and such… while Wolverine finds himself in a Roman Bacchanal-type situation. It’s all robots, too, though, and he’s pretty mad.

That’s just weird. Wolvie keeps on slashing up robots as Spider-Man walks in. He initially thinks Spidey is a robot, too, but the ol’ misunderstanding only lasts 3 panels, because we got stuff to do. The master of the place decides to test their “spiritual mettle” with a crisis, and the next room finds them confronted with…

Wolverine responds to this devil’s bargain by leaping up and destroying the robot. But a 2nd one walks in and keeps talking. This is some setup. Spidey wants to know why this is happening, and is told it’s a test. Then Wolverine stops trying to slash everything and offers a plan:

“Who are we? I don’t know!” Well, he’s Spider-Man and you’re Wolverine… Spidey forces Logan’s hand by going to help the prison, so Wolvie’s off to save the town. He jumps up and beheads the 2nd robot just like he did the first, though, just ‘cuz. A quickly made web slingshot gives Spidey the altitude he needs to reach the plane about to gas the prison…

While Wolverine approaches the army headed for the town only for them to all disappear in a flash. On top of that, the town is completely empty, too, the whole thing was fake. As the heroes make their way back to the castle, it’s not there anymore. Wolverine goes nuts and slashes away at the ground until he reveals a tunnel.

The scale of this is out-of-control-ridiculous. I guess we’ll get some answers next issue.