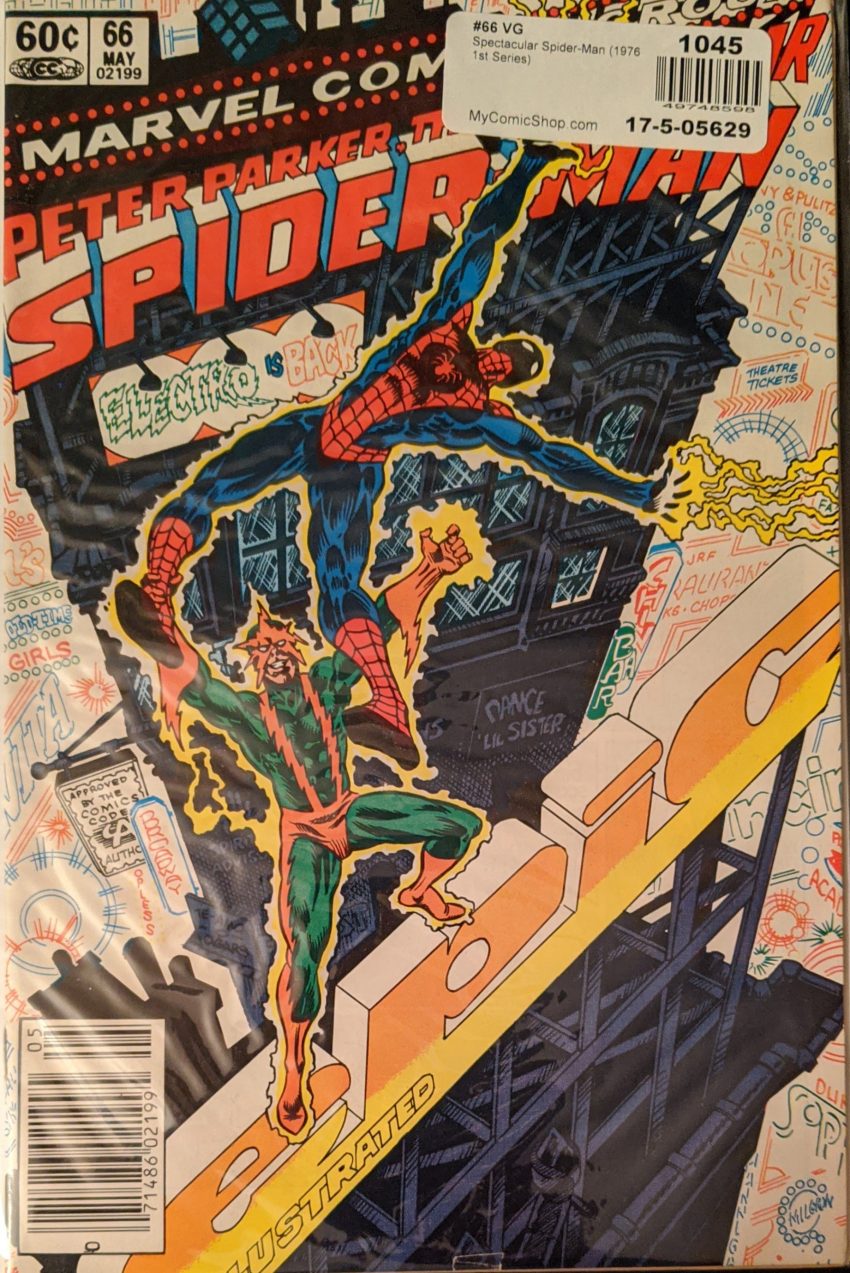 Crazy cover by Hannigan & Milgrom. The abstract expression of Manhattan below just using text is really cool. Big, random shoutout to Epic Illustrated, Marvel’s creator owned imprint of the time, too. It’s Mantlo, Hannigan & Mooney inside. I think maybe Electro isn’t considered one of Spidey’s big villains, and I’ll grant you his schemes tend to be petty and he’s not the most 3D character, but power-wise, he’s got to be up there. Super dangerous. A point this comic strives to prove by showing how he’s being held in Ryker’s: wrapped up like a mummy in “non-conductive bandages,” only fed intravenously by plastic robot arms. They are serious.

I really hope Max Dillon is in the E-Section because his supervillain name is Electro. He zaps his way out of prison and rides the electrical currents of the power lines to freedom. He’s apparently been in there since his last appearance in this title, #42, when he was trying to join the Frightful Four. He’s decided that was a mistake, and is going back to working alone. Meanwhile, Peter Parker is late to meet Marcy Kane. Not because of Spider-Man, for once, but because Dr. Sloan was congratulating him on a good exam result, which Peter credits to studying with Marcy. Things seem to be ramping up between them super fast. He finds a place to change out of his Spidey gear and appears behind Marcy.

Did that guy bleep himself?? Poor Deb Whtiman. I have no idea who BIFF RIFKIN is. Sometimes he seems like a meathead, sometimes he seems like a nerd. Deb tends to call him “preppy,” but what does that mean, really? The drawbridge thing is Electro, of course. He’s on a rampage sucking up all the electricity in the city to be “fuel for his vengeance.” He hasn’t mentioned Spider-Man yet, but I assume that’s who he intended to revenge himself uponst. Not sure what else he’d be doing. Speaking of, Peter is arriving at Marcy’s place with her, and inside, he tries a romantic move “to show his gratitude.”

He picked her up and fell down on the couch with her! “As a friend??” You got some weird friend behaviors, buddy!

There’s the Marcy Kane we know. Certainly can’t blame her. JJJ gets more and more agitated until Electro swoops by overhead. He tells Marla to find a phone and call Robbie to let him know JJJ is on the case. He runs off to get the story, and Spider-Man leaps by overhead, just long enough to make JJJ mad, before reaching Electro.

I note the theater is playing the cult animated movie “Heavy Metal” in “Dolby Gillis Sound.” Got to find ways to amuse yourself drawing comics. The manhole cover was just to distract Electro while Spidey runs into a hardware store and puts on some rubber gloves. He belts Electro, but it seems Big E is more powerful than ever, as these villains tend to randomly be, and he shrugs it off before blasting Spider-Man out of the store. He keeps moving as he formulates a plan. The crowd is amazed by his abilities, which sends JJJ into a rage, and he admonishes Bannon for calling Spider-Man a hero. There’s a time & a place, JJJ!

This issue has had some of the most Stan Lee-esque crowd chatter since he left ASM. JJJ gleefully leads Bannon up to get a photo of Spider-Man’s corpse, but they can’t find it. I know you’ll be shocked, but he’s not dead! He’s prrrretty messed up, tho, as he slowly makes his way home to rest. Electro is already considering how to take his revenge on the FF for their part in his most recent prison stay. I mean, all it would take is one good zap to beat Spider-Man, but the whole FF? Come on, Max. Meanwhile, JJJ is calling in his story, and Spider-Man is just getting home with an idea…

Sure is lucky that air mattress was the right colors! JJJ getting humiliated by his own hubris is pretty great, tho. So, down on Broadway, Electro is terrorizing people waiting for Spidey to show up, and when he does, Electro doesn’t notice his fancy new rubber suit, and is shocked when Spider-Man isn’t shocked. They get to fightin’ as JJJ watches on TV, hoping Spider-Man will die so his paper won’t lose credibility. Very classy. Spider-Man is berating Electro, telling him he never comes close to winning their fights and asking why he keeps doing this.

This was a pretty fun one. Fast paced, action packed. Look how much stuff got crammed in one issue. Electro, the Marcy plot, the Deb plot and a pretty big focus on Jonah’s vendetta, all in 24 pages. Pretty impressive.