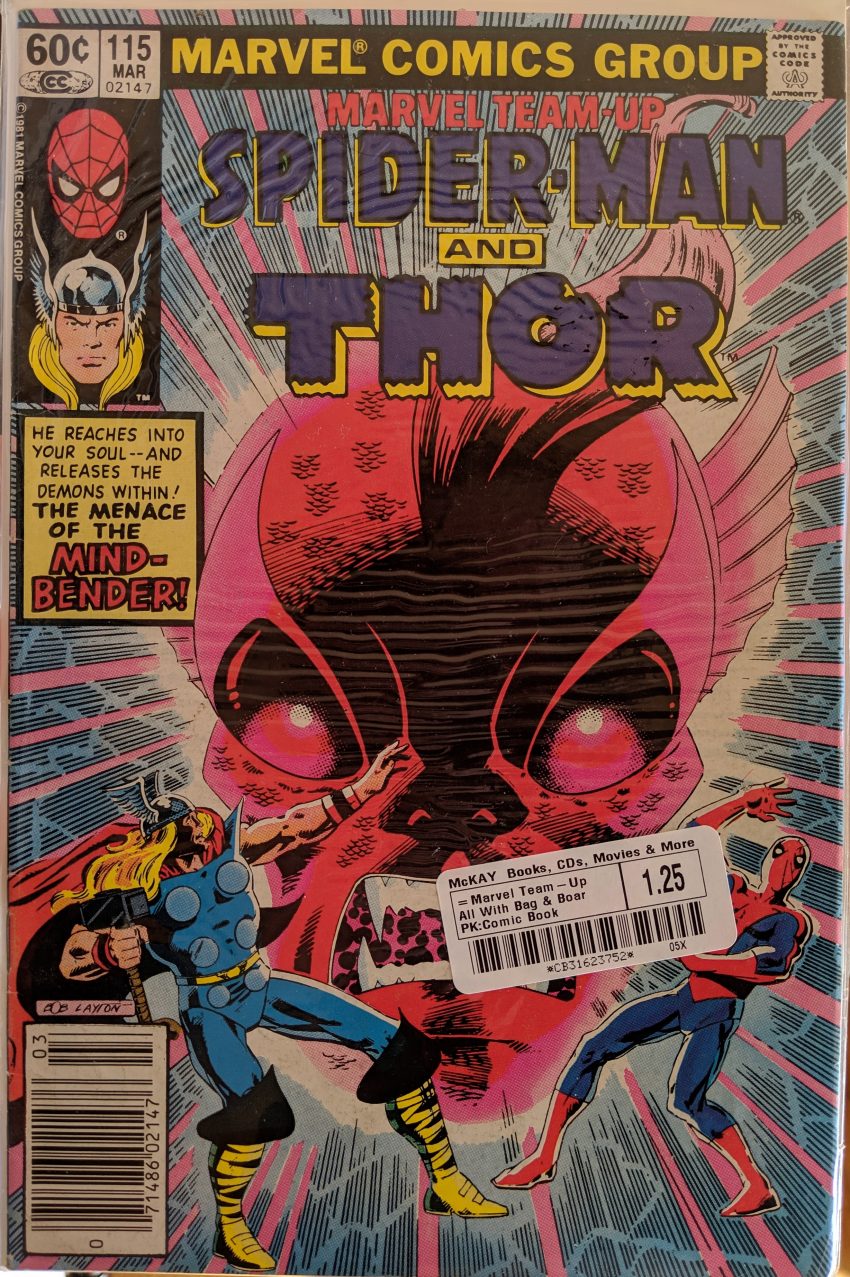 This is one of a few in the collection that comes from a magical place called McKay’s. It’s a giant used everything store. If you need the new Spider-Man game, a PS2 memory card, Twin Peaks: The Return on Blu Ray, a statue of Dr. Strange, Settlers of Catan, a bass guitar, Between The World & Me by Ta-Nehsi Coates, Prince’s Parade album on vinyl, a handful of Legos and Marvel Team-Up #115, there’s a place where you can get them all. Team-Up continues to a be a JM DeMatteis/Herb Trimpe/Mike Esposito/Bob Sharen production. It begins in an operating theater, with press assembled to watch Dr. Don Blake operate on a homeless woman who was injured in a police shootout. Peter Parker is there to photograph the proceedings. Why is the press gathered for this?

I’m still not sure. Dr. Don Blake is (improbably, to me) STILL Thor’s human secret identity in this period. My knowledge of Thor history has a lot of gaps in it, so sometimes I’m just amazed how long this persona hung around. Walt Simonson must be very close to getting rid of him forever (ish) at this point, but I guess not yet. As the operation proceeds, a mysterious, 7-foot tall figure dressed like The Invisible Man appears in the hospital lobby and heads for the elevators. A guard runs up to him…

Well, that’s weird. As he reaches the floor the operation is taking place on, he’s stopped by police this time, and a physical confrontation reveals our villain for the evening:

Haha, wow. That is something. It’s only a moment before Meru the Mind-Bender is plowing into the press box. In the chaos, Peter Parker slips away, and soon The Amazing Spider-Man is on the case. He keeps the big weirdo busy long enough for Dr. Blake to finish the operation, but just barely, as Meru & Spidey come crashing down into the operating room.

Meru’s zap works the same on Spidey as it did on the guard, making him abandon any sense of responsibility and just swing off. But while he’s doing that, Dr. Blake has slipped into a supply closet and tapped his cane on the ground to become The Mighty Thor! As Meru makes a beeline for the unconscious “Jane Doe,” Thor steps in.

Meru decides there’s no reason to mess with Thor and speeds past him to an escape. Thor doesn’t want to throw his hammer for fear of hitting the other people in the room, so Meru gets away. As Peter Parker makes his way back to the confused press, we learn the “mind-bending” has not worn off.

JJJ is ecstatic about Spider-Man’s seeming change of heart. Then the news room is abuzz because Meru is now flying around Times Square on a purple flying machine zapping people with his mind beam. Peter thinks he should do something, but then remembers he’s not in the superhero business anymore. Elsewhere, Dr. Blake is talking with his Jane Doe, who has amnesia and doesn’t know who she is. As they talk, she starts acting weird, and says she can sense Meru nearby, and begs Blake to go stop him. That sure feels strange to him, but he runs off, and soon Thor is once again attacking the creature.

Meru hits Thor with his whammy, and it has the unforeseen effect of putting the Don Blake personality in Thor’s body. Turns out, Don Blake sucks at being Thor, and Meru dispatches him with ease. He’s been able to understand English this whole time, and now starts speaking it, telling the people nearby that if they don’t bring him Jane Doe, he’ll kill Thor and then destroy the entire island of Manhattan! Back at the hospital, Jane Doe’s memories have begun to return, leading to this bizarre couple of panels:

Peter seems to be talking himself out of giving up being Spider-Man, but we switch our scene to Meru on the edge of a building, saying time’s up and throwing the still unconscious Thor over the side. But, you know…

Spidey mixes it up with Meru while pontificating about how humans are more than the sum of the parts of their personality until Meru grabs him by the wrist and throws him off the building. About then, Thor wakes up, Don Blake still in the driver’s seat, but he’s had a similar realization.

Guys, he’s fine. He’s Spider-Man, he just shot a web and saved himself, how could Thor not expect this? Right about then, a crucial piece of the puzzle is revealed:

She explains that their planet had two rival factions, and Meru is from the oppressive group that ruled the planet. But then her faction made the entirely rational decision to blow the planet up in protest while both of them were off-world, leaving them the last of their kind. She became a human vagrant and gave herself amnesia to hide from him, but now that he’s defeated, she feels free. She celebrates by throwing him off the building to his death. Spidey saves Meru while Thor restrains Dalia… but only for a second. Hey, guess what, the two aliens have a romantic history neither of them wanted to mention earlier.

Thor & Spider-Man go their separate ways, no idea what just happened. But as Spider-Man leaves, he doesn’t see the two energy trails left behind by the explosion merge into one and, the narration tells us, begin to scream. To be continued next issue, which will throw The Valkyrie into the mix, as well.