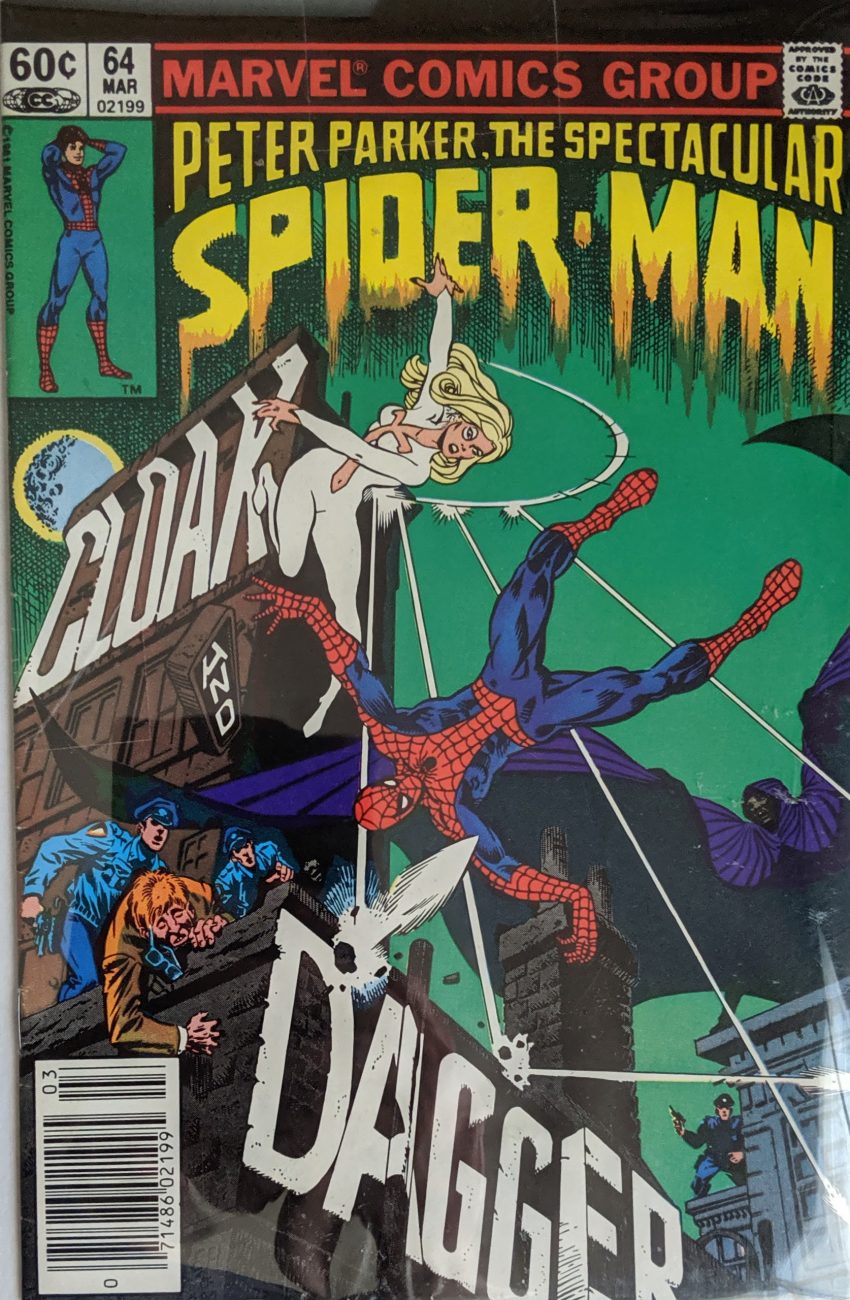 Spidey looks more like he’s just flopping around like a ragdoll there. Our first issue of TAC in a minute is one very recently acquired. It’s the debut of Cloak & Dagger, and as such, can be very pricey. And since I’m not a big fan, it’s something I just decided I wouldn’t get. And then somebody somehow was selling it for a reasonable price on eBay, so here we are! It’s Bill Mantlo, Ed Hannigan, Jim Mooney & Bob Sharen on deck, as Spider-Man swings through the city at night and hears a terrified man on a rooftop begging for help.

Already here on page 3, they’re not wasting any time.

Spider-Man will fall in love with literally any woman in 0.0 seconds. I’m used to thinking of Hannigan’s stuff as having a pretty Frank Miller-y feel, but this is some serious Ditko impersonation. Spidey is furious with the new kids, and they mix it up. Dagger fires some more of her light daggers at him, and they follow him wherever he goes. I don’t think that is maintained as these characters progress, that’s a surprise. Spidey does his best to evade, but then Cloak appears from a shadow and messes up his Spider Sense long enough for him to get zapped. Not enough to kill him, but he’s pretty miserable as they teleport away in Cloak’s, er, cloak. A couple of cops show up, and naturally think Spidey killed that guy, but when they realize who the victim is, they actually think it’s pretty cool. Super nice. Spider-Man escapes by essentially falling off the roof. He barely manages to drag himself home and passes out. The next day, Peter is at The Bugle, looking for info on the dead drug man. He asks a guy simply called Mack what he could find, and is told he didn’t deal in just any drugs.

Well, alright. Spidey crawls into the Ellis Island hospital in a weird sequence where “the ghosts” of old time immigrants bustle around, then hears a scream and heads in that direction. Then he.. Stops to check all his equipment for some reason… and then he’s on it.

As this blog can attest, Bill Mantlo has been behind some extremely goofy Spidey stories. This seems uncharacteristically grim. C&D explain to the goons (As if they didn’t know, so much exposition-as-dialogue here) that they survived and escaped, and as the mob cut their losses and left the island behind, Cloak & Dagger discovered they had gained crazy powers from the experiments. Spidey overhears all this and then bursts in, saying if he’d known what they’d been through, he would’ve been helping them bring these guys to justice.

Aw, look at the crooked trimming job on this page. Dagger has now predictably become a hostage, the goons trying to use her to escape, but then everything goes dark courtesy of Cloak.

Quite an abrupt ending. We didn’t even learn Cloak & Dagger’s real names. They will go on to plenty of adventures, though, and even a TV show eventually, so there’s time for that later, I guess. Kind of an odd issue. Extremely fast-paced and surprisingly dark.