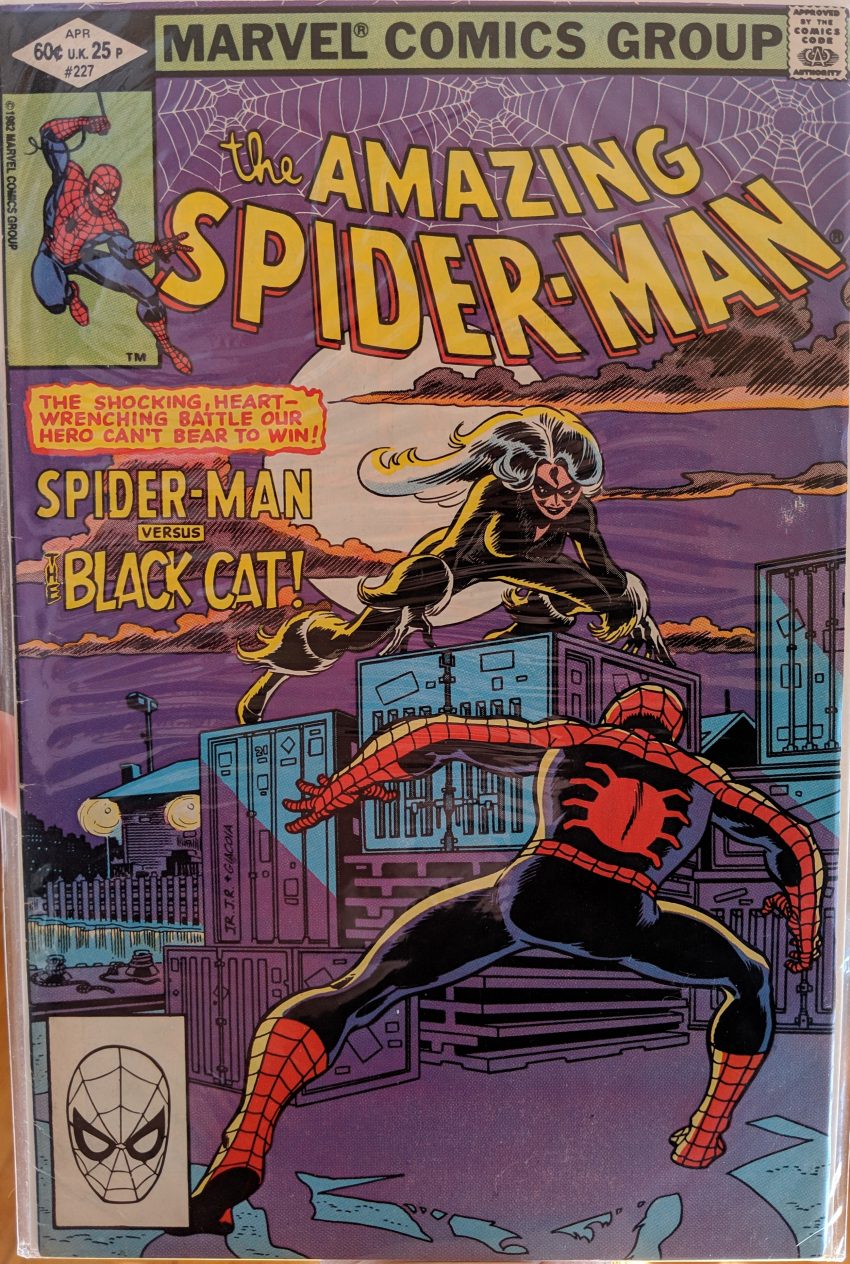 That certainly doesn’t look good for the budding romance that began last issue. This is the first one in awhile where the same creative team from last issue continues unaltered this time, as Spider-Man is barrelling across town, angry about today’s Daily Bugle. He quickly stops a guy robbing a pub on the way to the office of Captain Jean DeWolff, wanting to know if she’s the one who tipped off The Bugle about the row at the costume party the night before. She says she is.

Spidey hops out the window. DeWolff thinks about how, if he knows where Black Cat is, he’s aiding a fugitive, but decides not to act on that thought, and instead calls the DA. Meanwhile, Spidey swings off, frustrated over the whole situation. He worries Black Cat is playing him, coming on strong to lure him into some kind of trap.

That recap of his relationship history done (No Betty Brant?), Spidey swings over to the penthouse apartment Felicia is living in. He finds her investigating a very expensive stolen statue, which she says has turned up in New York.

Trouble already. Felicia says she’s sorry and to forget the statue, they make out a little, she wants to see his face, and he freaks out and leaves. She thinks about how he’s definitely worth changing her life for (I mean, how could she know, at this point?), but the picture of the statue still taunts her. Later, Spidey swings onto campus at ESU and switches clothes. He says he keeps thinking he needed to do something today, but can’t remember what.

Pete’s so high on The Black Cat that he just sits down and writes the whole paper, turning it in on time and feeling really confident about it. Phil Chang has noticed Peter’s new attitude, and asks if he’s got a new lady in his life. Peter demurs, but the truth is obvious. And what’s his new beloved up to? Well, later that night, she’s stealing that statue, of course. Nobody changes their whole lifestyle and mindset overnight, after all. She’s the best cat burglar in the world, so the heist is no problem. But the getaway is another story, as Spider-Man is waiting for her outside. He’s obviously upset. She says she’s let him down, and she’ll put the statue back. He says they’ll put it back together, and then they’ll have a long talk. But Cat doesn’t warn him about some of the security measures, and soon alarms are going off.

Spidey tries to talk their way out of this, but Galvagno hits a button and automated machine guns come out of the wall and begin firing on our hapless couple.

Spidey takes out the guns and rips open the steel door, to Felicia’s shock, where he’s confronted with the goons again. He takes out their leader and makes for the exit, but in shoving Felicia to safety, he gets shot in the leg. He falls to the ground, but uses the chance to get close to the goons. As they crowd around him, he makes short work of the lot, and then swings off to find Felicia.

This isn’t going to well. She steals a motocycle and takes off, but Spider-Man is Spider-Man, bullet in the leg or no, so he catches her in no time, webbing the bike as she reaches the waterfront. She means to escape in a boat, but…

(Romita will reuse that Spidey pose on the bottom right a lot in his career) Spidey searches for Black Cat, but it’s dark out and darker underwater, and with his bad leg, he’s forced to give up without finding her. Soon, the cops have come, and Spidey is giving a statement while medics attend to his leg. Jean DeWolff is there, of course.

Downer ending! Time and again, Jean DeWolff has proven to be a real friend to Spider-Man. It sure is sad The Black Cat is super, super dead now. Forever. Sure, she fell to a watery grave the first time she and Spidey met, only to turn up alive later, but I’m sure it’s permanent this time. What a shame.