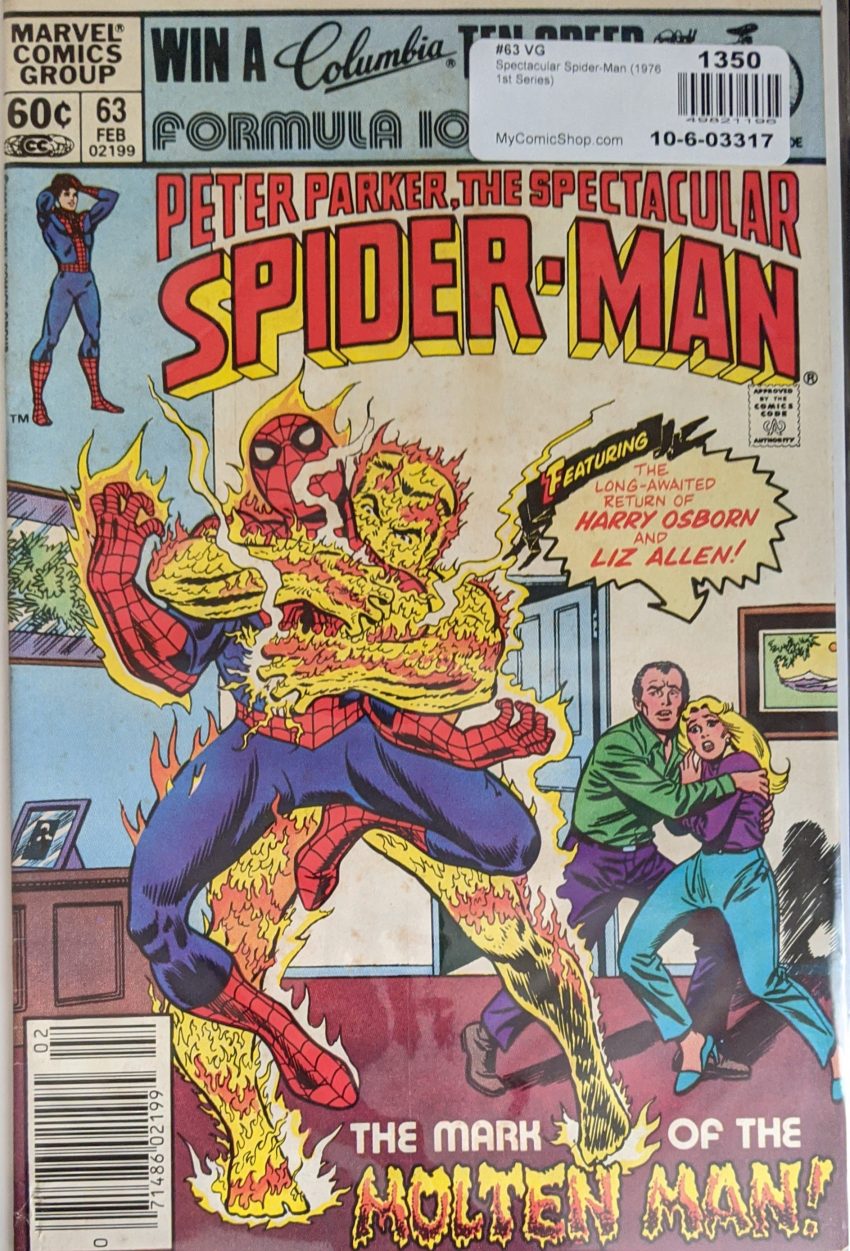 Greg LaRoque swaps in on pencils this month. The long awaited return of Harry & Liz. Reading these things out of order, I have no concept of how long they’ve been gone. I’m not sure they officially even went anywhere. Maybe it will be explained. Seems like poor Liz can’t ever come back from being away for awhile without The Molten Man coming with her. We get off to a weird start, with a cartoonish pyromaniac getting ready to burn down a newly finished hospital when suddenly it bursts into flame from within before he can do it. Soon the whole building is engulfed in flame and Spider-Man joins the firefighters on the scene.

I wish he hadn’t! Spidey saves the firefighters by webbing up a barrier above them, but then sees a commotion below and drops down to the street. Lt. Keating, suddenly not a Spidey hater under a new writer, says his boys have found the “known pyromaniac” from page one, caught red handed. He insists he wanted to burn the hospital but didn’t get the chance. Then furious people in the nieghborhood rush the cops, out for blood after seeing their brand-new hospital burn, and Spidey has to throw up a 2nd barrier this evening. So now the people think he’s a menace like The Bugle said, etc, etc, you know the drill, and he leaves.

A clue! Spidey goes home to try to call Harry Osborn, but it turns out his phone has been cut off because he couldn’t afford to pay the bill.

Is that legit? Did Harry & Liz get married off-panel? That seems pretty lame. Also, the thought balloon that should’ve been a word balloon at the bottom there is pretty confusing. Flash tells Peter that The Osborns live in New Jersey now, and he heads off to see them. Flash and Peter both think about how close they used to be and how they haven’t seen each other in awhile. And I guess neither of them has seen Harry in awhile, either. And, thinking about it, I guess that’s true. No one’s really used the old gang in many years now. TAC has had its grad school cast, and ASM hasn’t focused on the supporting cast much at all outside Deb Whitman. Kinda weird. And more evidence that the Spider-World has been going through a rough patch. But also another thing about to be fixed. Eventually. Spider-Man reaches The Osborn home in Englewood, and…

The Molten Man, of course, Liz’s brother. Spidey apologizes as they begin to wreck the house, with Harry saying Liza had almost convinced her brother to turn himself in when Spidey showed up (Whoops), and then MM gets him in a burning bear hug.

Aaaaaaalright. For those playing along at home, Mark Raxton was trapped underground there for roughly 6 years our time, but who knows how long it’s supposed to have been Marvel time. Anyway, Harry has a little personal crisis, thinking how they came here to hide from the craziness of their past and it just keeps catching up with them. Then he picks up a chair and whacks MM over the head, saying he’s through letting other people fight his battles for him. And, like, ok, good for you, but that guy is on fire.

For all Spider-Man’s talk of being burned, his costume looks fine. After some more serious property damage, MM tackles Spidey outside, where Harry tries spraying him with a hose. Hey, worth a try! It distracts Molten Man long enough for Spider-Man to notice a pool out back and think that might do the trick, But then…

You can always count on Bill Mantlo for some overwrought script. “The serpents chasing them out of Eden!” Yeesh! But I had been confused by Molten Man being on fire in his last few appearances. I think of him as just a metal man, and that’s how he looked in the early days. Maybe this is where he changed back to just metal instead of being on fire all the time. Whoever  makes those fireproof undies he wears is probably rich.