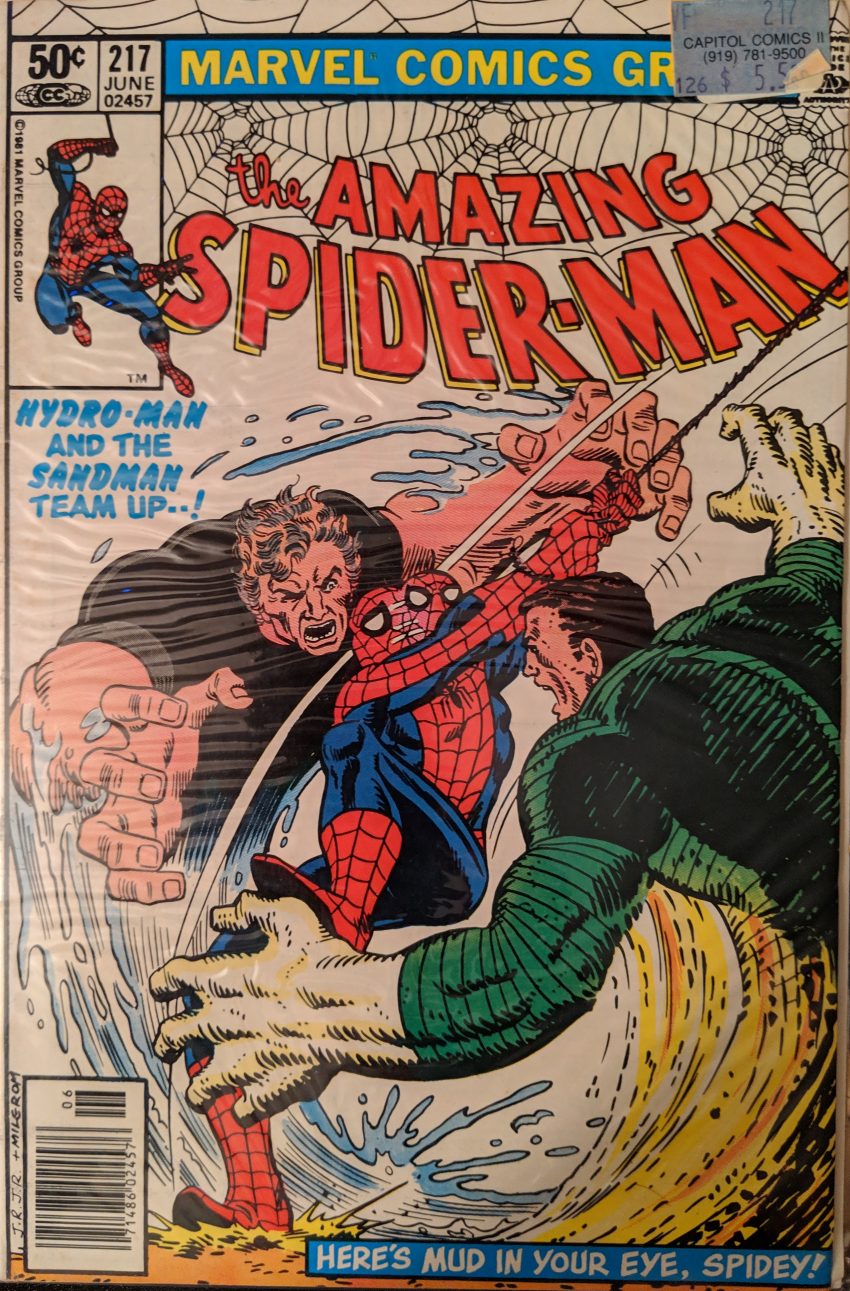 So it’s only Hydro-Man’s second appearance they’re already gonna do the thing where he merges with Sandman and becomes a mud man. Look at this cover, you and I both know it’s coming. They did not waste time.

Now, this is getting ridiculous, this issue picks up right after the next one. This is a story that’s stretched over 7 issues so far, and it’s going into at least one more based on the covers! Denny O’Neil, you have to leave gaps for the 2 other Spidey series to take place in! Sheesh. Like, it is literally seconds after the end of last issue as we get started. So, the cops show up after Spidey has given his all to stop these two shooters.

Friends, I had to put the book down for a second. This is… the… stupidest twist… in the world. I am simply gobsmacked. He just HAPPENED to be in THAT water tower. I’m gonna need a minute.

Ok, I think I’m ok. This… no, ok, I’m ok.  This is so bad. I’m ok! Ok. Hydroman (I think they’ve dropped the hyphen) escapes down a drain pipe, and the exhausted Spider-Man escapes, too, while the cops are gawking at it. Spidey thinks maybe he’ll go catch a movie to relax. He heard “that new murder mystery” has opened at The Griffith.

Halloween II ! Halloween II is “that new murder mystery!” And Peter can’t wait to guess whodunit, and then Deb Whitman and BIFF RIFKIN come out of the theater and biff spoils the ending for him, ruining his day. You’ve seen Halloween II, probably, you know how it ends:

(That is not how it ends, don’t @ me) Oh man. Like, if we assume this was done Marvel Method, and I more or less do, there’s no way O’Neil could’ve written the dialogue without seeing the marquee. He just had a bit and barreled on through. Oh maaaan. I want to see the Marvel Universe version of Halloween II. I guess an ol’ grandmother blows up Michael Meyers! Holy CRAP this issue is sending me off on tangents…

Elsewhere, Hydroman returns to the bar we saw him in last time, so he can use his alleged love interest, Sadie, for a place to crash, but she’s makin’ sweet eyes at… The Sandman.

Well. Not hard to see where this is going. Meanwhile, Peter Parker comes home, dejected as ever. He passes the cowboy in the hall and thinks he can get a good night’s sleep while he’s out. He also sees a very short and dapper gentleman he’s been noticing around in recent issues on his way out, too, and wishes the cowboy could be more like him. Well. Not hard to see where that’s going, either. Peter lays down to sleep, and “precisely two minutes later,” the country singing begins. He get so mad he accidentally punches a hole in the wall trying to just bang on it.

Mm hm. There you go. Lonesome Pincus. As Peter is meeting Lonesome, Hydroman want Sandman to know he can’t be “pawin’ his girl,” and it’s fightin’ time.

But then the unexpected happens: Sadie gets them to stop fighting and go for a walk while telling them they have everything in common and would make a great team. And the walk quickly turns into a crime spree, as Sandman and Hydroman start stealing thing to impress Sadie. A TV, a mink coat, it’s going down. The next day, at The Daily Bugle, Peter finds out that Hydroman and Sandman were seeing fighting at the bar last night and goes to investigate. A barkeep in the Law & Order “working while talking” mode tells him where Sadie lives. And at Sadie’s place, tensions are running high and Sandman and Hydroman are not getting along. They start fighting rrrrrrright before Spider-Man comes crashing through the window.

He’s actually doing pretty good against the two goons when Sadie bashes him in the head with a vase (I’m surprised she didn’t assume Spidey was here to vie for her affections, also). While he’s stunned, Hydroman blasts him out the window, into a storm. As the cops show,  Spidey puts some distance between him and the villains and tries to ambush them, but it doesn’t work out. They chase him down to the docks, where he realizes he can pull the oldest trick in the book…

Well. They crashed right into each other. What could possibly happen next?

Man, this one… this one really came at me. Let’s see how this whole insane mess wraps up next issue. I hope it includes Denny O’Neil’s description of that tragic love story also released in 1981, Raiders of the Lost Ark.