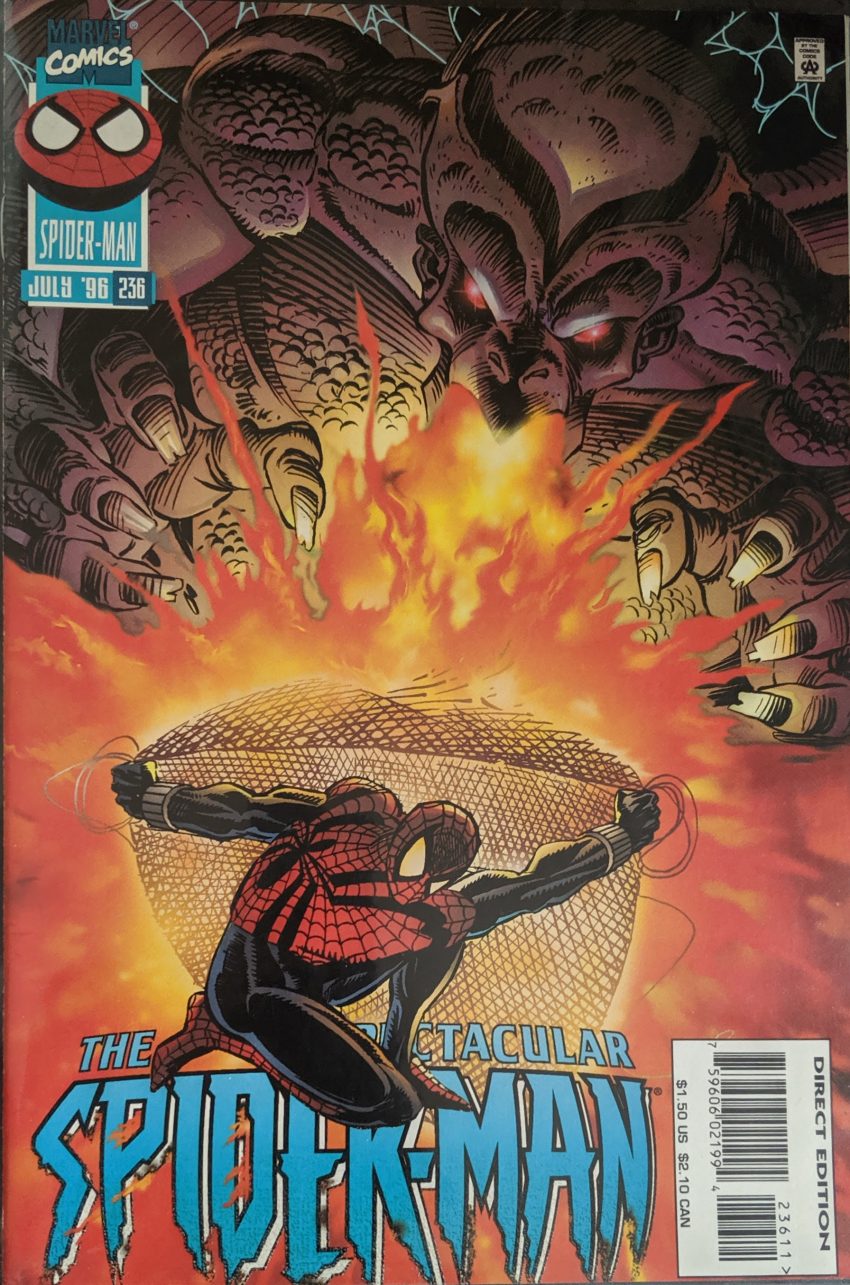 Aaaand, we’re back with Dragon Man. And yet, Peter Parker is being rushed into the hospital after his episode last post.

MJ worries that Peter is degenerating like the other clones have, while Ben… picks up the Dragon Man fight over Will O’ The Wisp’s unconscious body, right where we left them last month.

Like… how did this happen? What a mess. Also, I just flipped past the same Kool-Aid ad that was in the previous 2 comics, but there’s no Kool-Aid in this one. Did I drink it? Did they only put the samples in the $1.95 comics? I don’t know. At any rate, Spidey does his best to keep the guards from getting charbroiled, and then tries to deal with the rampaging Dragon Man by calmly talking to him. And it’s kinda working, DM stops rampaging. But then, the oldest cliche in the book, one of the guards picks then to shoot.

Wah wah. Back in Rye, New York, Jonas Harrow is furious Will O’ The Wisp isn’t responding anymore, and send some kinda kill signal to his implant, but of course, that was removed last issue, so he’s cool. He’s so cool he’s removing a similar implant from Dragon Man, causing him to collapse. Harrow’s Roxxon employers are none-too happy about all this. Meanwhile, as a fresh wave of guards heads toward the former battle, a mysterious person sneaks into their armory. Who could that be? I assume we’ll find out later.

Back at the hospital, Peter’s doctor tells Mary Jane whatever’s happening to him is playing havoc with his metabolism, and his condition is deteriorating. Oh, no. Meanwhile, Dragon Man flies back to Roxxon, seemingly under Harrow’s control, with a red & blue stowaway on his back. Once they get in, Will O’ The Wisp also appears, but Harrow’s minions manage to regain control of Dragon Man, so it’s a fight again. DM & Spidey go smashing through the big dish I guess Harrow was using to control everybody.

Unlikely friendships abound this month. Wisp threatens to kill Harrow, but only scared him, to Spidey’s surprise.

And that’s that. But poor Peter is still dying or whatever, so we’ve got that to worry about. And that’s not all! Come back next time for the most dreaded villain of all: hideous art work!