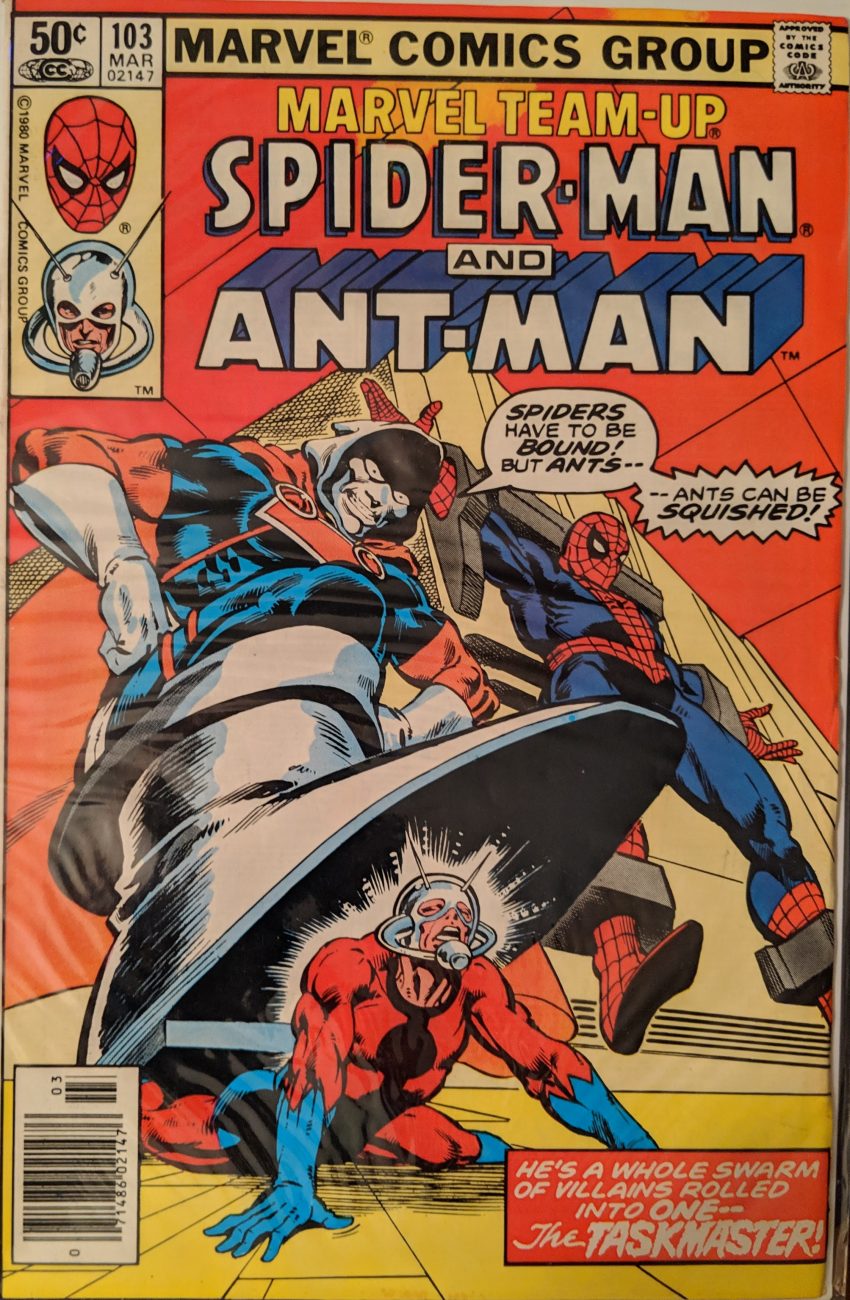 I haven’t even opened the book and Taskmaster’s dialogue has made me uncomfortable. Future Spidey scribe David Michelinie makes another early appearance on this blog, along with artist Jerry Bingham & Mike Esposito. We begin with Scott Lang under the gun.

He’s trying to get his daughter, Cassie’s ROM action figure fixed before she gets home, and finishes with seconds to spare (ROM, Spaceknight is a little-known toy from the era that wound up being a long-running and beloved Marvel Comic by fixture of this blog, Bill Mantlo). The relatively new hero barely gets out of his Ant-Man suit in time. 9-year old Cassie wants to make dinner, “preztels & cheese!,” and Scott goes along with it. I’ve never read early Scott Lang stuff, but he seems pretty much as translated to screen. Big hearted, smart, a good dad. While they’re eating, an old prison buddy of Scott’s drops by. He doesn’t know Scott’s gone legit, and wants to cut him in on a big crime ring. To his credit, when he finds out, he’s not weird or evil about it, he just tells Scott to look him up if he changes his mind and is even nice to Cassie on his way out. Unfortunately…

Scott sees the news in the paper the next day, and wants justice for his friend. Downtown, JJJ is mad about the same story. He wants to know why a certain part of town’s crime rate is going down even as it goes up everywhere else, and he wants Peter Parker to figure out it.

Pete heads down to lower Manhattan, and does find it a little too quiet, but then a particular building sets off his Spider Sense. Inside, Spider-Man finds a huge armory and barracks.

Spidey keeps sneaking down the halls following the “students” to an auditorium, and there he finds Taskmaster. I guess he’s new on the scene at this point, Spider-Man’s never heard of him, and a footnote says he’s from Avengers 195-196. He helpfully explains this is his newly established Manhattan training academy for supervillain goons. Taskmaster’s gimmick is “photographic reflexes.” As soon as he’s seen someone do something, he can do it, too. And he’s recently fought The Avengers, so in spite of looking kinda silly, Taskmaster is no joke as a villain. Obviously, it’s fightin’ time, and T-M counters everything Spidey can throw at him with ease, using Captain America’s shield-slinging, Black Knight’s swordsmanship and Iron Fist’s martial arts prowess. He even has a cane like Daredevil’s to ricochet around the room like DD would.

Spidey’s down, but just about then, Scott Lang shows up outside. He’s come to the place his friend Gus told him about, and then he recognizes one of the goons going in, an advantage most heroes wouldn’t have. So he just walks in and pretends he’s taking Gus up on his offer to join. Once he gets in with the rest of the new recruits, he’s in for a surprise.

Now Scott knows who his enemy is, and he needs to help Spider-Man. T-M sends the new recruits away to be prepped for a challenge, and tells his goons to kill Spider-Man. But when they decide to unmask him first, things get a little weird.

All these references to Avengers 196 made me look it up. Guess who’s writing Avengers in this era? Also: Guess who created Scott Lang? You’re right, of course, it’s David Michelinie! Ant-Man catches Spidey up on his recent experiences with Taskmaster, and then they convince the guy covered in ants to tell them where the training exercise is happening. It’s here:

Sounds appropriately dangerous! The goons attack immediately, a whole army of them, saying they get a “gold star” for every cop they kill. Taskmaster don’t play.

He’s really in his element here. The heroes arrive, of course, and it’s an all-out battle between an army of goons, 1 supervillain, 2 superheroes, and a colony of ants. Taskmaster orders his men to kill the guards so he can escape as our heroes stop them. They chase him down, anyway, to a plane he plans to escape in. He keeps countering Spider-Man at every turn, so Ant-Man realized he needs to do something T-M would never expect.

Taskmaster sets off a magnesium flare and escapes while the heroes are blinded. But they’ve stopped his NY school, so at least they have that going for them. There’s only time left for a bit of comedy business.

It’s been a rough couple issues of Team-Up, but this was a fun one. I always liked Taskmaster as a villain, and I can’t get over how faithful the movie Ant-Man is to this stuff. I had no idea. As you will note from the caption, the next issue of of MTU doesn’t even have Spider-Man in it, and neither does the next one, so we’re skipping those. I got them in my giant haul of MTU issues, and I’ll read them someday, but not for this blog.