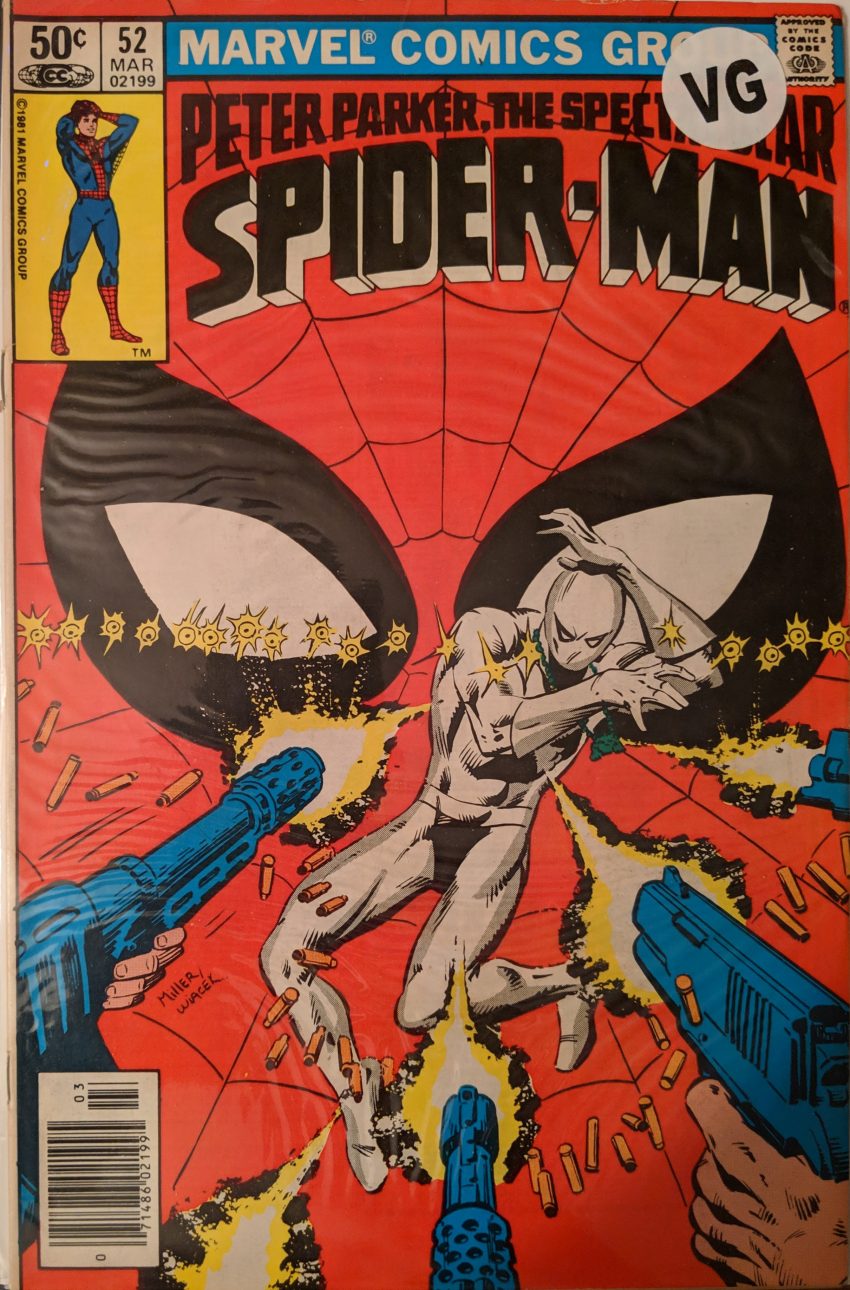 Roger Stern is joined by the great Rick Leonardi on this one, with Jim Mooney inking, and things are looking grim from page one!

Man, I am a big fan of Leonardi, and even I wouldn’t know this was him if the credits didn’t say so. I guess this would be very early in his career, and I don’t know how much of it is that and how much of it is Mooney’s typically smothering, Romita-y inks. Anyway, our pal Hector Ayala, The White Tiger, is in bad shape, but not dead. Peter gets a spider tracer on the car as it speeds away, but runs back to be with his friend. Then JJJ & Robbie show up.

Under a good writer, when the chips are down, Jonah always turns out to be a real human being. For all his hyperbole, deep down, he cares for the people he knows (Under a good writer). Peter jumps in the ambulance, insisting on riding along as a friend and a witness.

A+ JJJ & Robbie content, man. That’s the good stuff. In the ambulance, Hector wakes up and weakly tells Peter what’s been happening in his back-up stories the last few months. His whole family was murdered. He hunted down the killers, but it was a trap. Hector was shot up by the absurd villain Gideon Mace, a man with a giant mace for a hand, who wants to kill as many heroes as he can. With that exposition out of the way, Hector passes out. They arrive at the hospital, and are about to take his amulets off when Detective Nathanial Byrd, who everyone calls Blackbyrd (Rrrrrrrrracist) shows up and tells them that will kill him. He’s been skulking around those White Tiger back-up stories, too. He’s apparently from an early Spectacular story I don’t have. I imagine it was bad. Anyway, Peter tries to talk to him, but when “Blackbyrd” find out he’s a new photographer, he refuses to talk. So Peter switches to Spider-Man, who apparently has a good relationship with him.

It’s definitely that Leonardi just hasn’t found his style yet, the Spider-Mans in this issue are way too stiff and generic. When we see his work in the future, his stuff is going to be slick and dynamic. So, Spider-Man swings off to find Gideon Mace. Not sure why he had to talk to Blackbyrd first, really. He sets out to find his spider tracer, and he gets a hit, but it turns out to be the pigeon he hit by accident in #49. That’s a nice touch. He retrieves that tracer, but he’s no closer to justice. Our scene changes to a junkyard, where paramilitary lookin dudes are crushing the car to hide the evidence. But then a Spider Signal shines down on them.

One of the goons radios back to their base that Spider-Man is after them, but his transmission is cut short by a punch in the face.

Mace tells Spidey to meet him at the Eastside National Guard Armory, and a very angry Spider-Man heads off to do so. Mace, of course, sets up his troops & compound to repel an army, with landmines and all that. We cut away to the doctors amazed that they’ve pulled 7 bullets out of Hector and he’s still alive, his amulets glowing bright, and then it’s time for a showdown. Spider-Man is troubled that Mace seems to have been able to take over a military facility. Thinking Mace would expect him to come in from the roof, Spidey decides to walk in the front door. His Spider Sense helps him avoid the landmines. He throws a rock at one to set it off, both to make sure it’s an actual explosive and to make sure no civilian can set it off, and triggers a huge explosion. Mace’s goons report he was killed in the blast. But, you know better.

Then Spider-Man bursts in out of the floor. He’s attacked with machine guns are flamethrowers, but his foes only end up hurting each other.

Most of the goons dispatched, Spidey finds his way to Mace, who, in case you were wondering, is legit crazy:

That’s a wrap for the fight. With their leader shot up and Spider-Man furious, the rest of them don’t stand a chance. At the same hospital Hector is in, Mace is wheeled in, still alive. Peter is there in his civilian clothes, and feels nothing but pity for the lunatic. He runs into Blackbyrd, who tells him Hector is, miraculously, going to make it, in spite of having 12 bullets removed today. A week later, hanging out with his girlfriend Holly Gillis (Remember her?) and Blackbyrd, a recovered Hector decides to give up the Tiger amulets. He’s come to see them like a drug addiction, and as the reason his family was killed, and goes cold turkey from them. And then…

Unfortunately for Hector, that’s not the end of his story. But it’s the end for a long time, at least. He wouldn’t appear in comics again until the early 2000s, framed for murder in Daredevil, in a story where he wound up dead. It was a lame turn, one of the only weak spots in Brian Michael Bendis’ killer DD run. The White Tiger persona was passed on first to his niece, and finally to a newly created sister who didn’t die in the above events somehow, who is the White Tiger today. And that White Tiger, Ava Ayala, was a regular cast member of the Ultimate Spider-Man cartoon, kind of bringing things full circle.

I wonder if Stern just thought having a 2nd superhero in the cast was too much. It’s a valid point, I think, but I also think it was a novel idea for Peter to go to college with another hero, especially once Hector’s identity was made public.

Due to a scheduling mistake on my part, there’s posts this weekend. This was easier than shifting my schedule when I realized I messed up.