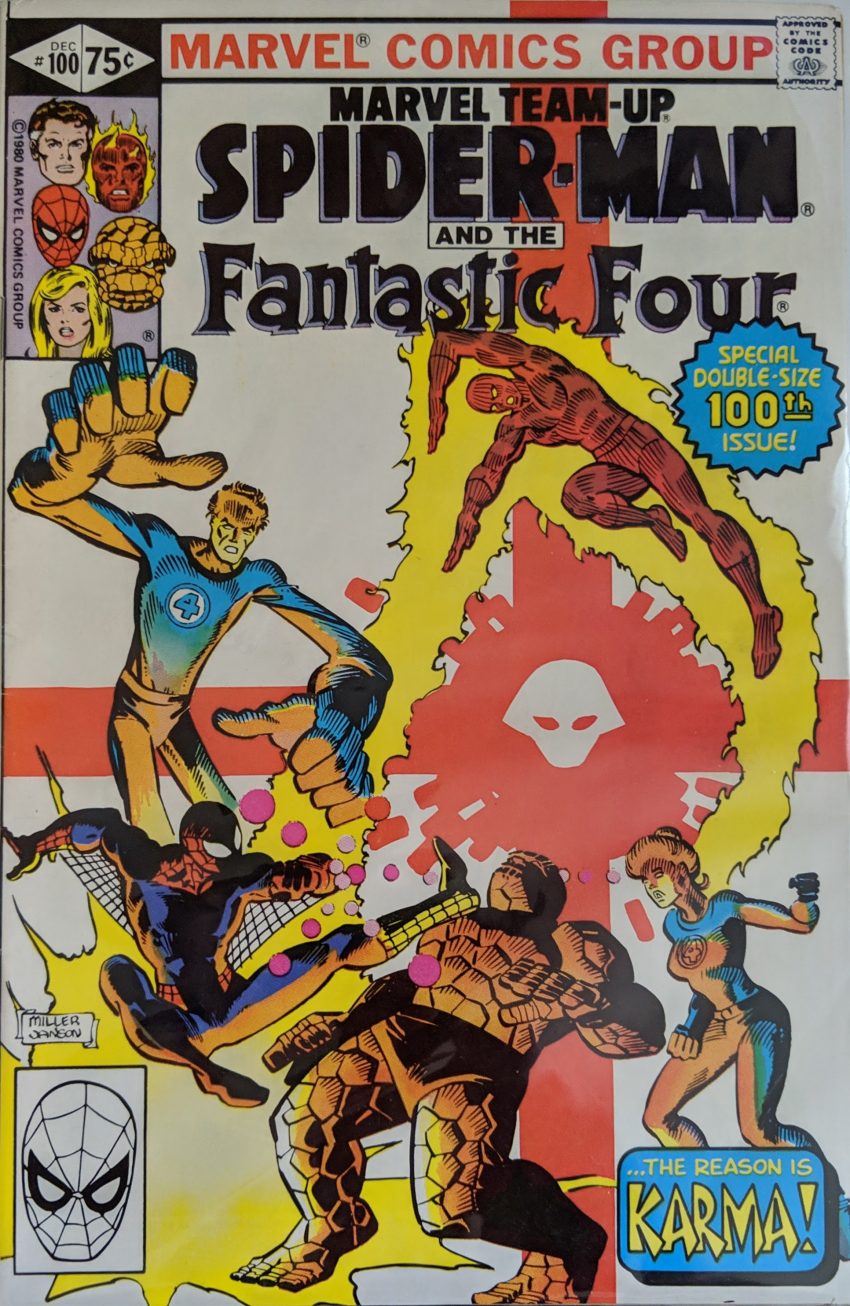 Big Anniversary issue! We got Chris Claremont back for one more issue, Frank Miller penciling and Bob Wiacek inking to mark the occasion. Daredevil is only publishing 6 issues a year at this point, so I guess Frank just has a lot of spare time. The month after this, he introduces Elektra. No big deal, right? But this isn’t a DD blog, so let’s see how Spidey & The FF are gonna get together here. Page 1 announced in huge text that this issue introduces Karma, “She can possess people!” and she is getting work on Spider-Man as he passes over head right on the first page.

The mysterious Karma gains complete control of Spidey and has some fun using his powers, climbing walls and shooting webs.

Well, that’s rude. We move our scene to Freedom Tower, where one Nguyen Ngoc Coy, once a Vietnamese general, now a millionaire, is hosting a fancy charity dinner, and Reed & Sue Richard, Ben Grimm & Alicia Masters are in attendance. The General introduces his nephew, Tran, and his two very young siblings before shooing them off to bed. The FF gang don’t seem to trust The General too much, and as the kids are carted off down the hall, the mind controlled Spider-Man appears. Karma thinks she needs to free them, but the buzzing in Spidey’s head freaks her out, so she’s totally unprepared for…

As Karma-Spider-Man tries to flee the scene, she notes that Nguyen is her uncle. Sue steps in, but she holds back, and Spider-Man is able to overpower her. As most of the FF keep trying to stop him, Nguyen gives Tran the word to deal with the situation.

“The young Vietnamese” sure is a weird way to refer to him. Poor Spidey gets a face full of The Thing’s fist as he’s coming back to normal, and is knocked out. The FF take him to The Baxter Building, and when he wakes up, he has no idea he did anything tonight. He’s freaking out as Reed loads him into a giant Kirby-esque “encephalo-scanner,”  which reveals his brain was more or less dead for an hour and half tonight. The scans reveal a familiar energy to Reed, which has him put in a call to Charles Xavier. He says Cerebro detected 2 similar mutant energy signatures tonight, but they weren’t like anything he’s encountered. Reed declines The X-Men’s assistance, whips up his own Cerebro, and leads the FF & Spidey to a church Spidey’s assailant is in.

Spidey’s barging in gives Karma a chance to possess The Torch, so we get still more mind controlled two heroes fight action.

So now it’s origin time. The priest met Karma while serving in the Vietnam War. Karma’s real name is Xi’an (Pronounced “Shan”) Coy Manh. She’s from South Vietnam, where she & her brother learned of their powers when the Viet Cong attacked their home. Tran mind controlled a dude and killed him, and enjoyed doing so.

When Xi’an refused to use her powers in her uncle’s employ, he kidnapped the smaller children and held them to ransom. Xi’an saw A Daily Bugle call Spider-Man a menace and decided to “use a criminal to defeat a criminal” and here we are. The FF vow to help, but Spider-Man’s a lot farther in than that. He’s enraged by what she’s been through and says “heaven help whoever tries to stop them” from helping her.

That was easy. Naturally, Tran knocks out Xi’an and then manages to get a mental grip on the entire FF!

There follows a long and crazy fight where Spidey actually holds his own against the whole team for awhile as Nguyen takes the chance to flee. Tran reveals his plan to take over the criminal empire for himself (No surprise there), and The Thing is about to smash Spider-Man with a big wooden post when Xi’an wakes up.

Abrupt! Karma would go on to join The New Mutants a few years later. Not much Claremont did escaped the gravity of the X-Men for long. The rest of the issue is a Storm/Black Panther team-up by Claremont & Byrne, a rather important one that first established a poast between T’Challa & Ororo that ended up being a stepping stone to their romance in the 21st Century comics, but that’s outside our purview.

Claremont’s grasp of Vietnamese is bad enough that even I can tell. Everyone has surnames for given names, and “Xi’an” isn’t even Vietnamese. About the level of accuracy and research you could expect from a comic writer back then, I guess.