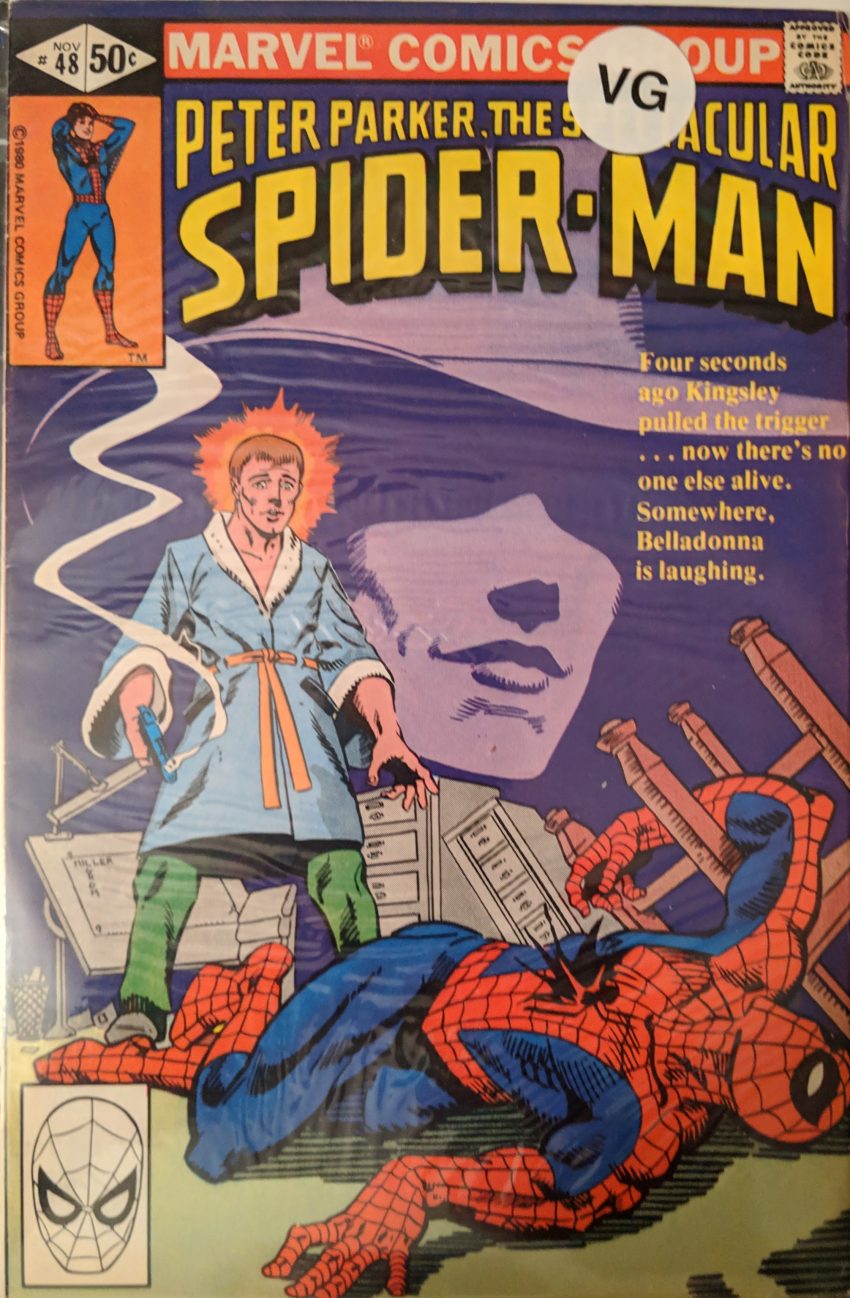 As Bellandonna continues to taunt Spider-Man through the porthole in her death room, Spidey webs up some masks for himself and the new Prowler to fight off the gas, and eventually manages to smash out the window.

He quickly discovers Belladonna was never actually there in the first place, just projecting herself onto the window. Spidey lugs the unconscious Prowler out onto the street and lays out for the cops why he’s their actual guy for the murder last night. Sergeant Snider appears and tells Spider-Man he needs to give a statement and cooperate so they can actually convict this guy, but Spidey just leaps away, as usual. Even he doesn’t know why, and spends the trip home psychoanalysing himself for it. He gets home and takes a shower, and then discovers the lamp in his living room doesn’t work. In short order he gets a phone call from JJJ giving him grief for working at the Globe. Pete becomes pretty sure JJJ wants him back at the Bugle, and given how weird and gross the situation at the Globe is getting, that might be a good idea. He’s preparing to fix his lamp when Deb Whitman knocks on his door.

Was she gonna leave a note or something? She’s surprised to see him and can’t come up with a good reason to be here. He invites her in while he works on the lamp, and she acts uncomfortable because he’s only wearing a bathrobe.

Oh, Deb. Also: Is that really a bear? Looks like a dog, I don’t know. Deb suggests throwing it in the bathtub, but Pete’s Spidey gear is in there, so he makes an excuse about dark room chemicals and puts the fire out with his living room curtains, which melt onto it. After this wacky adventure, Pete gets dressed and dumps the bear/dog on the trash and he & Deb go out for coffee. Deb Whitman didn’t get her feelings hurt for once, hooray! Some random dude comes by and takes the bear/dog off the trash immediately. Kinda like when Peter left his microscope on Uncle Ben’s grave back in ASM 181. Can’t put anything down for a second in this town. Meanwhile, at the hospital, the new Prowler wakes up…

Real smart keeping those gloves there, officer. He steals a car and escapes, meaning to find a way to exact revenge on Belladonna. The next day, Peter checks in with Aunt May, who won’t have time for a visit today because she’s “going motoring with a friend.” Nursing home life seems to be treating her well, and Stern, at least, seems to be taking the chance to make her less frail and not always on death’s door like she had been for the last, uh, entire history of the character. It’s not the dramatic, frankly impossible de-aging she’s had in the last few years of comics, but it’s a good decision. nstead of visiting Aunt May, Pete heads over to the offices of the place that rents the loft he was almost killed in last night…

Well, well! Swinging across town, Spidey puts it together:

He swings over to her place to confront her, but gets her sister instead the questionably named, Narda Ravanna, who jumps right into telling him their whole backstory. How her sister inherited a business from her 2nd husband, and how they turned it into a huge success, creating fashions and cosmetics. How Roderick Kingsley tried to sabotage them by having a model claim their cosmetics cause skin disorders, and how the bad publicity ruined them.

The twist! Narda/Belladonna tells Kingsley Spider-Man works for her now and is on his way to kill him. Then she calls up her goons and tells them to meet her at their lair. It’s all going down. In transit, Spider-Man has doubts about all this. Why would Belladonna be dumb enough to rent the death trap loft in her own name? He gets to Kingsley’s and watches through the skylight, waiting for something to happen. At the same time, Desiree Vaughan-Pope appears back at her place, having been napping instead of going to Kingsley’s, and Narda calls the cops to tip them off that something’s going down at Kingsley’s place. Then:

Well, that’s it. Spider-Man is over. It’s been a good run, folks, thanks for reading. Wait, there’s more pages? Oh ok. Well, the cops burst in and Narda confirms over the bugs planted in the place that Spider-Man is dead. She rolls out to her hideout, everything coming up Millhouse, but she’s got one problem: The Prowler shows up hellbent on revenge.

He decides to toss her off the balcony, give her the same death as the man he accidentally killed, when Spider-Man shows up! Whaaaa? Outside the apartment, Belladonna’s goons (Named Manny, Moe & Jack) finally notice something’s going on and burst in just in time to see Spidey lay out the new Prowler. Then Spidey helpfully explains how he’s not dead, and it is LABORED, man.

The guys in the Pep Boys logo are named Manny, Moe & Jack. also, I think it’s obvious that balloon was meant for Spider-Man. This is a very strange bit, bad execution is the last thing it needs. Anyway…

You can tell pretty quickly why Stern graduates to Amazing soon. His stories are snappy and unusual, much more interesting than anything in the last few years. And, especially with Amazing clearly in a kind of transitional period, Spectacular is starting to feel like the “main” Spider-Man book. It only makes sense to bring Rog over to the big stage.