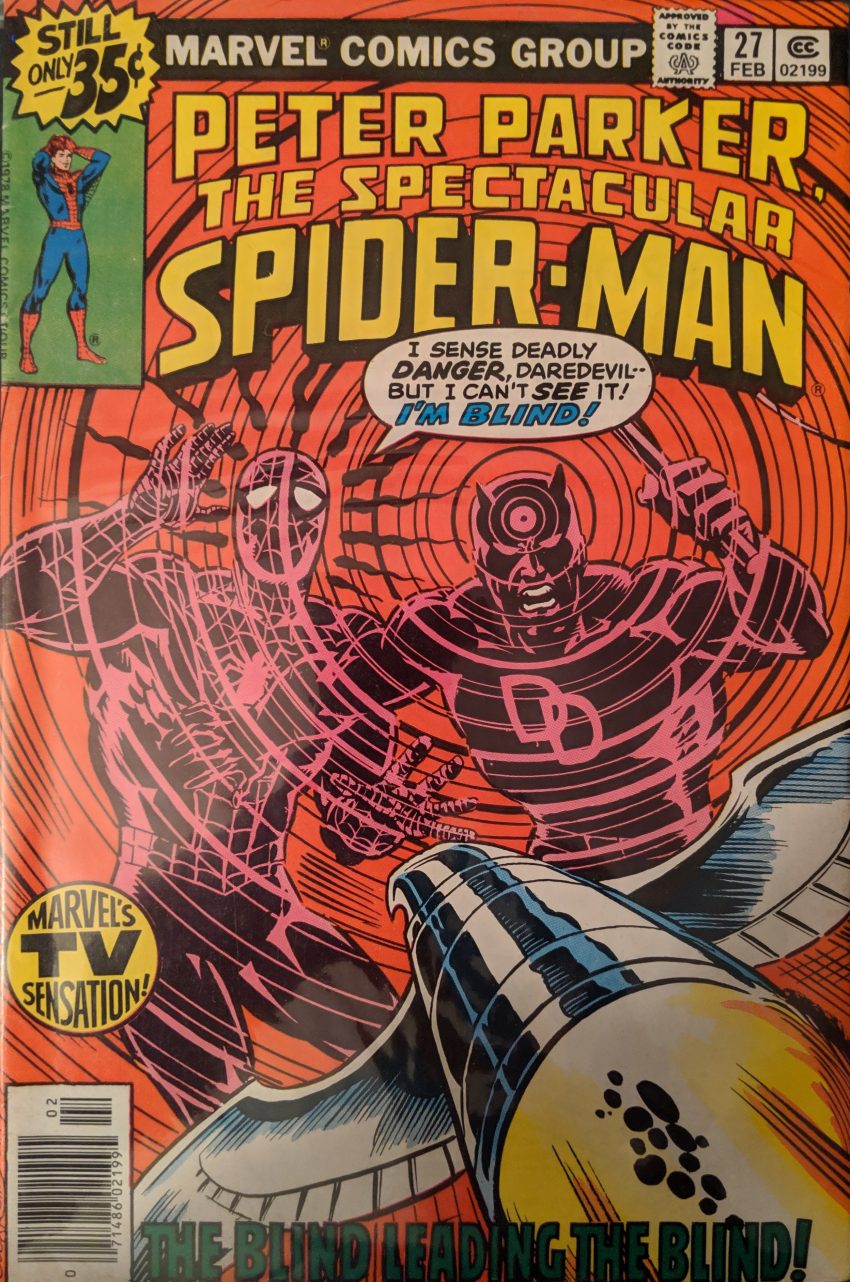 Special guest artist Frank Miller joins the story now, already in progress. Yeah, that Frank Miller, years before he put both himself & Daredevil on the map with his legendary run on the title, here drawing DD in Spider-Man. That’s fun. The issue opens with DD seemingly trying to teach Spider-Man to webswing blind, but it’s not going well, as you’d probably imagine, and DD has to save him from falling again. Spidey kinda loses it, panicking and freaking out about losing his sight, which leads to one of the most one-sided “Two Heroes Fight Over A Misunderstanding” fights of all time.

When Spidey wears himself out, DD takes him to his office and then recaps his origin for us while he calls one “Dr. Orlock” and tells him he has a patient. Meanwhile, Betty & MJ leave Peter’s apartment, I guess having not gone in and been killed by Carrion and what have you. Good for them. In fact, they have… become friends?

Boy, nothing like being into the same dude to bring two people together. MJ is totally out of Peter’s life in ASM, Bill. You’re completely blowing it with MJ here. Ah, well. Spidey’s landlady, the irascible Ms. Muggins, hears a bunch of noise coming from his apartment, even though she heard from the girls he’s not home, and goes to investigate only to find it trashed with “THE DEAD WALK PARKER” scrawled on the wall. Carrion, now floating outside, is apparently just a vandal now. Over at Dr. Orlock’s office, DD brings his patient by. The doc says Spidey’s optic nerve is looking good and healing quickly, but Spidey throws a fit because he knows the Masked Marauder must be planning something horrible and he can’t stop it. Calmed down, he and DD head for the roof. He explains his whole Spider Tracer thing…

Once they get in range of the tracer, DD notes that he can sense it, too, but doesn’t tell Spider-Man so as not to distract him. They figure out where Masked Marauder and his goons are (in a panel inker Frank Springer infamously mutilated).

Crazy to see somebody just give up. Jeez, Frank. Spidey reasonably suggests DD should be on his own from here, but DD literally carries him off to the fight. Weird choice. In his fiendish lair, the Masked Marauder has just contacted the mayor of New York on a video call of some sort to tell him his Tri-Man now has a nuke inside, and he’ll blow up New York if it’s not “turned over to the Maggia.” So… that’s kind of a stupid request. DD makes note of how dumb it is as he smashes through the window and starts taking out goons. But he’s not able to stop Tri-Man from rocketing out the window and knocking Spider-Man off-balance, into a fall that will certainly kill him next issue.