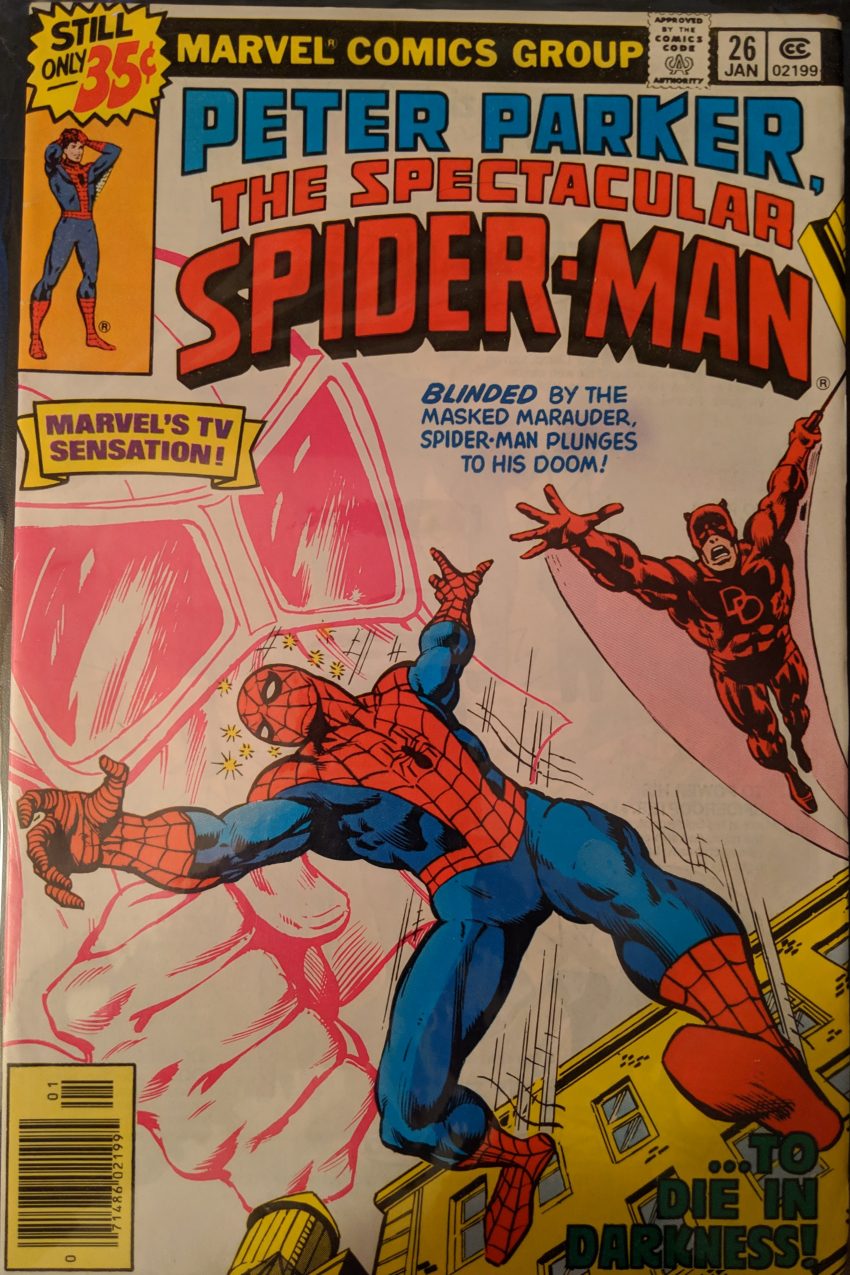 This issue picks up riiiight where the last one left off.

Mr. Marauder says he’s been waiting to blind Spider-Man since Spidey & Daredevil first foiled his plans, which was apparently in DD 16 & 17. That was… a long time ago, man. Like, over 10 years in our time, I think. This is some Mark Grunewald-level pulling an old thread. Revenge is a dish best served well after it’s stopped being relevant. Aaaaanyhow, he helpfully tells Spidey his newly refined Opti-Blasts permanently remove people’s vision. Yet he fires them from his own eyes. Seems like living on the edge to me. He brags about how this has brought him control of the Maggia, as seen last issue. Blind, Spider-Man can only trust his spider sense as the Tri-Man attacks, but he quickly lands on his ankle wrong and sprains it. Now that’s The Parker Luck. MM’s goons tell him the cops have arrived, so they all pack up some loot and head out. Spidey gets a tracer on MM by following his voice (Talent!). Outside, the cops confront MM, and he commands Tri-Man to turn into robo-bird to attack them while MM and his goons jump on their van, which… shoots out a big tube that then transfers them to a helicopter?

This is absurd! The cops try to attack Spider-Man, which he notes is odd since he’s been cleared of wrongdoing, but he just sprays a big blanket of web and swings for it. As he does, for the 2nd time in as many issues, Jim Mooney swipes a famous Spider-Man cover, this time ASM 65.

Shameless! Meanwhile, Betty Brant and Mary Jane both show up at Peter’s apartment looking for him, and it’s awkward. Bill Mantlo is really messing with the whole “MJ is out of Peter’s life” thing going on in ASM here.

Why would Carrion be out there? We’re not gonna be told now, as we switch scenes back to Spidey trying to bumble his way home. He heard a police bulletin that he’s a suspect in the robbery. Across town, Daredevil hears it, too, and decides to get involved, but we immediately cut to the apartment of Hector Ayala, arriving home after his night of crime fighting as The White Tiger. He’s busted by his sister for cutting class to do it, though, and is properly shamed and all. Back to Spidey, who’s been found by Daredevil, who startles him into falling off a building. He tries to save himself with his web, but DD ends up having to swing to his rescue. Safely back on a rooftop, Spidey reveals he’s blind.

I can’t think of anything to say, either, except to be continued…