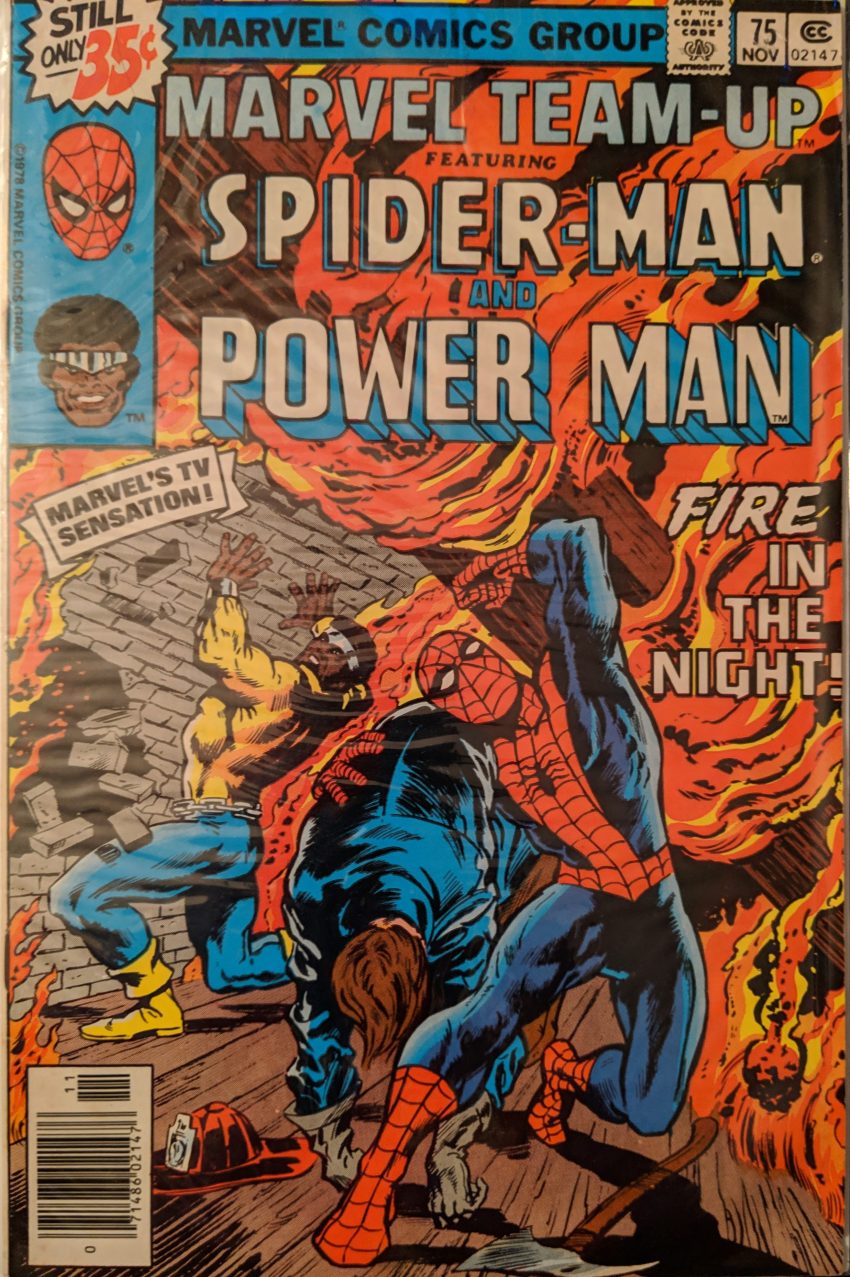 This issue of MTU is a plot by Chris Claremont, with a script by Ralph Macchio (Not that Ralph Macchio), pencils by John Byrne and inks by Al Gordon. Appropriately enough after that cover, it opens with Spider-Man trapped in a burning building!

Spidey tries to escape, but the floor collapses and, trapped by the debris, he flashes back to earlier this evening so we can see how he got here. Because earlier, he wasn’t burning to death, he was at the club!

Well, thank you, it’s only page 3 and I am already completely disgusted. Who is that weirdo? Does MJ regularly make out with 400-year old Dr. Strange impersonators? Eeeeyuk. I appreciate what looks like a last-minute dialogue change to try to square up Pete & MJ out on a date with what’s happening in ASM., but it doesn’t quite add up. Pete heads to the bar and orders a beer! Most writers either keep it vague or say Peter Parker doesn’t drink, but I guess after the horror show he just witnessed, Pete needs some help. Also at the bar: Luke Cage, Hero for Hire! Peter recognizes him from the time JJJ hired him to beat the shcrap out of Spider-Man the day after his true love was murdered, we all know that old chestnut (It’ll be covered here eventually). But before anyone can do anything, a gang called The Rat Pack shows up to rob the place. Pete slips into the bathroom to get in his work clothes, but some of the goons spot him.

Now that it’s a fight, Cage joins in, too, and soon the goons are on the ropes. One of them takes a hostage to make good their escape. Spidey wants to save her, but Cage assure him they’ll let her go, and then they can go beat them on their own turf. Hours later, Luke offers up the exposition:

Spidey runs down the side of the building and tackles the guy getting out of the car while Luke ponders what could drive a man to run around in that outfit risking his neck for free. Then he decides it’s time he made his entrance, and just… jumps through the roof of the building, and…

WHAT? How was that reasonable? If he could survive the drop, why not do that outside? Good grief. Also, great names on these goons. “Sparks.” “Strafe.” “Stitches.” Very cool, very authentic. The goons throw gas in Luke’s eyes, temporarily blinding him, and then one of the dumbies lights a lighter in a basement full of gas fumes, and guess what?

The building goes up pretty quick, and Spidey stops Luke from going in to save survivors, reasoning he weighs too much. He goes in alone, and that brings us to him dying under a pile of flaming beams. Don’t worry, though, Luke smashes his way in and saves him. Once Spidey has been revived by paramedics, he and Luke have to figure out how to get more people out of harm’s way. The firefighters do their thing, but debris falls in one of their buckets, and Spidey goes up to help.

Spider-Man winds up on the roof with the fire chief, who says he got trapped up there by the flames. Down on the ground, the firefighters tell Luke the building has to come down now or the whole block will catch fire, so Luke becomes the demolition crew. They know Spidey & the chief are up there, but there’s no other way. Poor Luke is legit torn up inside about having to sacrifice them to save the neighborhood, but he gets to work. Luckily, Spider-Man is Spider-Man, so…

The ol’ Parker luck. From the vantage of the next building over, they can see Luke smashing down the one on fire, but things take a wrong turn and it collapses on top of him. Spider-Man is horrified and jumps down to start digging him out. Luke’s fine though, he’s Luke Cage. Not everyone was so lucky, though.

And that’s the ballgame. A nice little shout out to firefighters there. I wonder where Mary Jane wound up with that old creepy dude. Maybe it’s a good thing we’ll never know.