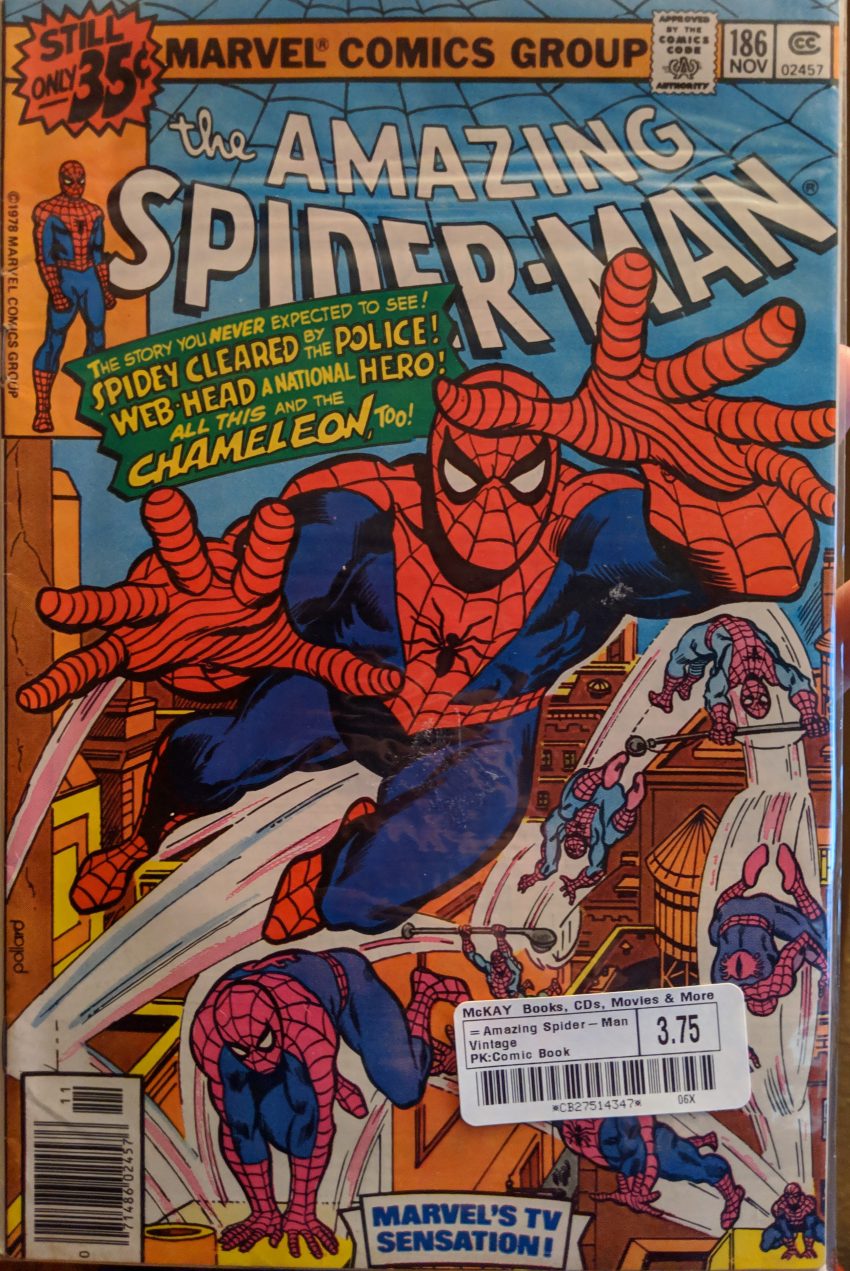 Marv Wolfman and Mike Esposito are joined by new penciler Keith Pollard in this issue, and it’s a big difference. Pollard’s pages are snappier, less draped in shadow and gloom, and his Spider-Man is dynamic. We begin with Spidey helping put out a fire, and then saving a guy on a ledge of the flaming building as news reporters say he must be out here because of today’s startling news. But as he gets the guy down to the pavement, he’s most ungrateful.

The cops say Spidey must not have heard the news. Meanwhile, at The Daily Bugle, JJJ gets this much-discussed news, as well, and says it will make him a laughing stock.

Yikes. That is some outfit on Spider-Man’s oldest villain. Looks like he’s Stained Glass Window Man. Spidey’s off to see Aunt May at the hospital…

Money woes, a sick Aunt. The usual. Peter goes home, brooding all the way, and then Betty Brant shows up. She announces that Robbie has made her his secretary, so she’ll be staying in New York. Then they stay up all night talking.

I am not following his logic here. He needs money, so he’s going to turn himself in for the murders the cops have been chasing him for since ASM 122? What sense does that make? But, see, it finally gets Spider-Man to the DA’s office, so Wolfman can show his hand.

Tower (You may recognize him from the Daredevil show, but then again, probably not) has a full press conference waiting for Spidey outside. Uh, how? How long have these reporters been here? This is so random and lazy. The assembled press wants to know all about Spidey, he calls JJJ “pork face” for some reason, and then he freaks out and runs away, in true Spider-Man fashion. But he says the reporters can find him in Central Park tonight.

This is a pretty big moment, though. Wolfman promised new & different, and a Spider-Man who isn’t wanted by the cops is prrrretty different, indeed. And look at him go! Ross Andru’s Spider-Man tended to look more like he was being towed than like he was swinging, but Pollard’s Spidey is the ball of energy he should be. Unfortunately for our hero, The Chameleon has seen him announce his press conference on TV. We then cut to said press conference, already in progress, where Spidey says he’d probably never join The Avengers (ha), and then Wolfman takes a random shot at the famous Superman Vs. Muhammad Ali special…

…then that old lady turns out to be The Chameleon. And he pulls a gag where only Spider-Man can see him reveal his identity, so it looks like Spidey just beat up an old woman to the assembled press! Take that, Captain Marvel movie, Spidey did it first! Is Spidey’s clean slate over already?

Spidey chases the villain into the Central Park Zoo, where he quickly gets down to business.

He drags Chameleon, now dressed like a cop somehow, out in front of the press, unmasks him Scooby Doo-style and makes him confess, and is once again clear of wrongdoing. Flash Thompson shows up and talks about how Spider-Man has always been a hero, JJJ throws a fit…

Now, who could that be? We probably won’t wait long to find out.