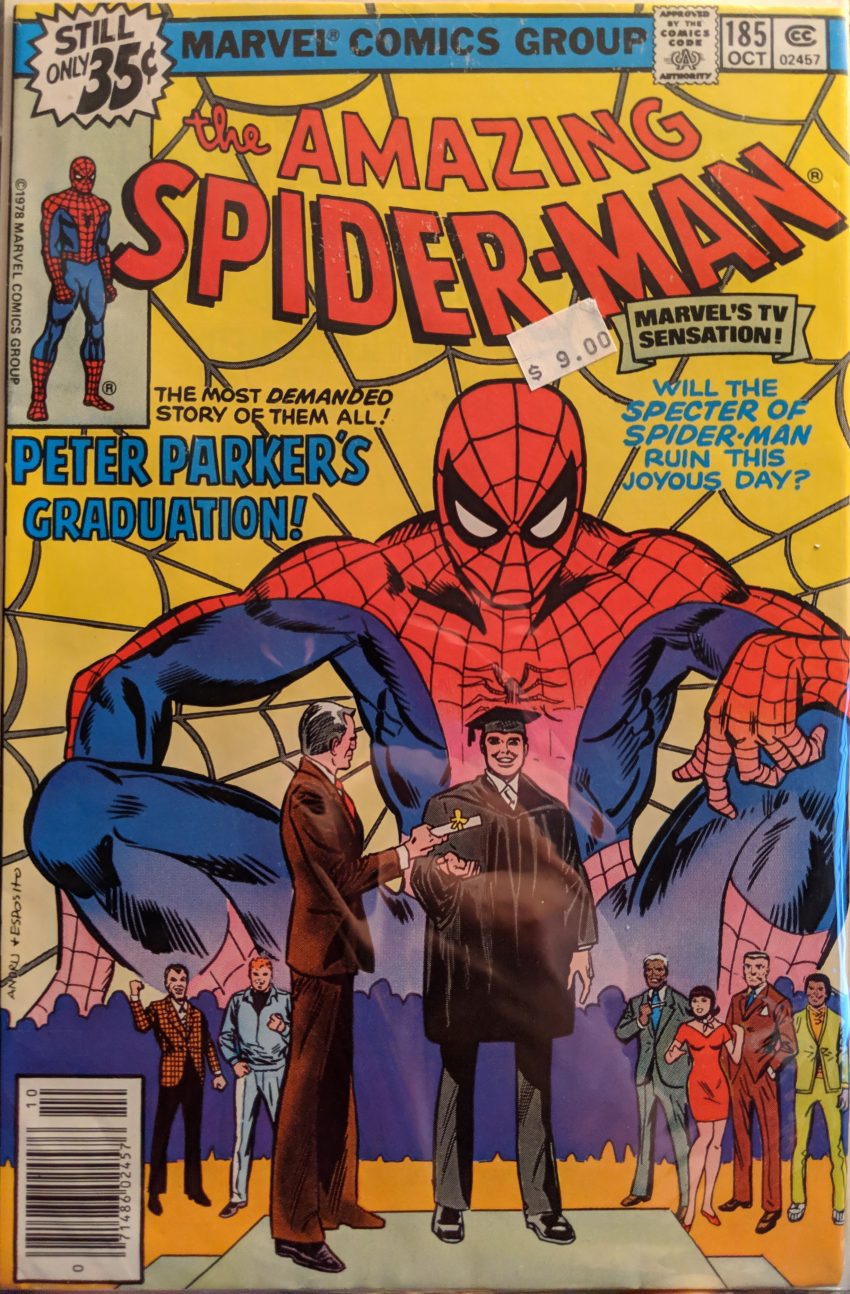 It’s the graduation of Peter Parker! Eventually. Maybe. First, we gotta get him out of this vat of burning oil. Pete has been fond of pointing out his web is flame retardant while fighting The White Dragon, so he does what anyone would do and covers his entire body in his web.

Fine. Why not? When he escapes the trap alive, White Dragon panics and everyone runs away, leaving Phil Chang tied to a chair. Spidey swings back after putting himself out in the river and Chang explains that he used to be into some bad stuff…

White Dragon found out about his past and tried to force him to join a gang. At that moment, White Dragon is off monologuing at his goons about how they used to be 4 gangs, but now they’re 1 gang by way of his actions. Look at this goofball:

Who could possibly take him seriously? He looks like one of the big Muppets that a whole person fits inside. Whatever, Spidey swings around until he finds White Dragon leading his gang to… something… like, he’s taken the whole crew out to wander down alleyways tonight. Spidey taunts them….

This man has the audacity to call someone else a “costumed dolt.” Spidey webs all the goons in separate alleys (convenient!), and then beats the crap out of White Dragon. Like it’s nothing. And that’s the point, he’s trying to show the goons not to mess with costumes crooks. But if it’s so easy now, why did White Dragon stunt on Spidey last issue? Who knows?

You can really count on Ross Andru for the most awkward action scenes. White Dragon finds himself stuck in a web, and thus that story can end and a second story can begin with Robbie Robertson rolling a TV into Aunt May’s hospital room. Joe Robertson continues to be a kind of father figure for Peter, so he’s here to let Aunt May watch Empire State University’s Graduation ceremony on TV. Just one problem: No one on staff seems to think Peter is graduating.

He takes his “spare” cap and gown and sits in a “spare” seat among the graduates (This is a thing?). The commencement speaker is J. Jonah Jameson, of course, just talking about how great he is. Then the graduation begins.

Wah wah wah. I guess maybe this is writer Marv Wolfman trying to psych you up to think his stories will be bold and new.

This issue also marks the end of Ross Andru’s tenure as penciler. Not my favorite, him. His run seems well respected, but I always thought his art looked much more natural on his DC comics. But, also, who could follow John Romita, really? Andru was just fine, but always kind of in Romita’s shadow. Never really made Spidey or any of the characters his own. Spider-Man didn’t have another truly dynamite penciler until… John Romita, Jr., naturally. But that’s dozens of issues away. Who will draw ol’ Webhead now? We’ll find out soon enough.