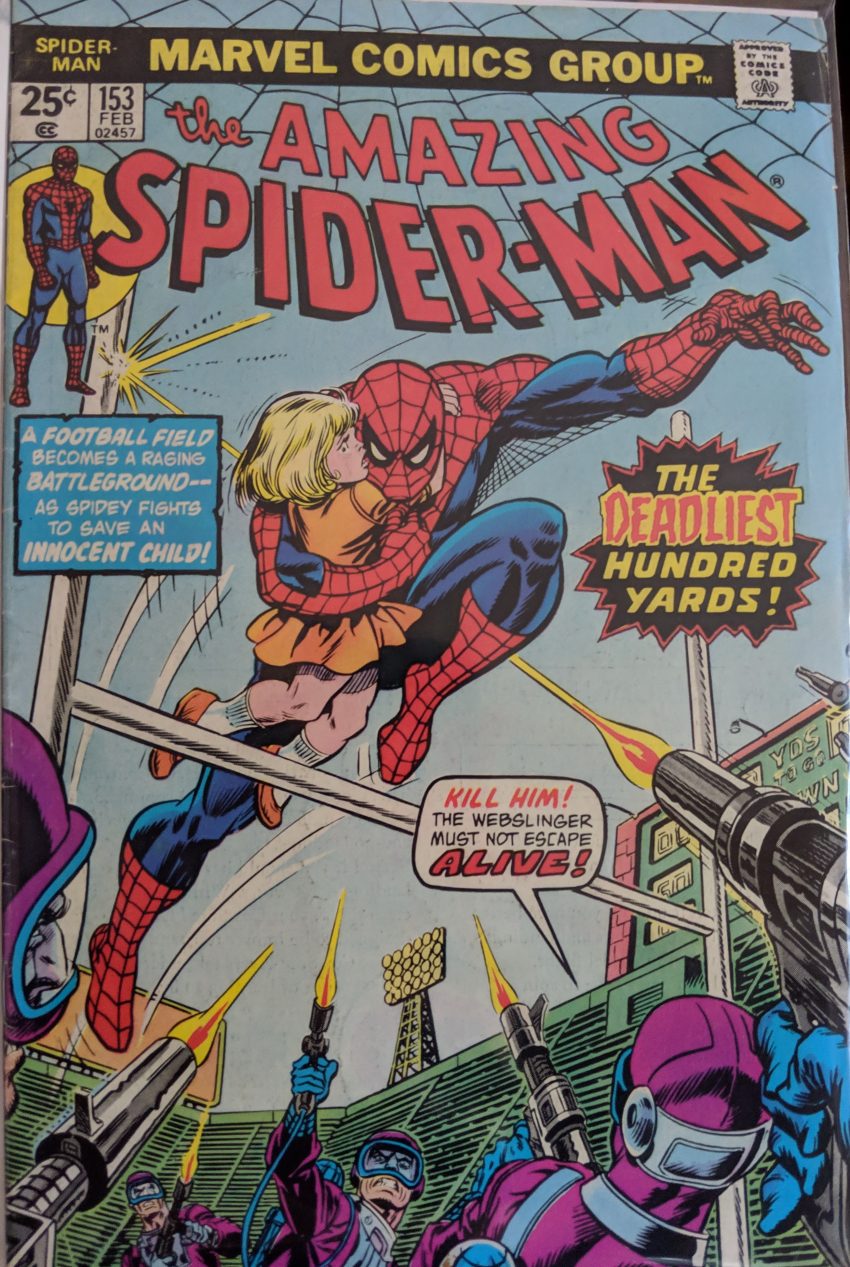 Weird arm cradling that kid on the cover, Mr. Romita. Kinda looks broken. Now we’re in the Len Wein era of Amazing. This is actually really vexing me. This is his 3rd issue, but his first issue directly wrapped up the end of Conway’s and also began a 2-part story. In addition, it’s not long before he’s picking up other threads from Conway’s run, which I haven’t gotten to post about yet, presenting me with an awkward situation. So I think this section is going to be very short. We’ll jump into Wein’s run already in progress and get out pretty quick. But when we revisit this era, we’ll settle in for a much longer set of issues.

So, yeah, we’ve jumped from 1973 to 1976. Wein, Ross Andru & Mike Esposito are the team now. Peter is seriously dating MJ, still in college, still working at the Bugle. And right this moment, he’s out swinging around late at night when he sees a cab out on the empty streets. Spidey thinks about how there’s been a string of taxi robberies just as he notices the cab’s roof light blinking on and off in an SOS pattern. Spidey sees two goons in the backseat, so he makes some strange choices, dropping to the street in front of the cab to make it swerve, then flipping around to make him swerve in another direction and hit a fire hydrant.

Spidey really has no idea how cars work. He leaves the cabbie’s job in shambles and heads home to a good night’s sleep. Good work, hero. The next morning, he’s gloating to himself about hearing the charges against the cab robbers on his way to school, where he finds Flash Thompson, Harry Osborn and Mary Jane getting ice cream. In the last couple issues, Peter left MJ at a party during a blackout to go be Spider-Man, and she’s been refusing to talk to him since. She’s still pretty mad as he approaches the three of them. Flash & Harry leave, and MJ continues to give Peter a hard time, saying maybe she’s realized he wasn’t worth fighting for.

Tumultuous! Right as Pete & MJ are getting along again, Daily Bugle reporter Ned Leeds shows up. He’s been sent to interview an alumni of the school who’s some kind of computer genius, and Ned confesses he knows nothing about computers, and wants Peter to come with him. They’re meeting the guy, a Dr. Bolton, on the field of the football stadium. For some reason, they make MJ watch from the stands.

This… feels like a weird direction for the story to go. Bolton proceeds to flashback to this fateful football game, spending a whole page on how he came one foot from a winning touchdown and lost the game. Why do I care about this? Then he talks about how he went into computers, met his wife working at Stark International, shows them a picture of his wife & kid. Then a dude walks up to deliver Bolton a message…

We soon learn Bolton is being blackmailed. Some unsavory types have kidnapped his daughter, and he won’t get her back until he gives them… “a computer part”… to a computer he’s been working on to catalog “all worldwide habitual offenders” with a Dr. Armstrong, which we’re told is going on in Daredevil right now. Uh. I’m not sure Len Wein knows how computers work. That threat out of the way, we skip ahead to evening, as this comic just taught me “homecoming” is called that because it used to be a time when alumni came back to a school, but that that’s not so common anymore. That makes sense. So now we’re at the homecoming dance.

Sheesh, Pete. He’s got a feeling something is up with Bolton, and so does Ned, but they can’t do anything unless he asks for help. Ned suggests Pete go back to MJ and try to smooth things over.

Nothing I can add would be funnier than what’s on the page. As they’re dancing, MJ is feeling very romantic, while Peter notices Bolton leaving and figures something’s up. Floundering for a way to follow without ending his relatonship, Peter makes eye contact with Harry Osborn, and then psychically commands Harry to come cut in to his dance with MJ, AND IT WORKS.

My goodness. Peter follows Bolton into a locker room, where he gets something out of a locker and then heads onto the football field, where some shady characters await with his daughter. He gives them the computer part, and then they command him to go back to the other end of the football field. But they refuse to return his daughter, their leader saying he’ll keep her as insurance that Bolton doesn’t go to the cops. And then Bolton snaps.

It’s an exact remake of the flashback page to the end of his college football career, only with bullets instead of opponents and his daughter as the football. It’s… really strange. Just then, Spider-Man shows up. He exposits that he’d been looking for Bolton on the other side of campus and he’s too late. He goes about taking the goons apart, and then Paine tries to make a break for it.

ASM 152’s next issue blurb said this one was going to be offbeat, and they were right. What a strange little story. I must say, it looked like Bolton just got winged a little rather than fatally shot. Ah, well. Weird, weird comic.