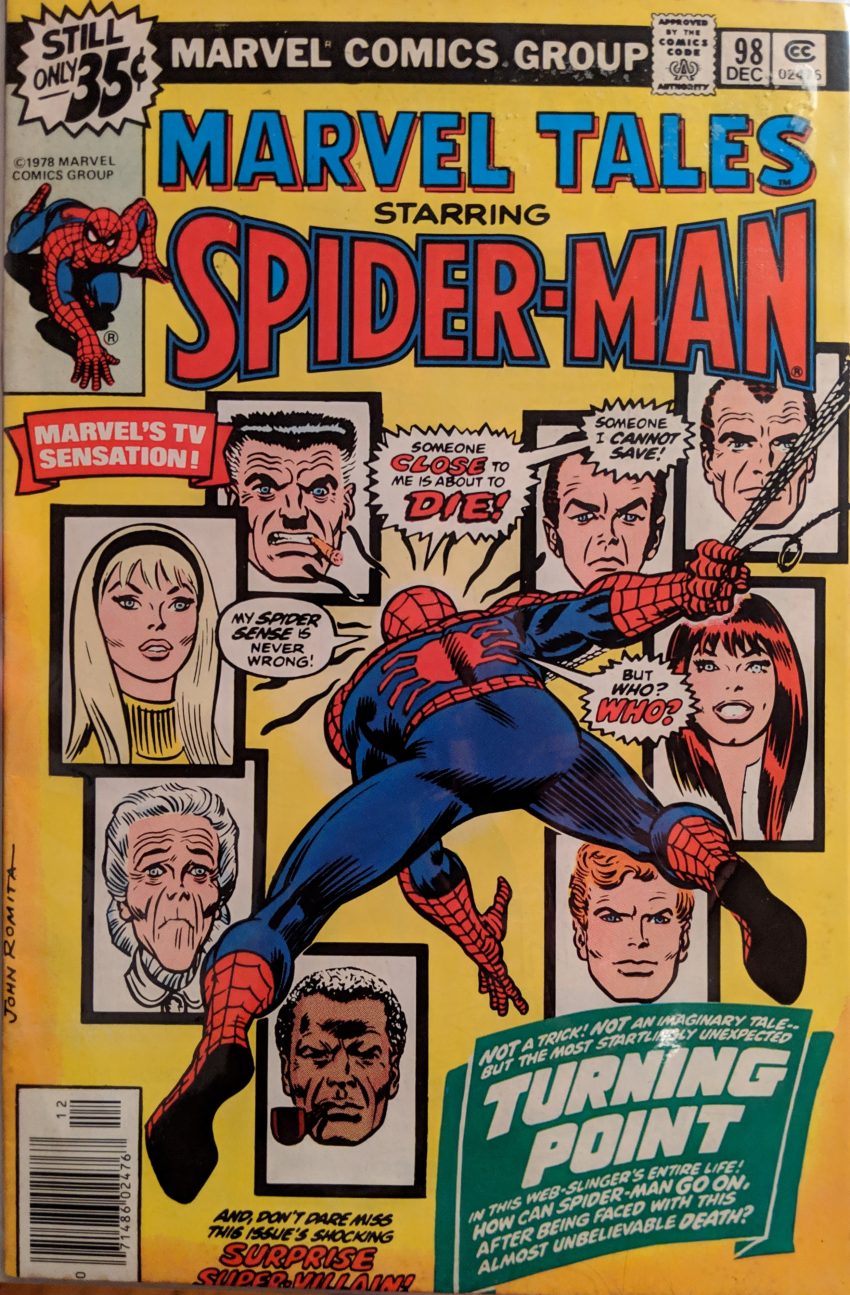 That’s a pretty crazy cover. Who could walk past that on the rack? This, obviously, isn’t an original 121, because I am not rich, but this era of Marvel Tales reproduced the original covers almost exactly, so it’s close enough. Gil Kane remains on pencils with especially heavy-handed inks by John Romita and Tony Mortellaro as they settle in for a story that rocked Spider-Man forever. As we begin, Spidey is lurking outside a window at the Osborn home, as a doctor is examining poor Harry.

In spite of continuing to deal with Harry’s drug addiction, this issue wasn’t run without approval from the Comics Code, due to a loosening of the restrictions after ASM 96-98. The doc says Harry’s trip was so bad it gave him schizophrenia. I dunno that that’s a thing, but I’m no doctor, so ok, sure. Spider-Man’s heard enough, and sneaks inside to switch to Peter Parker and, you know, participate in this moment in his friends’ life instead of just spying on it like a weirdo. But before he can, he’s accosted by an irate Norman Osborn reminding him he said to stay away from Harry.

As the gang leaves the house, MJ is taking it particularly hard, it seems. Maybe she feels bad for how she treated Harry over the last couple dozen issues. Maybe she just wasn’t expecting this kind of thing to happen to their gang. Anyway, we jump ahead a few hours to Peter heading to The Daily Bugle to drop off his Hulk pictures, and coming to the conclusion that he’s sick. Again. Sometimes it feels like this man is sick more often than he’s not. Robbie is sympathetic, but JJJ kicks him out of the office, not wanting anyone to take sick days.

Our tired hero switches back to Spider-Man to get home fast, and thinks about how he’d like to see Gwen since they’ve not been able to spend time together in days. Meanwhile, back at the Osborn house, the doctor is getting ready to leave.

Norma has a good old fashioned freak out and rushes out of the house, all the way to a nondescript warehouse where he once again becomes…

Spider-Man is still on his way there, and getting so dizzy he can barely make it. And when he finally climbs in his bedroom window he’s in for a shock.

I think it’s interesting, for historical context, that The Goblin didn’t set out to kidnap Gwen. She was just in the wrong place at the wrong time. Spidey begins frantically combing the city for The Goblin, until he finds him on top of the George Washington Bridge*.

They being to fight along the bridge, Spidey doing his best through his dizziness, the Goblin all the way off the deep end. Spidey manages to web him and wind up for a big hit…

As the Goblin falls to the water below, Spidey rushes up to where he had Gwen, but, well you know…

The Goblin helpfully counters that infamous “Snap!” sound effect by saying a fall like that would kill anyone before they hit the ground (For real tho?) and promises Spider-Man’s death will come ever more quickly.

And she’s gone. It’s hard to imagine what someone reading Spider-Man back then must’ve thought going into this. Seeing the cover, you’d probably guess Harry’s drug addiction might kill him, or maybe Aunt May would die in Doc Ock-related foul play. But Gwen? I doubt anyone saw that coming. Legend has it the response was so angry that Stan Lee told people he didn’t know they were doing this, even though he did, of course. That Gerry Conway managed to hang on to the Spidey job for another 28 issues is kind of surprising given the uproar, and a testament to Stan & Roy Thomas for backing their creatives.

This is, I guess, the earliest and maybe most infamous instance of what’s known as “fridging,” based on Gail Simone’s coining of the trope “women in refrigerators” to describe a hero’s girl getting killed as a plot device. I’m certainly not going to defend that choice. But the thing that strikes me the most, reading it in context for the first time, is Conway kept Peter & Gwen apart too much prior to this. Sure, sure, parting like that makes it even more sad or whatever, but in a way, the stakes of her death were lower than they could’ve been because these two have barely had a scene together in, what, over a year’s worth of issues? And when they have, their interactions have largely been conversations about Aunt May rather than evidence of their allegedly magical romance. The last time they did anything as a “date” was a repurposed Stan Lee comic from years prior, and even that was 5 months before this issue. Conway just didn’t give their relationship much consideration before ending it tragically. Compare this era to the run up to ASM 100. Their relationship had survived what seemed like an insurmountable difference, Peter was planning to propose and Gwen knew it… If she’d died then, man, that would’ve been twisting the knife. As infamous as this is, as shocking as Gwen’s death was, it almost seems like their relationship was sputtering out, anyway. It just feels like it could actually have had more gravitas. Maybe a weird thing to say about one of the most shocking events in superhero history, but… also feels true.

*Now, I’m no New Yorker, you could tell me any bridge was any other bridge and I would believe you, but from what I understand, in spite of the captions labeling this The George Washington Bridge, Gil & Johnny rendered The Brooklyn Bridge, which has led to some complexities over the years. Some people continued to call it the GW Bridge when referencing these events. Others started saying this happened on The Brooklyn Bridge. Does it matter? I dunno. Which would be more correct, what you’re told or what you see? I dunno. I would submit that, for the majority of the reading public who aren’t New Yorkers and wouldn’t be able to tell the difference, this happening on The GW Bridge is ironclad fact. But… I dunno. It seems worth a mention.

Here’s the original cover, though it really isn’t very different.