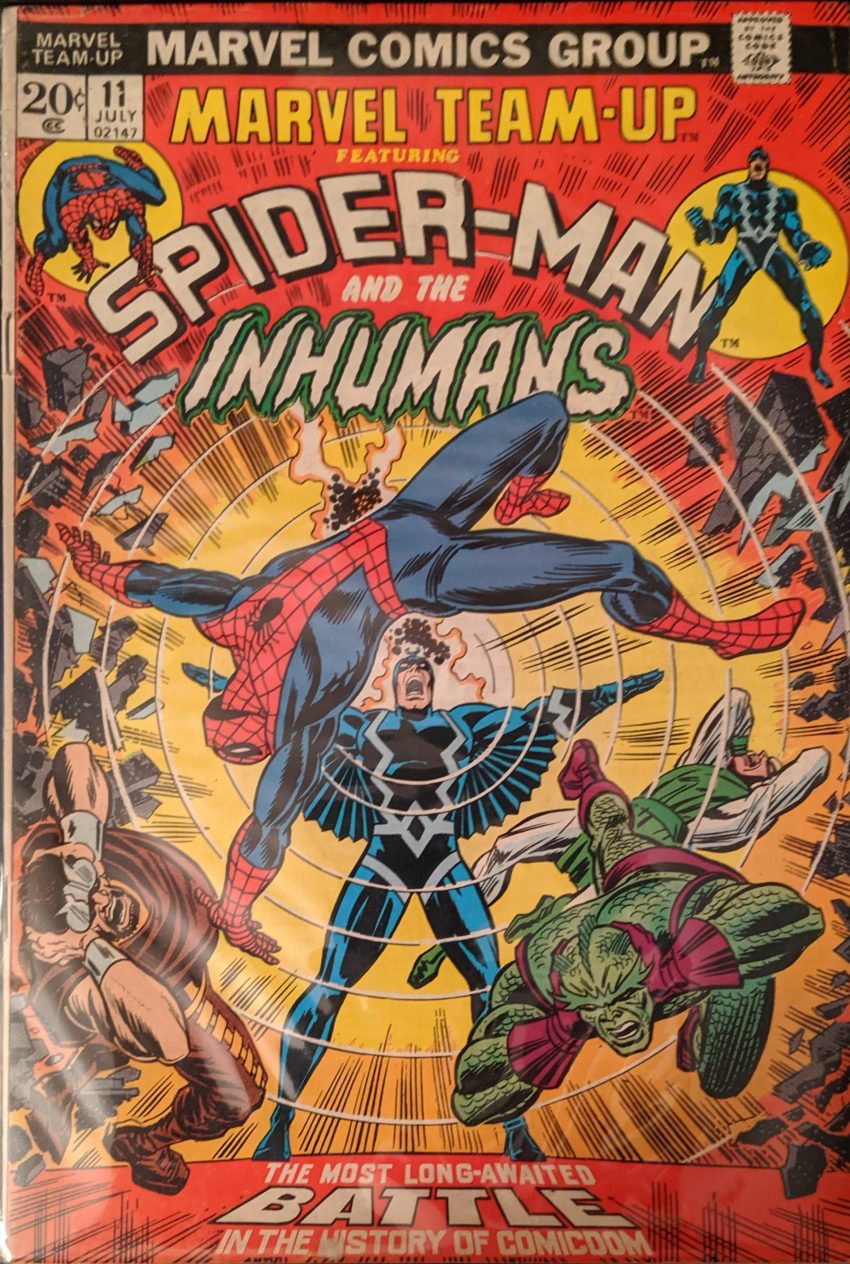 Time for the grand finale (I think?) of this time traveling caper. Mike Esposito swaps in on inks for the home stretch. As we get going, Spidey has secured a ride to The Himalayas with a “happy-go-lucky helicopter pilot,” and has just lowered himself to the ground.

Gang, if you ever freeze your fandago off, please don’t mail it to someone. That would be weird. Anyway, Spidey has located The Great Refuge, current home of The Inhumans. And some of them immediately attack him in aircraft. He’s overwhelmed by then and knocked out quickly, and wakes up at the foot of Black Bolt’s throne. Do I need to explain The Inhumans? Genetic experiments by aliens from the time of cavemen living in secret ever sense, who gain mysterious powers from The Terrigen Mists. Ruled by Black Bolt and Medusa, until the 2010s, comics only really concerned themselves with the royal family: Black Bolt, his brother Maximus The Mad, his wife Medusa, her sister Crystal, and cousins Gorgon, Karnak & Triton. Spidey recaps the last 2 issues for most of them.

While Maximus does his thing, Triton takes Spidey on a little tour of The Inhumans’ home. Then they head back and the device is ready to rock. The device sends Spidey and, for some reason, just the male members of The Inhumans to the future. What, Medusa & Crystal were busy? When they arrive, Zarrko is landing his ship outside Kang’s fortress to claim it as his own, as he did last time Spidey was here. He realizes they’ve arrived early, and hopes to use that to his advantage. But, of course, bad guys on flying machines attack at that moment.

Each of the Inhuman boys gets a chance to do his thing… Wein is really making sure you get the Inhumans’ deal in this issue… and eventually the heroes are able to breach the stronghold.

It’s pure chaos as heroes attack Kang, who has a variety of tricks to keep them off balance, but is still only one man. Eventually, Black Bolt speaks, blasting Kang across the room and shattering the prisons holding The Avengers (Remember how they were trapped here 2 whole issues ago?).

And that’s the abrupt ending of this 3-issue saga. Villains defeated, heroes rescued, day saved. It’s odd how a story this big can feel insubstantial, but I guess that is often Marvel Team-Up in general. This issue features an ad I really liked. In the late 60s and early 70s, a lot of comics had this ad: