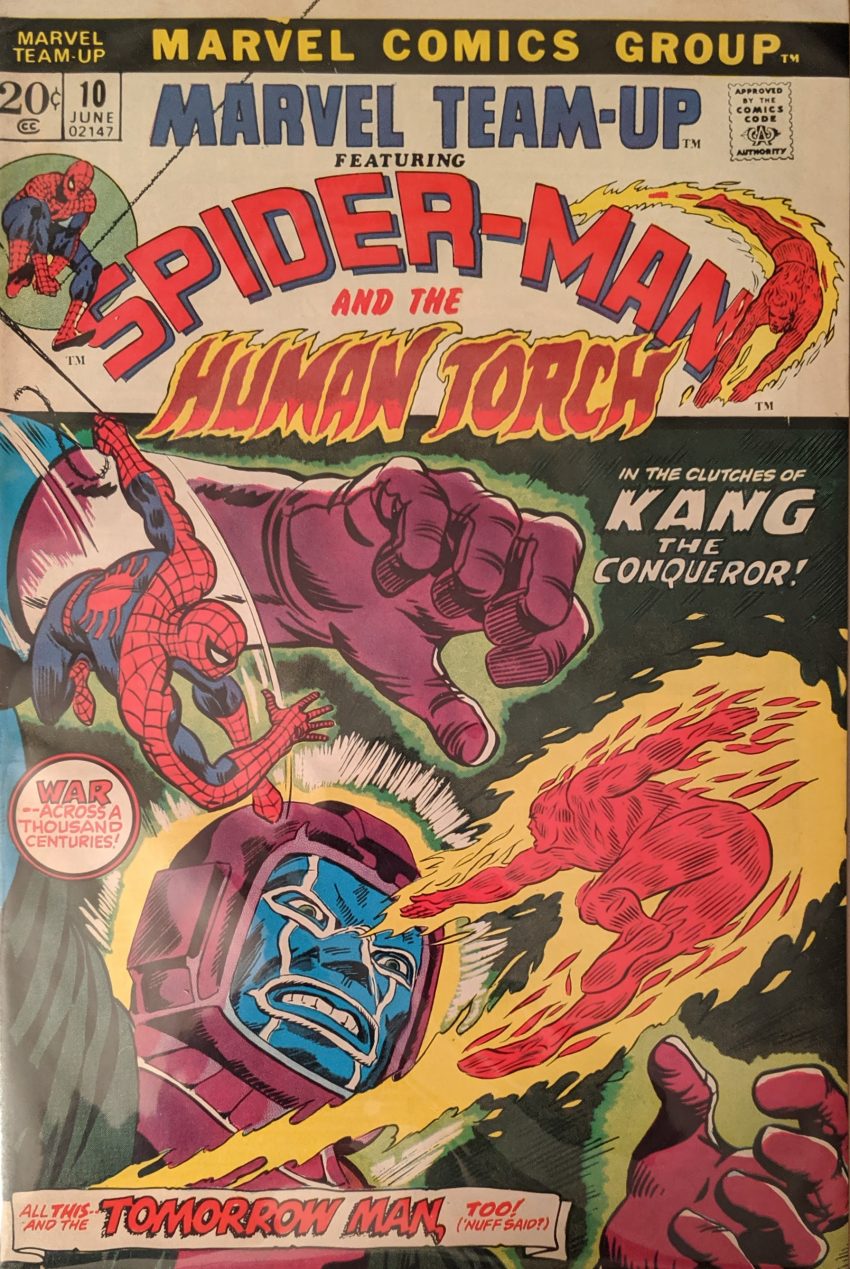 I appreciate that the “Nuff Said” has a question mark, because… probably not. So its Kang Vs. Zarrko for the fate of time itself, and since one of them is the enduring powerhouse who’s threatened The Avengers time and time again and the other is one of the weirder footnotes in Thor history, I know who I’m betting on. Jim Mooney & Frank Giacoia tag in as the art team here. As the two villains face off over the unconscious forms of Spider-Man and Iron Man, Zarrko has a ton of exposition he’d like to get out there, if it please the court.

Seriously? That’s the plan? This is like trying to kill a spider with a nuclear bomb. Why not just invade an earlier time? Which weapons depot is that mysteriously awesome in 1973? How does this jobber think he get away with talking all this trash at a dude who’s already conquered his entire planet in the times both men come from? At any rate, while he’s babbling, Spidey creeps away. Soon, he’s found Kang’s own travel machine apparatus, and finds it already locked onto the day he left, February 14, 1973 (Valentine’s Day! This story is so romantic!). He takes some time to figure out the controls and then disappears into time.

My favorite Avengers villain so casually stunting on this Z-Grade pretender is pretty enjoyable. But we’re told we have to wait ‘til next issue to see who’s scared Kang so much. That’s weird. Back in the present, Spidey finds he’s in The Baxter Building. No one talks about it, but Kang’s time travel rig looked a lot like Dr. Doom’s time platform to me, and I believe The FF would’ve commandeered that by this point. Could be the same thing. To Spidey’s chagrin, Johnny is the only one home. After some explanations, the heroes split up to go stop Zarrko’s “time bombs.” Johnny plans to go to Japan, while Spidey says he’ll take the one in South America. I sure can’t wait to see how he gets there, but we follow The Torch first. As he arrives in Japan, the bomb has already started working, with whole cities reverting to past states as he watches from the sky. He uses his flame control to create “an infra-red heat screen” so he can track the radiation to the source (Really?).

This is all pretty ridiculous. Johnny defeats the samurai even though he’s brought his fists to a sword fight, but the radiation from the bomb begins to affect him, too, and he can’t shut it off. Meanwhile, in Venezuela, as a landing plane lowers its wheels, Spider-Man pops out, too. And just in time.

Spidey reaches his bomb, but just like The Torch, it overwhelms him. Until it bursts into flame. The Torch has arrived, saying he finally got it together long enough to hit his with a fire burst, and knew he’d have to come save Spidey, too. So he did. Johnny says he feels like he’s experienced this radiation before, but can’t remember. As the surroundings change back to normal, the two heroes jump in a jet and head for the last bomb in Greece. But as they get close, the radiation turns their plane into one of Da Vinci’s flying machine concepts (???) and they fall to Earth just in time to be attacked by a bunch of ancient Greek warriors. But when they finally reach the devices, Spidey webs it before Torch can do his thing.

REALLY, Johnny? The fate of the world in several different time periods is at stake, but you’d just be way too sad to go see Crystal? That’s real heroic, buddy. I hope you left Spider-Man that jet. I guess we’ll find out next issue.