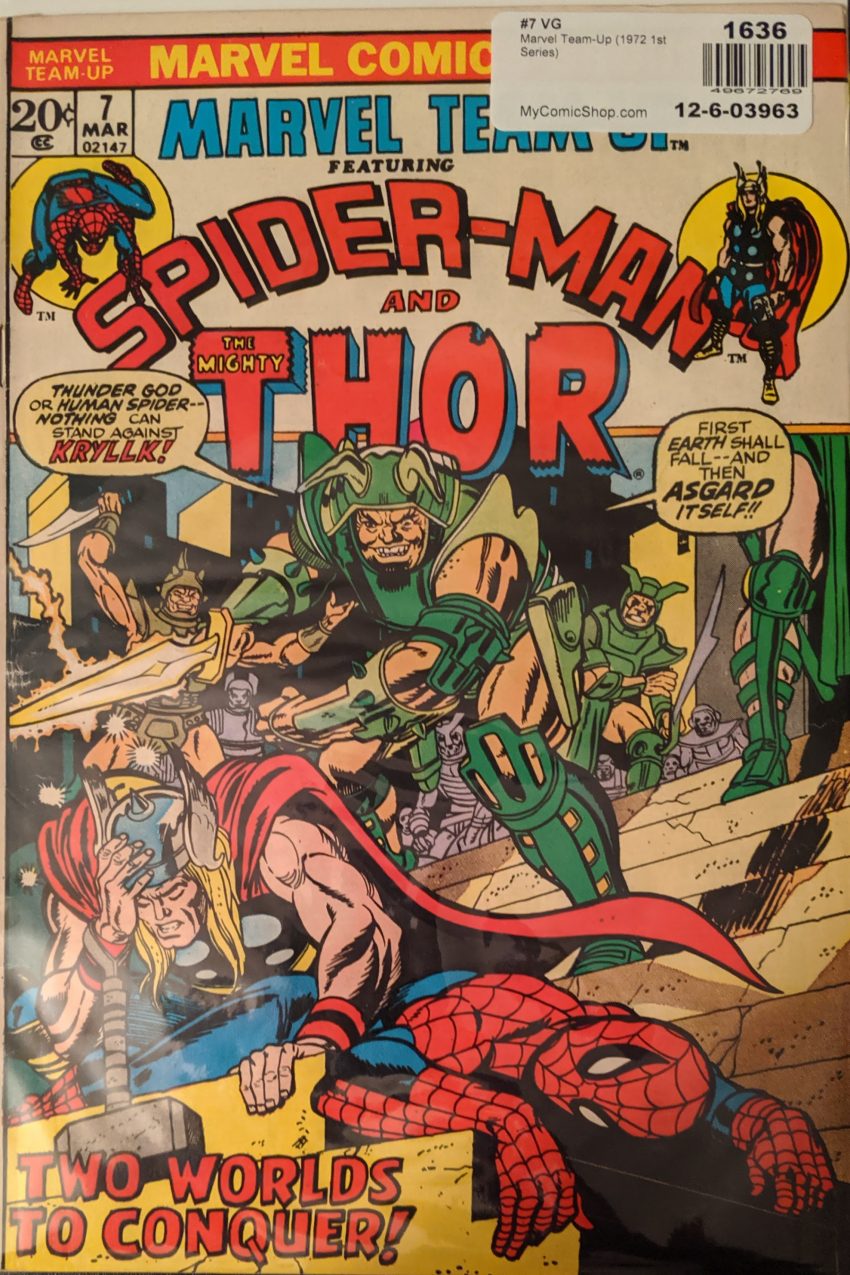 Can some guy I’ve never heard of really punk out Spidey and Thor? Let’s find out. It’s Gerry Conway, Ross Andru and Jim Mooney at the helm this time as Peter Parker’s walking past an alley at night when he hears a girl scream. Slipping out of his shoes, he dives into a couple of muggers without taking the time to suit up.

The one-two punch of that lady’s crazy hair and Thor’s bizarre introduction make this quite a page. Thor and Peter continue their weird conversation until strange lights in the sky prompt Thor to wrap them up in a vortex created by his hammer for safety. When they come out, the world has somehow gone negative. The sky is white, the stars are black. The world around them is a negative image of the norm. And speaking of the norm, this sure isn’t it:

As the heroes battle the goons, we learn these guys are Rock Trolls, and Kryllk the Cruel is their leader. He’s an old foe of Thor’s who happens to be made up for this comic. Kryllk says he’s really after Asgard, that Earth is just a stepping stone to his greater goal, and this is how he’s doing it:

(Not that Dark Crystal) Thor says Kryllk and his boys tried to invade Asgard once before, but Odin stopped them. The heroes go to Avengers Mansion for back-up, but The Avengers are frozen negative images like everyone else. Even their equipment is backwards, but Spidey is ale to rewire their computer to get it working again (Hey, why not?). They use it to trace the energy signature of The Dark Crystal, to and through Asgard. It’s Thursday, so Thor is currently banished from Asgard (Happens all the time, it’ll blow over, don’t worry), and suggests Spidey check out his home while he goes to the end of the energy trail. So, using his hammer, he sends Spidey to his destination before teleporting out himself. But Asgard turns out to be stuck in reverse like Earth.

Kryllk and his gang are down there, of course. Thor finds Kryllk protected by an energy field from the crystal, and his fo explains it gave him secret knowledge of how the universe works, which he’s using on this weird caper to destroy Asgard.

Kryllk and the Dark Crystal are somehow in 2 places at once. Spidey starts taunting Kryllk to no effect, so he just trying to sock him one, but not only does he punch right through the unmoving troll, the Kryllk taunting Thor “a million miles away” feels the hit. Thor makes to capitalize on it, but Kryllk seems to disappear.

Aaaalright. That sure was an odd one. I can’t get over Peter just being like, “Fine, I’m Spider-Man, let’s get on