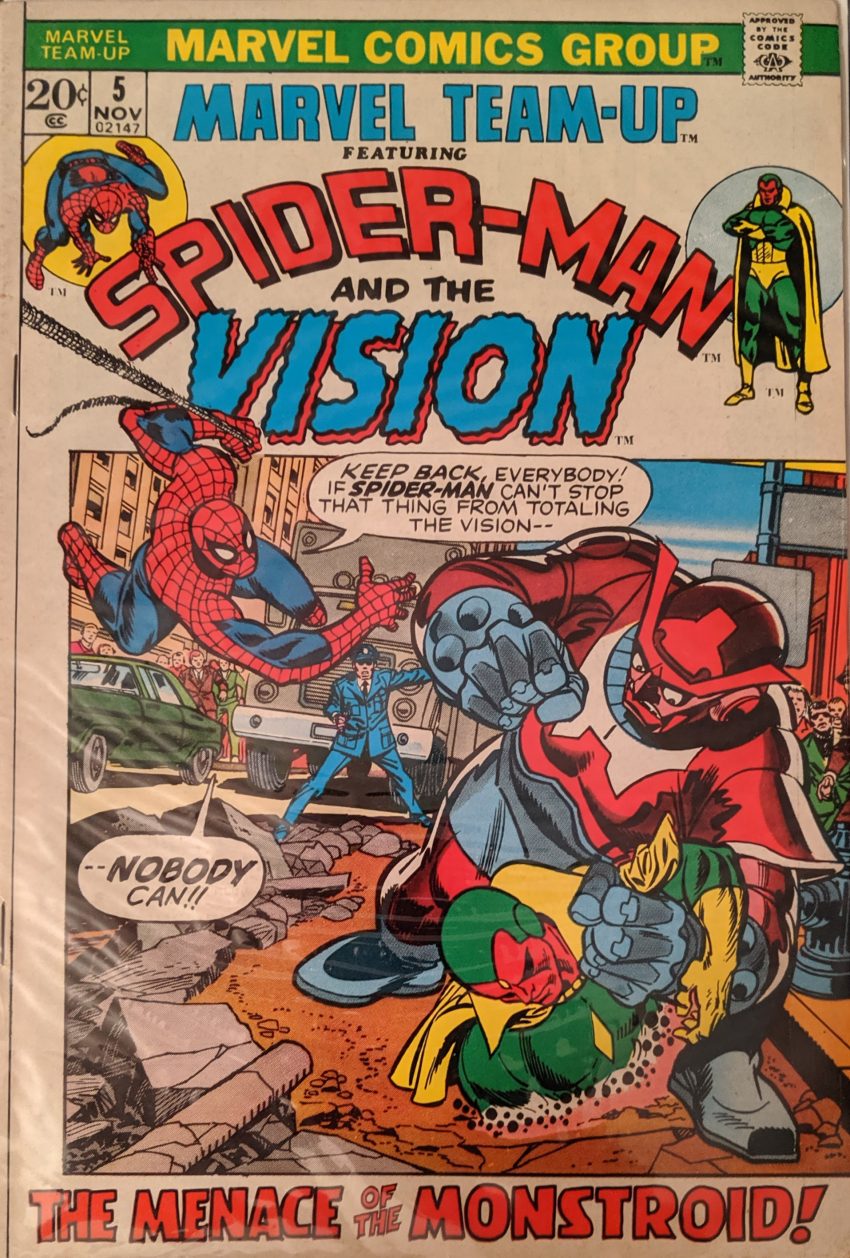 Gerry Conway still writes, Gil Kane still draws and Mike Esposito hangs on to ink as we return to Team-Up. We open on Spider-Man swinging around when he spots a guy staggering down the street. He stops to try to help the guy, only to see him sink into the sidewalk. As he pops back up, Spidey recognizes The Vision.

You can’t be too careful, but you could try harder than this. “Now that I have the unconscious Avengers in my home, better make sure the ol’ roommate’s asleep!” Vision says he’s been having seizures, and they’re coming faster and faster, and also spells out his density control powers just in case before passing out again. And from there, we go to see… The Puppet Master. What? A Fantastic Four villain who makes puppets out of “radioactive clay” that let him control people. And he’s working on one of this weird alien robot standing in his lab as he flashes back to weeks ago, when a whole spaceship crashed into the ocean next to his house. He checked the wreckage and found a big robot.

Love the action on that guard in the bottom left. Monstroid! Not really the kind of name a good guy would come up with, ya know? PM pops into the jewelry store behind his new best friend, gathering up the loot. When the cops show, as soon as they’re out of their care, he has Ballox (He goes back and forth on the name) just pick it up and chuck it into a building. The cops shoot at the robot, accomplishing nothing, and then we cut back to the heroes.

Awfully close! The heroes are off to break into a hospital, where Spidey rigs up an electro-encephalogram to scan a computer instead of a person. Neat trick!

Uh, the situation is not clear for me. So, what, Puppet Master’s robot control works on all robots? That seems a bit much. Ballox gets PM past the FF’s defenses, but they’re not home for him to try his luck against, so he decides to get ready for their return. Meanwhile, Spider-Man’s tracked the signal producing the 2nd set of brainwave patterns in Vise to The Baxter Building, so guess what?

Vision goes intangible just in time, so Ballox turns his attention to Spidey, and it’s fightin’ time. Spidey tries the old eye web trick, but the robot just burns through it. As he flips around fighting, he still hasn’t seen Puppet Master, and thus wonders why Reed Richards has sent this killing machine after him. While they fight, Vision accidentally sinks through the floor until he’s in the room with Puppet Master. We cut back and forth between Spider-Man fighting the robot and The Vision trying to fight through his pain to stop the real villain. He finally manages to phase through Puppet Master, relieving him of his robot control and messing him up pretty good in the process.

Poor Spidey winds up left in the dark at the end of a lot of his team-ups, as it turns out. At least he saved Vis, though. All’s well that ends well. But… has it really ended?