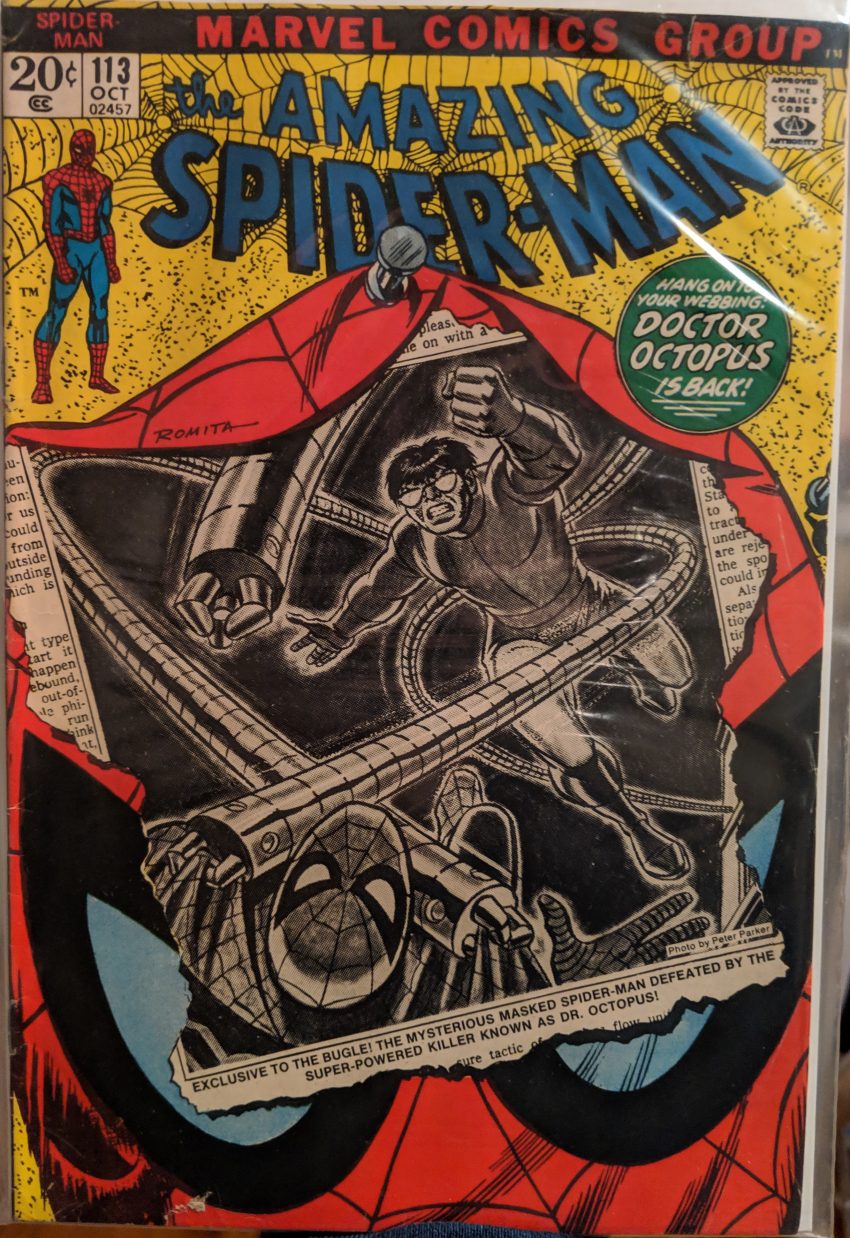 Just about a year after his last appearance, Doc Ock is back. Jazzy Johnny continues to get top billing as Ock gets down to the business of beating up Spider-Man.

BOK-O! As he usually does, Ock’s got Spidey on the ropes from jump. Spidey’s villains can sometimes seem a little ridiculous or ineffectual (Especially in the 70s), but Doc Ock is always ruthlessly focused on killing Spider-Man. He always seems more dangerous than most of them. In the heat of their battle, Ock manages to get Spider-Man’s mask off.

“Only the most monstrous of idiots” is a phrase that deserves to be added to your repertoire. Our now maskless hero has made good his escape, but he’s looking rough. He was in bad shape already from not having slept in days before Ock beat him up. He can barely keep it together.

There’s why MTU 3 & 4 had to happen before this, even though I don’t see how they could have. A frustrated Doc Ock gives up on Spider-Man to make sure his plans stay on schedule, dropping his mask on the way. And it’s picked up off the street by Randy Robertson, of all people, on the way to his folks’ house for dinner, where he presents the mask to his dad. That’ll go over well at work. Up on a roof somewhere, Peter Parker is feeling too sick to even move, while elsewhere, Doc Ock is overseeing his schemes more personally now.

Mr. H! Who could that be? This guy, saying there’s not room for him and Doc Ock in this town:

Unfortunately for Mr. H, Doc Ock has guessed this is a trap, and come smashing through the wall of his nightclub ready for battle, taking out several goons with no effort.

Ock’s looking pretty svelte these days. What’s your secret, Otto? Meanwhile, Peter Parker has changed back to his regular clothes and managed to stumble back into his apartment before passing out. He has nightmares about Aunt May, and Doc Ock, and Doc Ock hurting Aunt May, until…

Peter sure does get sick and have nightmares… a lot. Pete barely manages to hide his Spidey suit as Dr. Bromwell looks him over.

I guess that makes sense. Who worries more than Peter Parker? Ulcer or not, Peter still has a job to try to keep, so he brings his photos down to The Bugle, where JJJ has Spider-Man’s mask pinned up on the wall like a trophy. This isn’t gonna help Peter’s ulcer. He’d hoped to go find it somewhere. As he’s worrying over this, Bugle Reporter and Betty Brant’s current love interest Ned Leeds stops him. He wants Pete to know he’s been looking into Aunt May’s disappearance, and has a lead at a “domestic employment agency.”

The maskless Spider-Man swings by a costume shop, where he steals a Spider-Man mask. It’s pretty good, but the whites of the eyes are missing, so you can see his eyes through the mask. It looks weird, but it’ll have to do. And now Spider-Man really is the criminal JJJ paints him as, having officially stolen something. As he heads to the address Ned gave him, he notes it’s near where he got into it with Doc Ock, and worries that might not be a coincidence. And then, naturally:

Spider-Man darts away from battle, and retrieves that power suit he pulled off one of Ock’s goons last issue. That plus his own considerable strength give him a bit of an edge against Doc Ock for a change.

And thus we meet Hammerhead, who will become a fixture in Spidey comics. Roy Thomas introduced the first lasting addition to Spidey’s rogues gallery that didn’t have Stan Lee’s name attached in his first issue, and now Conway has points on the board. Morbius is allegedly getting a movie and Hammerhead is in that beloved Spider-Man game. Not many people can make lasting contributions to a characters like Spider-Man. It’s noteworthy when it happens.