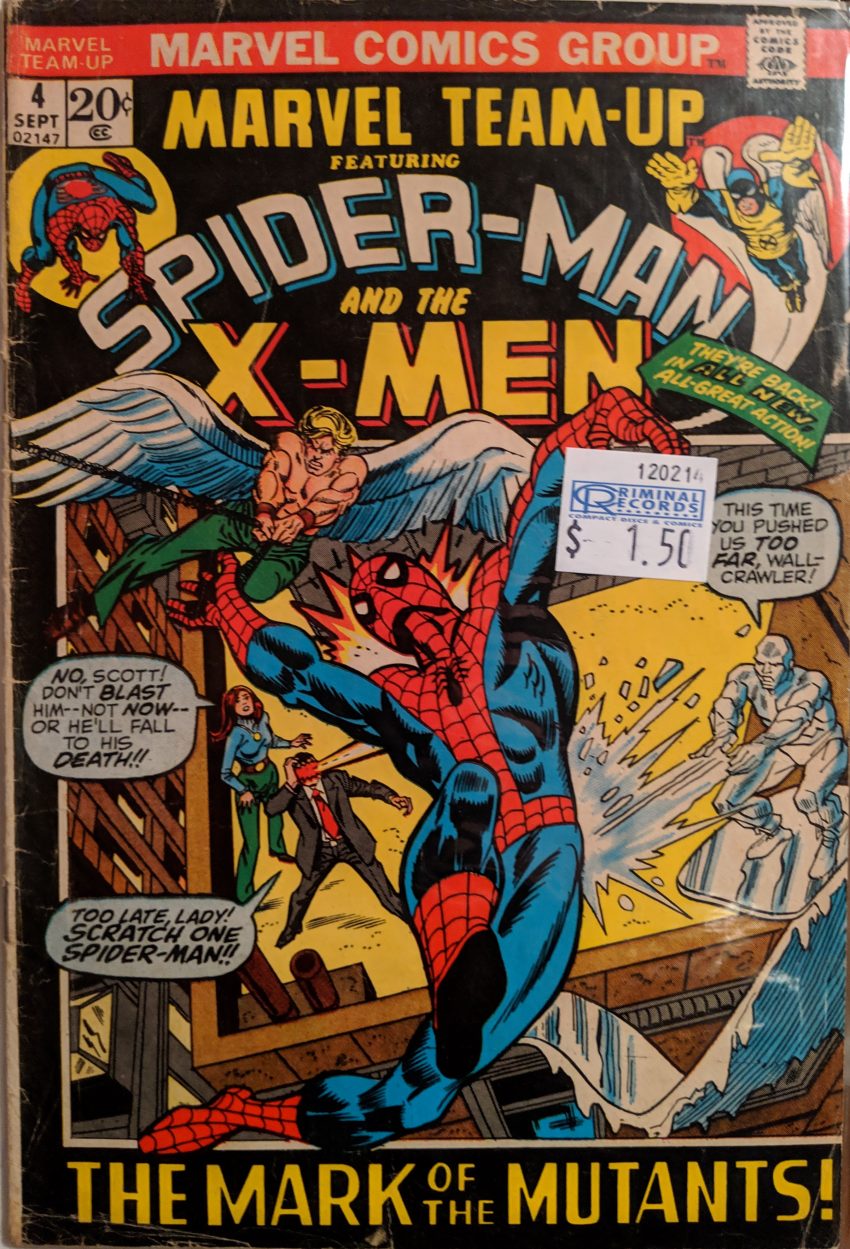 I first saw this story in 1990’s Marvel Tales #234, behind a then-cutting edge Todd McFarlane cover. This was my first exposure to Gil Kane’s art, and even as a brand-new comics nerd in elementary school, I could tell Kane’s stuff was a lot more exaggerated and dynamic than what I was used to seeing in old comics. This is one of those where getting a copy of the original after reading a reprint over and over as a kid was a trip.

As this one, by Gerry Conway, Gil Kane & Steve Mitchell gets rolling, Peter Parker is having a nightmare about Morbius. Harry Osborn comes into his room and wakes him up because he’s screaming in his sleep. Harry says he needs a doctor, but Peter just pushes him out of the room and says he just needs some rest.

Well, if you don’t want Harry to know you’re Spider-Man, maybe don’t yell it two seconds after he’s left then, genius, sheesh. 70s comics had way too many people finishing their sentences in a weird and unnecessary yell. Is this just how people talked back then? “I would like a big Mac, please — WITH A COKE!” As you can see, our man’s suiting up as Spidey to head out into the night, noting he’s been sick for a week now. A WEEK now! How on Earth can this be happening next to the plot in ASM? And by the same writer, no less. Spidey has begun to suspect his illness is tied to Morbius somehow, so he heads off to see Professor Jorgenson from last issue, hoping he can help. Say, what’s he been up to? Well, right now, he’s reviewing some letters from Morbius, wherein he seemed to be on the way to developing an enzyme that could reverse certain kinds of leukemia.

Morbius will finish any sentence you give him. Morbius kidnaps his old buddy with the aim of becoming human again. Shortly, Spider-Man arrives on the scene, but unfortunately for him, Jorgenson’s landlady is fed up with all the bumping around up in the professor’s place and heads up there to give him what for just in time to faint at the sight of Spider-Man. Spidey had just discovered Jorgenson’s notes from Morbius, so he just takes off with them before the old lady can wake up and call the cops. Naturally, the next day’s Daily Bugle claims “Spider-Man Kidnaps Noted Scientist.” And one reader of that paper happens to be Professor Charles Xavier, who improbably also knows Hans Jorgenson, like everyone else in the Marvel Universe!

Xavier telepathically rounds up all his X-Men… Iceman, Angel, Cyclops & Marvel Girl (except The Beast, who’s busy turning himself into a literal beast in a comic called Astonishing Tales right now and can’t come to the psychic phone) to send them out to find his missing friend. And so, seven hours later, Spider-Man’s swinging around complaining that he’s still dizzy when the X-Men attack! Curiously, not in their uniforms. Angel breaks Spider-Man’s webline and flies off with it, prompting Spidey to switch directions, but…

After all the fellas fail to capture Spidey, Jean Grey’s finally had enough.

(Pretty egregious mistake on the webbing pattern there) They take the unconscious webslinger back to Professor X, and once he reviews the notes Spidey I guess had on him, he deduces Spider-Man only has four hours to live! He reads Spider-Man’s mind, dredging up his memories of his previous conflicts with Morbius, and realizes they were after the wrong dude. So he sends his X-Men out looking for Morbius, intuiting that the vampire must have Jorgenson. And he does, but Jorgenson is still unconscious, so Morbius heads out to find some delicious blood somewhere. Morbius ends up feasting on a couple of would-be muggers, and their screams drift up into the night to The Angel, patrolling the city for signs of the vampire. Kane’s rendition of Morbius has gotten a bit more intense since last time…

The X-Men are so freaked out by him that he’s able to just lunge right into them, sending them sprawling all over the place, in a sequence that could only happen in a comic book. Morbius does a remarkable job of fighting all four X-Men all by himself for a guy who’s not technically even a supervillain, until he winds up holding Jean hostage.

Zap! Feel like Jean could’ve just, you know, pushed Morbius away with her telekinesis, but at least Cyclops made it look cool. In short order, because there’s only 2 pages left, Professor X uses Jean as a conduit to probe Morbius’ mind, allowing the X-Men to locate Jorgenson and then bring everybody back to The X-Mansion, allowing Jorgenson to fix Spider-Man just in time. Spidey wakes up and wonders if he’s dead.

Even as a child, I remember thinking, “Can Spider-Man just do that?” Creepy move, Pete! So Spider-Man leaps off into the night, and the X-Men are left in possession of a murderous vampire and an out-of-place scientist. You might think that’s a good setup for their own title, but unfortunately, the X-Men were in a weird, weird place when this came out in 1972. At their lowest popularity ever, in fact. Their comic was about halfway through almost 6 years of reprints, just re-running old issues every month. So this new adventure was pretty rare for whatever fans they may have had at the time. It would be 3 more years before the “All-New, All-Different” team debuted and changed the game for The X-Men forever.