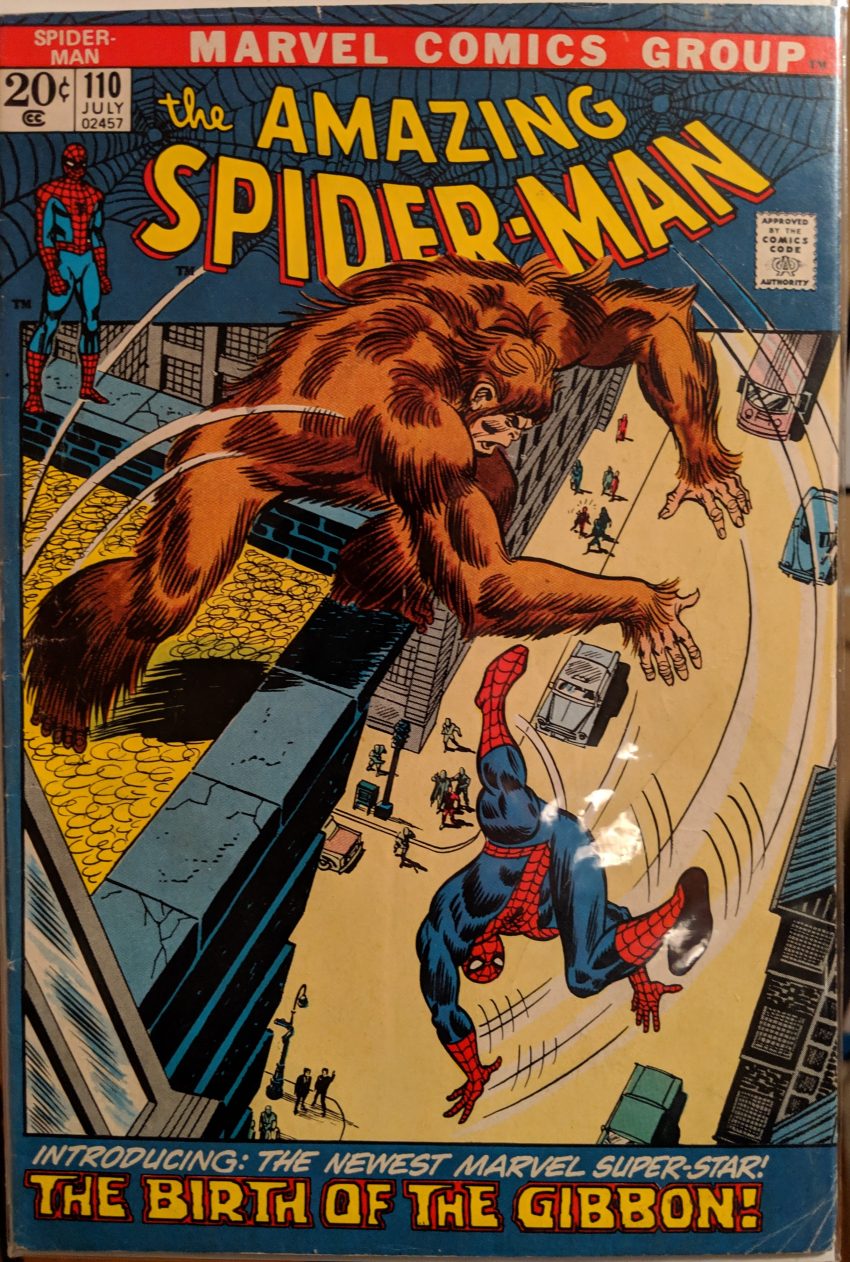 Buckle up for the saddest supervillain origin I have ever seen, gang! Woof. We get rolling with Spider-Man standing on a rooftop, beating himself up over the fact that Flash and Gwen could maybe have a thing. Then he realizes he didn’t take any pictures during that whole ordeal and gets even more upset, and eventually throws a fit about it:

Of course, he immediately realizes he’s customized that camera over the last few months and can’t replace it, and also it could be, you know, traced back to him, so he tries to retrieve it with a web, but misses. Lucky for him, someone catches it.

(Some cool inking in panel 2 up there) Spidey takes issue with the guy calling himself a freak, and tries to cheer him up, but he’s not having it. Blank heads back to the flop house he’s living in and begins telling us his tale of woe. How he grew up in an orphanage, and has looked kinda like a monkey his whole life. The kids always teased him for it, and he was the only kid in the orphanage who didn’t get adopted. That’s why he’s called “Martin Blank.” He just left his last name blank when he grew out of the system and left. I mean, jeez. This is surprisingly grim stuff. He couldn’t hack it with regular people, so he went to a circus. He tried to get a job as an acrobat, but they saw how weird he looked and just gave him a fur suit to make him look like a monkey man.

After meeting Spider-Man, he says he suddenly knows what he should do. Speaking of whom, Spidey’s swung back to retrieve his clothes off the dummy he made last issue. He’s beat up and exhausted, and realizes he hasn’t actually slept in days. So he walks into the apartment, where Gwen & Aunt May are still waiting for him, not looking too hot.

Gwen feels bad for making Aunt May feel bad, and Peter already felt bad, so it’s a happy reunion. Then Peter does what he tends to do these days and passes out. Gwen calls to Aunt May to help with him, but she’s left. Ouch. Then Harry & Flash walk in. Flash starts making a joke about Peter, but Gwen won’t hear it. She pours out her heart about how much she loves Peter, but he’s still out, so he doesn’t hear her. The fellas do, though, and are sobered by her speech. Harry suggests Flash take Gwen home while he looks after Peter. Flash says Pete’s a lucky guy to have someone like Gwen.

Peter’s nightmare involves losing Gwen and Aunt May and not being able to do anything about it, and then he finally jolts awake.

Pete remembers hearing that Aunt May left with hurt feelings and tries to call her, but there’s no answer, and he panics a little. He misses a note left for him and he charges out to change into Spider-Man. But as he swings off toward Aunt May’s apartment, Marty finds him, wearing his monkey suit. Spidey says, “A talking gibbon!” and there you have it. The newly-minted Gibbon says he’s got a deal to make with Spidey:

Spider-Man was so kind and tried to help last time they saw each other, but in his defense, this dude did just roll up to him in a monkey suit. But Marty doesn’t handle it too well. He tries to make his case by grabbing Spidey by the arms, but he just pops loose, shocking Martin with his strength.

As Spidey swings off and Martin throws a tantrum (Not unlike Spider-Man’s at the top of the issue), a mysterious shadowy figure watches, and decides he can mold The Gibbon into a weapon that will kill Spider-Man. Who could this mystery man be?? The cover of next issue will ruin it immediately!

And as crazy as it seems, this is Stan Lee’s last issue of Amazing Spider-Man ever. This is a bizarre way to leave. And once again, he leaves on a cliffhanger. Next month, Gerry Conway comes aboard to begin a pretty long run on the title. And to tell us what happens with Stan’s last Spidey villain.
As mentioned on the Secret Origins! page, I’m rolling these posts out in blocks, hitting a selection of work from the eras of each major writer on ASM. And while it may not seem like it, this is the start of the 2nd block, since him finishing this 2-parter technically begins the Gerry Conway era. Purely for those playing along at home to keep track.

This issue features a 2nd letter from David Michelinie. My copy also features a small piece of paper on the back of the backing board with pertinent info about this issue:

Yes, that piece of paper says that somewhere, at some point, someone was asking $40 for this comic. Would you like to know what I paid for it? $3.34 plus shipping. Don’t ask me. When I say I stumbled on a ton of great ebay deals before starting this blog, I’m serious. I almost feel bad, reading this piece of paper. Like I cheated someone. But… well, I got it now. I’ll take good care of it.