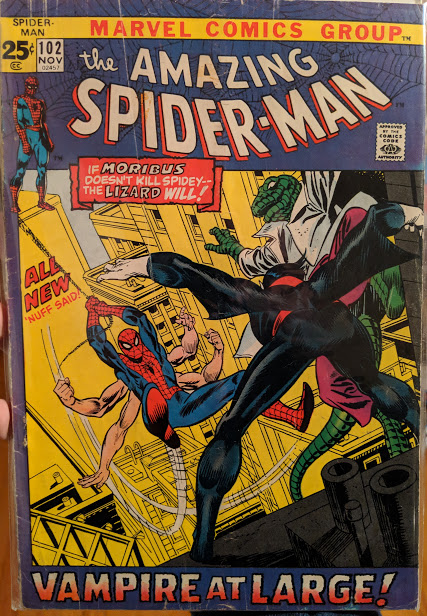 Ah, back to normal on covers. There’s a few more reprints in the future (3, in fact), but otherwise, we’re looking at the real things again for a good, long while. Unfortunately, this one’s prrrretty rough. The spine is weirdly ragged, and barely attached. The staples are actually through the book instead of in the spine, which is going to be an issue. I was kinda shocked to find the 2nd appearance of Morbius at a reasonable price, and that’s what ya get sometimes. Pages look pretty good, though.

At any rate, we pick up right where we left off last time. Morbius and The Lizard even repeat their last bits of dialogue. Then there’s a 1-page recap of how we got here, featuring Kane’s best, creepiest drawing of the six-armed Spidey so far…

…and then we get right back to The Lizard fighting Morbius over which one of them gets to kill Spider-Man.

Kane gives The Lizard big scary teeth. I think he’s the only artist to do this between now (still 1971) and 1989. The two villains keep bragging about how cool they are and slugging it out as Spider-Man, who has now scurried up the wall, looks down and wonders what he should do. He figures Morbius is trying to kill him, but The Lizard actually hates him, so there’s no real winner there. Morbius then throws Lizard into a big piece of scifi equipment which electrocutes him unconscious. And the second he’s down, Morbius is coming for his neck. So Spidey finally decides to jump in.

(The weird staple placement is gonna make my pictures even worse than usual.Sorry) Since this is proving more trouble than it’s worth, Morbius decides to just leave. Spidey tries to trick him into a supervillain monologue until he can recover his strength, but Morbius doesn’t take the bait. So, the still pretty messed up Spidey puts a tracer on his back and lets him go. Then The Lizard wakes up, but that doesn’t go the way you’d expect…

That’s new. But it only gets weird as Connors starts to turn back to normal, and stops halfway, becoming a dude with hair and pink scales.

Connors turns back into The Lizard, and while he remains friendly, he’s sounding more and more like The Lizard as the two work toward some kind of cure. The bottom panel here comes out unintentionally funny.

The Lizard is, let’s face it, kinda goofy looking. Eventually, Lizard-Curt realizes that Morbius must have put some kind of enzyme in his system that might mix with the serum they’re working on to get rid of Spidey’s extra arms and return Curt to normal. But they have to go out and find Morbius to get more of the enzyme. Man, are they gonna milk his fangs like a snake? This could get weird.

Morbius is just flying around, talking to himself in his stilted, vaguely Victorian way, I guess to make him seem more like a vampire, talking about his need for blood but not actually trying to get any. The sun’s coming up, so he breaks into a boarded up cellar to sleep, hoping not to hear the voices of his victims for a change. As he falls asleep, he remembers how he got here so we can find out, too. Weeks ago, he was just a European scientist, standing in front of a Jack Kirby-lookin’ machine with his assistant, Nikos, as they experimented with a vampire bat. Even as a regular dude, Morbius has that weird nose, facial hair, and that gaunt, withered look. They were interrupted by Morbius’ lady…

On the boat, Morbius kept Martine in the dark about the rare condition “dissolving his blood cells,” and the crazy lengths these guys were about to go to to try to fix him. They put Morbius in a spacesuit lookin’ outfit and zapped him with a process that was meant to “electronically grow blood cells.” It wasn’t pretty.

Weird explanation for his vampire suit, but why not? Morbius took a moment to rest, but he was already a vampire, he was just trying to pretend otherwise. It was only a few minutes before he lunged at his friend, strangling him to death.

He didn’t want to kill Martine, so he dove into the ocean to drown himself. But he couldn’t go through with it, and swam back up to the surface. Then that boat from last issue found him, and here we are. He’s just finished reliving his recent troubles when a homeless guy happens upon his sleeping form. That doesn’t go too well for the homeless guy. Then we look in on two random dudes at a “TV News Service” who keep getting reports of a monster on Long Island, and then we finally get back to Spidey & The Lizard, swinging around looking for Morbius. And looking super weird together.

As Spidey recaps this issue like we weren’t just there (Like, what?), The Lizard regains control of his body long enough to freak out and let go of Spidey. Spider-Man is able to web him, and I guess the shock puts Connors back in control. Connors doesn’t think he can hold on much longer, so they continue their search. Meanwhile, a certain young lady is beginning to worry that she hasn’t heard from Peter in 2 days…

Well, that’s no good. Then we cut to The Daily Bugle, where they’re also getting reports of a monster on Long Island (Why didn’t we go here in the first place instead of seeing 2 random dudes?), but JJJ doesn’t care, because he’s worried the paper is about to go under. Circulation is down, and he’s lost their biggest advertisers to TV. But, I guess we’ll sort that out some other time, because it’s back to Morbius now, flying around Manhattan, talking to himself as usual. And if there’s anyone who can relate to talking to himself in the sky above Manhattan, it’s…

Spidey tries to tell him they want to help him as much as themselves, but Morbius isn’t into that and flies away. Spidey webs him and swings him into a wall, knocking him out.

The serum fixes Curt back up, but then Morbius wakes up, kicks Spidey in the face and steals it. Curt finally recognizes Nobel Prize Winner Michael Morbius, who Spidey’s heard of, too. Spidey chases him down, musing about what he’d do if he got turned into a vampire.

Morbius plunges into the water, as Spidey falls onto a garbage scow. He shoots a web to grab the sinking Morbius, but manages to grab the enzyme out of his hand by accident, instead. Morbius sinks below the waves, gone forever, yes sir, never to appear again, and Spidey feels terrible about it.

And so the weird saga of the six-armed Spider-Man comes to an end. This was a long one. A note in the letter page mentions that, starting this month, Marvel comics have increased from 15 to 25 cents, but also increased from 36 to 52 pages. Huh. That’s almost an annual. It’s explained as a response to inflation. I have never understood this. Even today, comic companies often say they have to raise prices to stay afloat, while also putting more content in each issue, which seems like it would negate any increased revenue from the price hike. Either I don’t understand finances, or this practice doesn’t make sense. Good thing I don’t need to know, I guess. But I do know these comics aren’t going to stay 52 pages forever, so it’ll be interesting to see when they shrink again.