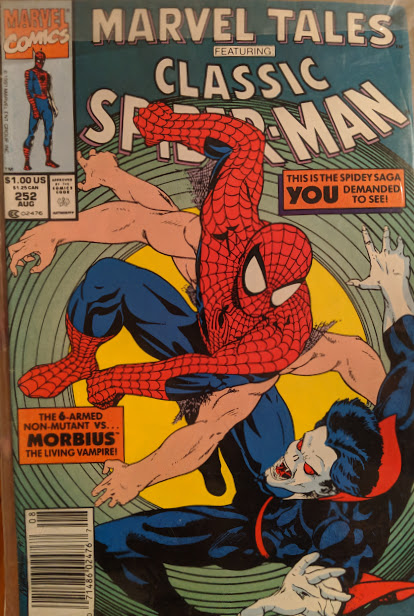 Another reprint! Yeah, well, ASM 101 is expensive. If anyone wants to buy me one, feel free. But, lucky for me, I’ve had this issue of Marvel Tales since it came out, way back in 1991, so we can keep going. That cover is by noted Batman artist Marshall Rogers, who was doing some work around the Spider-Offices in the early 90s, covers and some interiors. His art didn’t really fit into what seemed cool to young me at the time, but I have a much better appreciation for it today. If we ever get to the 90s, we’ll see his work again. But right now, it’s still 1971, and Spider-Man’s still got 4 extra arms! So, naturally, that’s when you introduce a vampire.

Roy Thomas takes over as writer (He’s billed as “stand-in scripter,” as if he expected his tenure to be short, which it was) with the same art team as usual lately. Peter Parker is still understandably freaking out. He’s having a lot of feelings.

Naturally, this is when Gwen calls to ask Pete out to a movie. He doesn’t handle that well, either.

Super smooth, Pete-o. He starts to worry that Aunt May will see what he’s done to himself and it’ll kill her, and imagines himself becoming a figure of terror in New York.

Next up on the parade of strangely timed phone calls is Joe Robertson. He wants to know if Peter can go on an assignment for the Bugle, but Pete says he’s going to the country to head off a case of mono. Better than how he dealt with Gwen, at least. Peter suddenly realizes there’s one person he can call: Curt Connors. He knows Connors has a place in Southampton, and tells him he’s been in an accident like the one that made him The Lizard, and needs a place to go. Curt says the place is all his, and there’s a lab there, and then Pete promptly hangs up on him.

I mean, you told him you’d been in an accident similar to his… that might paint a worse picture than what you’ve actually done to yourself, but what do I know? Anyway, Spidey swings off into the night, and almost immediately falls off his webline when one of his crazy arms knocks him loose. He slowly begins to gain control over his extra arms as he makes his way to hop a train to his destination. As he approaches the place, Spidey says he wonder why Connors does all his research in Florida…

Spider-Man can’t shake a bad feeling, and his Spider Sense is going off. But it’s not the house, it’s a boat right off the coast, where things are getting weird. They took in a guy found adrift in the ocean, and since then, crew members have been disappearing, and now they’ve found their captain dead.

Morbius manages to escape the crew and avoid them all day. He doesn’t have much strength during the day. But when night falls, it’s a whole other story…

I’ve said it before, but I really love a Gil Kane montage panel. Morbius has now killed everyone left on board. He’s horrified by his own actions, but can’t stop himself. So he dives overboard and swims to the beach, where he finds Connors’ house. This is weird, since he can fly, and soon does. As the sun rises, Morbius sneaks into the house and lays down to sleep in the belfry (har har). Later,  Spider-Man is having no luck coming up with a cure for his arms. I mean, how would you? He trying to make “arms-go-away” spray? He tries to mix up a new potion, but it fails, and he’s pretty dejected. But it’s sunset now, so he’s about to get busy as a certain figure comes down the stairs, unseen.

I love the vampire being like “Whoa, that guy’s weird!” He goes for Spidey, who notes that he’s pale and creepy and looks like a vampire, but come on, the dude with 6 arms knows there’s no such thing as vampires. Soon, Morbius has Spidey on the ropes. He’s overpowered and still trying to get used to his new arms. Morbius knocks him right out, and prepares to feed. But then Curt Connors shows up. He always seems to fly across the country any time Spider-Man needs him. Morbius lunges for the Doc, and he gets agitated. And, well, ya know…

Now there’s a sight to wake up to. Next time, we see the startling conclusion (And not in a reprint). Will Spidey survive? Will he get rid of his spare arms?  I mean, probably! Here’s the original cover to this issue: