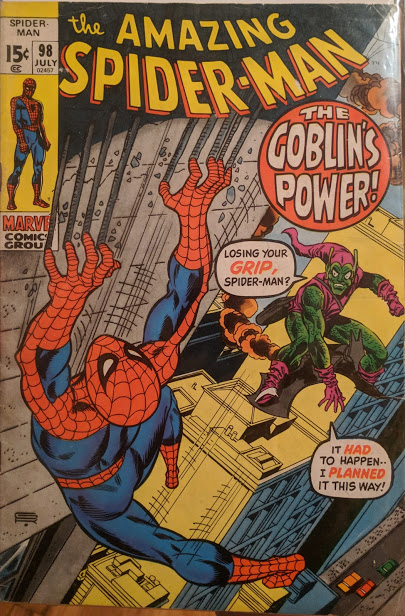 Pretty big error, not drawing the spider on the back of Spidey’s suit on this, one of the most famous Spider-Man comics. Whoops. Let’s get right to it. Green Goblin at the window, ODing friend at his side, Peter Parker is in a bad spot. The Goblin smashes through the window, ready to kill Peter, so Pete plays the only card he has:

It works, and The Goblin flees, not wanting to revert to Norman. Peter immediately calls an ambulance, and soon Harry is rushed to the hospital. He leaves it in the doctors’ hands and wanders out into the street, thinking that Harry just wasn’t strong enough to deal with being rejected by MJ. And that loving a girl can drive anyone crazy, which of course gets him thinking about Gwen. And, as luck would have it, she’s thinking about him, too, in London, thinking it was a mistake to go there.

The next day at ESU, Peter Parker is minding his own business when the drug dealer from last issue shows up and asks him where Harry is. When Peter realizes who this is, he gets angry. And that prompts the pusher dude to call in some goons. It’s a rare moment when Pete is too angry to worry about his secret, and he mops the floor with them. So, the drug dealer guy pulls a gun on him, but Pete easily disarms him.

Peter Parker: vigilante! As he leaves the alleyway, we move to the Daily Bugle, where JJJ wants to talk to Robbie.

JJJ is a complicated person. As soon as night falls, Peter switches to Spider-Man and starts looking for The Goblin. He’s worried about the Goblin’s boast that he had a new weapon that could destroy him. Soon enough, his prey finds him first, and he barely dodges the pumpkin bomb.

Spidey dodges around, but The Goblin is really emptying his arsenal, and one of his stun bombs finally connects. He uses that opportunity to hit Spidey with his new gimmick, and a thick mist envelops him. When he leaps out of it, Spidey finds himself unable to stick to walls. Fighting a brilliant chemist is turning out to be a real problem. And on top of that, he’s just run out of web fluid. Serious bad timing!

All Spider-Man can really do is keep dodging, and he’s starting to get exhausted. He tries a desperate move, making The Goblin think he’s fallen off a roof, then doubling back…

From this position Spider-Man can pretty much steer The Goblin like a skateboard. And, remembering how he reacted to Harry yesterday, he tries one last ditch effort by flying them to the hospital, right up to the window that will let Norman see his unconscious son…

Norman passes out, and Spider-Man makes a lot of quick assumptions. He decides that Osborn is normal again, that he won’t remember any of this, and that taking care of Harry will keep him too busy to become The Goblin again. He takes Osborn home, puts him to bed, and burns his Goblin suit. Then he heads home himself…

How ‘bout that? This was perhaps the most intense Spider-Man story ever published in its time. That, plus Stan’s defiance of the Comics Code, have made it one of the most famous. The whole business with The Goblin being able to take away Spidey’s powers is a little much, and it’s anti-drug message is pretty simplistic, but overall, I think it lives up to its reputation. I haven’t read it in at least 10, maybe 15 years, and I still find it as gripping as I did the first time. And I must say, it’s pretty crazy to own the original issues. Never ever thought that would happen.

This one ends with a full-page letter from a fan describing his disappointment in the Spider-Man series. Saying the team has repeated themselves too much, and is stuck in a rut. And it’s really to Stan’s credit that he published stuff like that, people mad at him, on the regular. He defended himself, but he gave his critics a forum back in the old days. Pretty cool, really.