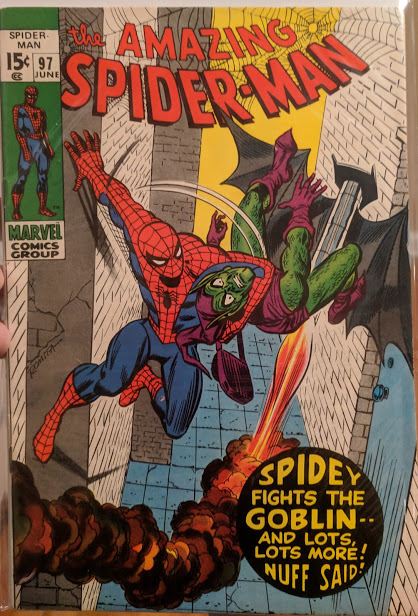 Most of my eBay finds aren’t in the best shape. I just want to have the books, I’m not trying to have the finest copies. But sometimes I get lucky. This one looks like it was printed last week! Frank Giacoia tags in on inks for this issue. So! Things are looking bad! The Goblin immediately starts attacking Spider-Man. Spidey webs him off his glider, but that doesn’t prove too helpful.

The Goblin is really keeping Spidey on the defensive, outwitting and avoiding him while taunting him by using his real name. Their battle spills out into the street and then into the sky.

The crucial thing about The Goblin in this period, the best bit for drama, is Norman Osborn doesn’t really know he’s The Goblin, and vice versa, usually. The explosion that gave him powers and drove him crazy separated the two personalities in his mind. So while Spider-Man is desperately trying to help his best friend’s dad, The Green Goblin just thinks Spider-Man is too weak to really attack him. They keep going at it, though, until…

He gave up awfully easily. Heading down to the street and changing to regular clothes, Peter is justifiably freaking out. He doesn’t know what The Goblin will do, and he doesn’t know how to stop him. But he’s got other worries. When he gets home, a sweaty, shaking, agitated Harry is still mad that MJ was treating him so badly, and of course blames Peter. But that’s not all, as he says he needs something for his headache and starts tossing back pills.

The next day, Peter & Harry are walking down the street and meet Mary Jane, who once again ignores Harry for Peter.

This cartoonishly aggressive drug dealer accosting Harry in broad daylight, who looks suspiciously like a blonde Stan Lee (??), hooks Harry up with some new stuff. They never even name the guy. It’s an awkward scene. Harry says he’s not gonna get hooked, and dude says that’s what they all say. Meanwhile, Peter has broken away from MJ, but can’t find Harry. So, he gets down to business. He says a wave of assaults and hijackings were reported last night, and he knows who’s responsible. He tries going by Norman’s office, but he’s not there. So he changes back to Peter to try it that way…

Rough stuff. This a pretty poor showing for Mary Jane. Harry kicks Peter out of their apartment, but takes it back before he can even leave, breaking down into a mess. Peter tries to be a good friend, but Harry says he’s just tired. So Pete leaves to let him get some rest, and Harry rushes to the medicine cabinet. He eats a bunch of pills and goes to lay down. Meanwhile, Spider-Man’s back at it, trying to find The Goblin, but with no luck so far. After hours of searching, he heads back home.

Things are looking bad. And getting worse!

Well. Our man’s in quite a grim spot now. His best friend maybe ODing, and his best friend’s dad outside waiting to kill him. It all comes to a head next issue.

Over the aeons, a lot of people haven’t understood the role of the inker in comics. But look how different Gil Kane’s art is under Giacoia’s inks when compared to his recent work with Romita. While you can tell it’s Gil Kane pencils in both cases, you can also tell an immediate difference in the art. That’s the magic of the weird, symbiotic relationship between penciler and inker.