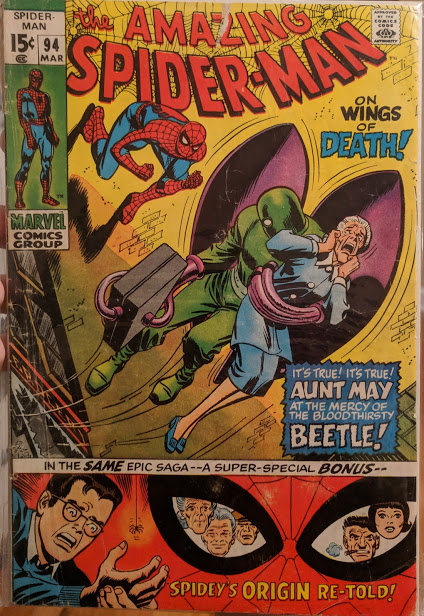 Ah, The Beetle One of Steve Ditko’s few misses as a costume designer. Maybe the only miss, really. Pretty weird. Sal Buscema hops in to ink this one, marking the first of literally hundreds of contributions to Spider-Man comics. Peter Parker is walking home, even more depressed now that Gwen’s left town. Then he tells himself a slightly modified version of his origin story. It includes a new beat that wasn’t in the original: Before he leaps out of the way of a car and sticks to a wall, this happens:

Stan’s far less reverent with this story than anyone else, changing all the dialogue and everything, like in the moment when he realizes the man who killed his uncle is the thief he didn’t stop:

Pretty interesting. Peter keeps talking to himself about his backstory, letting readers know why he doesn’t tell Aunt May his secret, and then there’s a great full page shot of Spidey surrounded by his enemies to give you a brief look at them. Then he realizes he’s subconsciously walked to The Daily Bugle while reliving his life, and he runs into Betty Brant on the street:

That segues into letting you know they used to date, and then he tells you he takes pictures for the Bugle and so on and so forth. Really catching everyone up. We’re 9 pages in and no Beetle. Peter decides to walk all the way to Queens to go see Aunt May, still thinking about the past, now showing a montage of all his friends. And then The Beetle finally shows up. He flies overhead and then breaks into a store in Aunt May’s neighborhood. The cops show up remarkably quick.

Meanwhile, Aunt May and the visiting Anna Watson are scared when Peter knocks on the door, and he learns The Beetle has been terrorizing the neighborhood, breaking into businesses and not even stealing anything. Rather than rushing out to find him, Peter takes Aunt May’s suggestion to go have a nap in his old room. Meanwhile, Anna actually calls Aunt May on… well, her whole deal.

How ‘bout that? While May goes out to get menaced by The Beetle like the cover promised, Peter has a nightmare about Spider-Man fighting The Beetle, his webs turning to chains holding him back. Then Anna wakes him up.

Peter stashes his stuff in a bush and Spider-Man swings into action. Turns out, The Beetle’s been breaking into these businesses looking for the one that shares a wall with the vault of an importing company. Could he not have figured that out from the air? Aunt May is his hostage to guarantee his escape. When Spider-Man appears on the scene, the cops start shooting, assuming he’s working with The Beetle. He’s not gonna let a little thing like getting shot at keep him from helping Aunt May, though.

They fall safely into his net, and now Spidey’s free to go after the villain.

They go crashing into an indoor pool. They have a brief fight, but it’s The Beetle, what’s he gonna do, really? Spider-Man just chucks him in the pool, knowing his big clumsy suit is too heavy to float..

There sure are — a lot of these sort of — pauses in Stan’s dialogue lately. London, eh? Going to find his girl? We’ll see how that goes. This issue features another letter from a different dude trying to explain how Peter’s biology could work. People were really into this in 1970.