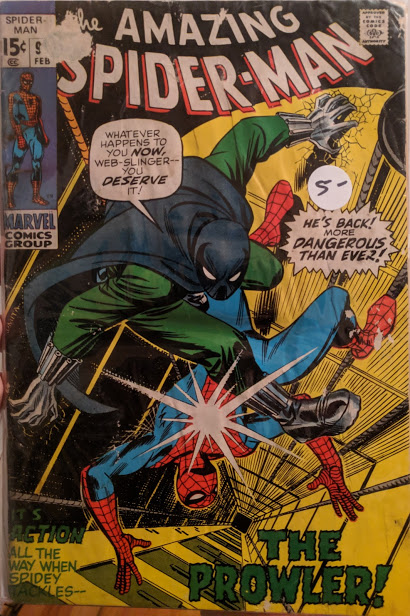 This is one of a handful I got dirt cheap at Heroes Con 2018. They had been wet, and so the guy was just trying to get rid of them. They were half off, and you can see this one’s sticker was only $5 to start with. At the time, not yet someone foolishly buying tons of Spidey comics, I just thought of them as artifacts. I have never even opened them. Let’s see if this thing’s even readable. Jazzy John Romita has taken back the penciling job for awhile and kept the inking job, a rare thing in this era, as we check in with the grieving Gwen Stacy…

Hey, this isn’t too bad! Someone put comic boards inside the front and back covers, I guess to try to keep it from curling. Honestly, not bad. It doesn’t even have a smell. For $2.50, I am satisfied. With the offer to move away on her mind, Gwen wants to believe Peter is worth staying in New York for, but even Peter isn’t sure since she’ll always hate his other life.

Not that I figured they would in a comic of this vintage, but no one’s talking about how Gwen’s going to pay for this place. Or sell it. Or anything. Peter trudges off into the night, feeling rotten. Super rotten.

Peter admitting he’s hooked on the thrill of being Spider-Man is something you don’t see too often. As Spidey swings off, we look in on Hobie Brown, aka The Prowler, and his beloved Mindy. She’s looking through ads for houses they might buy when they get married, but Hobie’s distracted. He’s thinking about how Spider-Man had him wear his suit and show up at The Stacys’ house awhile back, and now George Stacy is dead.

I just noticed this comic has no staples at all! This is a great angle, Hobie feeling like he’s been played. It makes sense. I’m not sure how much plotting Stan was doing vs. John at this point, but whoever it was, it’s a good development. Hobie suits up as The Prowler and heads out to get to the bottom of this. He decides to start his search at the Stacys’ place. Meanwhile, the man he’s looking for is having an existential crisis. He feels trapped in his Spider-Man identity, and decides on a course of action:

Well, this can’t end well. Some cops see Spider-Man swing by and decide to follow him. When he gets to Gwen’s place, she’s just crying on the couch. It breaks his nerve, but he doesn’t have much time to think about it, because The Prowler fires a warning shot at him.

Spidey tries to explain, but Prowler isn’t having it, so Spidey just tries to lead him away from Gwen’s so she won’t get hurt. This leads him back toward those cops who were hunting him, and, now we got a real situation.

They fight up onto the roof of a building before smashing through a skylight into an elevator shaft. Spider-Man is still really trying to avoid all this, but it’s not working.

Prowler almost doesn’t manage to stop his fall in time. Spidey tries to web him but can’t. As it is, he slams into the top of the elevator pretty hard, and Spider-Man sets out to get him to a hospital. First he dumps the Prowler costume in an incinerator (!) so no one will know who Hobie is, and then he… goes to a hospital, finds an empty room, puts Hobie in the bed, and then calls the hospital to tell them he’s in there? Sure, that won’t be hard for Hobie to explain or anything. Spidey also calls Mindy, who comes running.

It can. Somehow, in the space of the last few hours, Gwen has moved out and this lady has moved in. In the night! That’s trying to find a place to live in New York for ya. The now terrified lady inside tells Spider-Man Gwen went to the airport. He swings for all he’s worth, but you guessed it, Spider-fans:

If only poor Gwen had really stayed in London. And we’re out. I always loved The Prowler’s costume. Everyone talks about Todd McFarlane’s Spawn being a Spider-Man knock off, but honestly, look at The Prowler. I don’t think it’s a coincidence that the last thing McFarlane did for Marvel was a Prowler short in a Spectacular Spider-Man annual, one where his interpretation of the suit looked a lot more like Spawn. It was like a test run. I didn’t actually realize Gwen’s Uncle Arthur appeared in this time. His seemingly random introduction in the 90s was actually a re-introduction, I guess.

In the letters, a guy writes in to let Stan & Co. know that the science of Spider-Man is nonsense, which is pretty funny. He explains how DNA works and says Peter couldn’t be losing his powers in #86. Then he goes on to speculate that Pete’s parents were exposed to radiation that produced a mutated offspring, and the spider bite catalyzed a change in him. He even talks about how spiders stick to walls with hooks in their feet and suggests this is why Peter can stick to walls in socks but not shoes. He did some pretty good work, actually.