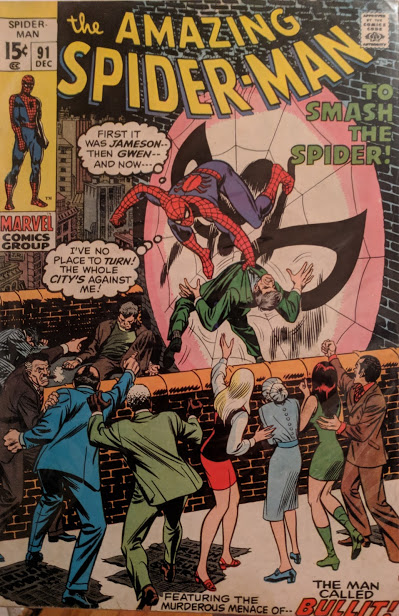 This issue kicks off with the funeral for George Stacy. With Gwen’s Mom already out of the picture, Gwen is all alone in the world now. And she blames Spider-Man for that.

Boy, that J. Jonah. Can’t even compliment a dead guy without taking a swing first. As the funeral clears out, Peter Parker is wracked with guilt. He doesn’t even know how to console Gwen, since he feels responsible for all this.

Pete tries to defend Spider-Man, but can’t. Gwen resolves to help the previously introduced Sam Bullit win the upcoming election for District Attorney, so he can rid the city of criminals like Spider-Man. Everyone knows Gwen Stacy dies, but this relationship was doomed either way. So, the next day, Gwen heads to his office, where he’s in the middle of some kind of martial artist practice. He makes it clear to us that he’s a jerk who thinks George Stacy was “too soft on punks” before meeting with Gwen.

What a sweetheart! He shoos Gwen out of his office and calls up JJJ, saying if the Bugle endorses him, he’ll deliver Spider-Man. He said the magic word, so JJJ is in. Much to Robbie’s chagrin.

The year is 1970, and he just told Joe Robertson things might have been better in the 30s. Stay classy, JJJ. Robbie storms out of JJJ’s office just as Peter is arriving at The Bugle. Peter thinks he’s never seen Robbie so angry. Pete wisely decides this is no time to talk to Jonah and just leaves. He heads home, takes a shower, and catches an interview with Bullit on TV…

The next day, at a campaign rally, Bullit seemingly makes “Crush Spider-Man” his new slogan, whipping the crowd into a frenzy. That night, Spider-Man is out for the first time since George Stacy’s death. He notes that the streets are empty. JJJ & Bullit have made everyone so scared they’re not leaving their homes. And worse, he wonders if they’re right about him. He decides to just switch back to Peter and walk home. And then a car carrying Sam Bullit speeds up to him on the street.

Bullit’s goons hold on to Peter  as Bullit tells him anyone who doesn’t help him is his enemy. Peter compares him to Hitler, which doesn’t make him too happy. Bullit speeds, off leaving his thugs behind to start beating the hell out of Pete when he won’t tell them where Spidey is.

They leave him crumpled up on the pavement, pretending to be injured until they’re out of sight. And then… well… what do you think?

Spidey webs the other goon to a street light and chases this one into an alley where he webs him up and throws him into the trash, telling him this is his message to Bullit. Spidey’s feeling pretty good about himself for the first time in a couple of days as he swings home. He should know better, though.

Uh-oh! How’s Spidey gonna get out of this one? Also: how did they get in? Is Harry home? Is Gwen legit letting this guy Bullit lead a witchunt for her man? That doesn’t feel right. Maybe more importantly, how intentional do you think it is that Sam Bullit looks like Richard Nixon? It can’t be a coincidence. On a lighter note, the letter page features someone writing in as Hobie Brown, aka The Prowler, saying he’s figured out who Spider-Man really is, and if he doesn’t get a bigger role in the series, he might tell JJJ. That’s pretty fun.