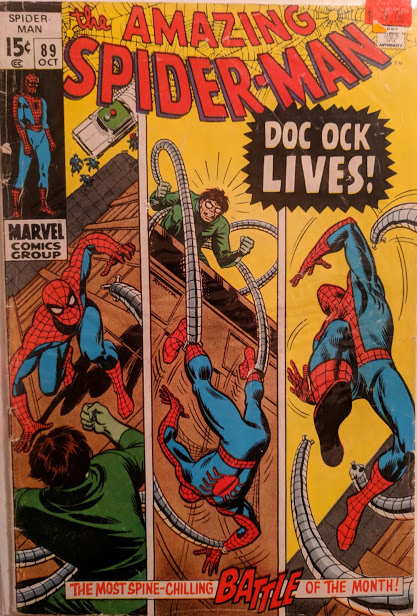 This one I’ve had for many years, but I can’t honestly remember the details of its acquisition. I know I got 90 first, and then wanted to get this one for reasons that will become obvious. But this one… no idea. This one marks the auspicious debut of the legendary Gil Kane on pencils, as Romita keeps drawing covers and moves to the inking job for interiors. Where Romita’s timeless linework perfected the cast of the book and set the look of Spider-Man and his world in stone, Kane brings a singular dynamic approach to his compositions and action scenes. Romita inks with a heavy hand at first, keeping a lot of his style on the page, but it’s not long before the unmistakable choices and quirks of Kane shine through.

Pretty big contradiction on the front page. Spidey drops into an alleyway thinking he won’t shed any tears for his fallen foe. When he emerges as Peter Parker, he looks at today’s Bugle and is unnerved to see they didn’t find Doc Ock’s body. And since he’s sure the arms, at least, would’ve survived the blast, now he’s worried that Doc Ock isn’t as dead as he believed. That’s when his pal, Randy Robertson, Joe’s son, runs into him on the street.

Rather improbably, as the tormented Peter walks away, Doctor Octopus’s arm snakes around the corner and grabs the same paper out of the trash Pete just threw down to read the news of his own demise. What’re the odds?? Doc Ock stands in the alley way yelling to himself about how he’s glad they think he’s dead, so they won’t see his next attack coming. Maybe don’t draw attention to yourself, then, Otto. Elsewhere, Peter hasn’t wasted any time, getting up on the roof of a building and switching back to Spidey to begin hunting for Doc Ock.

Romita might be streamlining the rough edges and making sure the eyes are right, but there’s no mistaking a Gil Kane montage panel. Spidey’s search takes him by The Daily Bugle building, where JJJ naturally sees him and starts losing his mind. Spidey doesn’t stop in to bother him, but that doesn’t stop him from yelling to Joe Robertson to lock the doors and call the cops.

Kinda funny to see Robbie rendered as such a real person next to the sneering cartoon that is JJJ. Everyone sure is concerned with pollution all of a sudden in this issue. Then, Spidey finally finds his prey, who has begun trying to tear down a power plant. Spidey realizes that if he succeeds, he’ll blackout New York, and dives right into him.

Dock Ock keeps smashing things left and right, and as usual, Spider-Man’s barely keeping out of reach of Ock’s arms.

Looks like a solid hit, but Ock pulls his arms back in and manages to bash Spider-Man into the same chimney. They battle back and forth, Spider-Man mostly on the defensive…

… he tries to put some distance between them, but Ock can move pretty fast on those arms. Then he knocks a water tower over, and Spidey jumps under it to try to keep it from falling on the crowd below.

Spidey manages to flip the tower back up on the roof, but that leaves him wide open, and Doc Ock seizes the opportunity…

…and tosses the battered Spider-Man off the roof. Things look pretty grim for our hero, and they’re about to get a lot worse next issue.