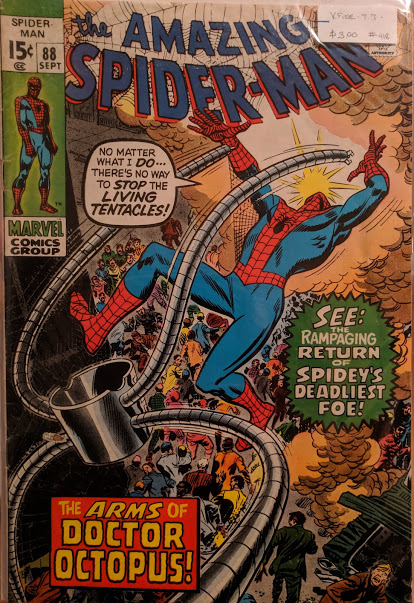 Not Doctor Octopus, but his arms as a villain. That’s unusual. Jazzy Johnny is back to full pencils this month, with Jim Mooney on inks. This one opens with said arms on display at The Museum of Natural Science. As a guy is giving a talk about how Doc Ock can mentally control them, so he’s been imprisoned very far away, we see Ock trying to control his arms from “a lonely midwest prison”… and it works!

Zom! Of course, it’s not long before Spider-Man encounters the runaway arms, but they’re ready to fight anyone who tries to stop them from marching all the way to wherever Doc Ock is being held, so it’s fightin’ time.

Spidey has no choice but to web and hold the collapsing wall until firefighters can clear the streets, and Ock’s arms scramble away. By the time he’s able to move, Spidey has no chance of finding them, so he just heads home to study for school. The next day, Peter sees a note that Professor Warren wants to see him. He gets to see Gwen for a moment, still happy to see him back to normal, and then goes to the Professor’s office.

A crestfallen Peter rejoins Gwen, who tries to cheer him up. Meanwhile, Doc Ock’s arms have made good time to… wherever they were going, and bust Doc Ock out of jail.

Ock being able to control his arms from a distance seems a bit much. Is this just limited telepathy and/or telekenesis? What if his arms were in Russia? What if he was in space? It feels like there should be limits, and there aren’t any. As Ock scrambles to freedom, in Chicago, J. Jonah Jameson and his son, John, are boarding a plane. John the astronaut has managed to get JJJ a ride in the same plane a “General Su” is taking to see The UN. JJJ hopes to get a scoop, but John warns him the military guards won’t have any of that. They’re about to have much bigger problems, though, as it just so happens Doc Ock decides to hijack this very plane. He gets a hold of it as its taking off and forces his way into the baggage compartment. So it’s only a matter of time before…

I appreciate Doc Ock’s mix of supreme self-confidence and absolute insanity. Not just anyone could make a portly middle aged guy seem like a threat, but Doc Ock (written well) is a rentlentess, unstoppable evil. He doesn’t have to be pyshically imposing, his arms are crazy dangerous. Tortured backstories and “he’s got a point, but…”-type villains are cool, too, but sometimes you just want your hero to fight a BAD guy. Soon, Ock has taken over the plane. When he learns General Su is on board, he immediately decides to hold him for ransom. Doc Ock sees opportunity everywhere.

Pete & Robbie meet Captain Stacy at the airport, which, to make matters worse, is full of protesters and counter-protesters waiting for General Su. Ock says everyone’s safety depends on no one approaching the plane, but the protesters are getting out of hand, so it’s time for Spider-Man to show up. He manages to get to the plane without being spotted, and then…

Spidey tussles with Doc Ock as everyone else flees the plane (John Jameson giving a weird speech about America to General Su in the process?), and then a furious Doc Ock starts trying to drive the plane with two of his tentacles while still fighting Spider-Man.

And there you have it. The death of Doctor Octopus. He is certainly gone forever. Don’t mind that “To Live Again” caption. It means nothing. Doc Ock certainly won’t appear in the very next issue. He’s dead, guys. Sorry.