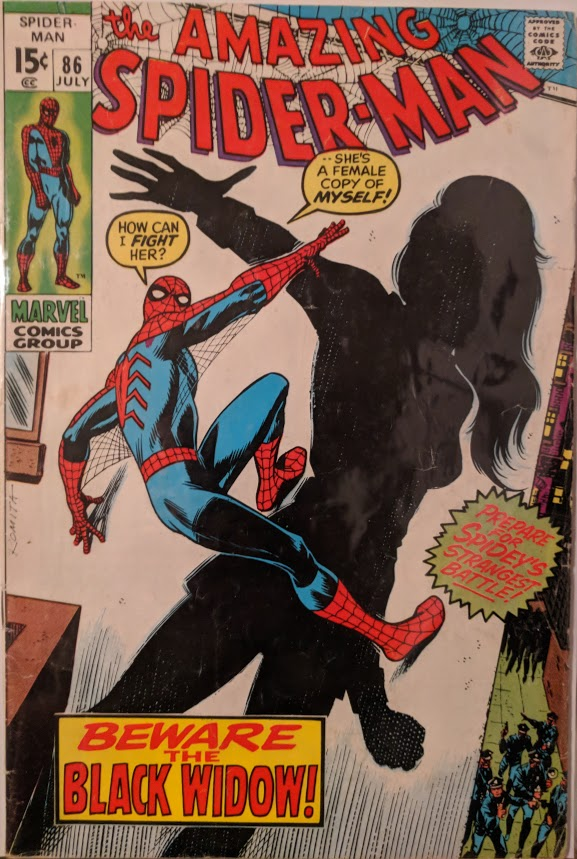 Jumping ahead now to 1970, where we can settle in for a nice run of consecutive issues. By now, it’s Stan Lee scripting, the legend John Romita penciling, and stalwart Jim Mooney inking every month, but this issue’s credits in particular are a little different. Romita just provides layouts for Mooney to finish this month. But Mooney’s a talented penciler himself, and inking Romita has influenced his work, so it’s a pretty seamless transition. Peter is now well into his college years. He’s dating Gwen Stacy and lives with his best friend, Harry Osborn. He and Flash Thompson have even moved on to a largely friendly relationship, it’s a whole new ball game in his social life. And in this issue, he’s going to help reboot a long standing Marvel heroine. But maybe not on purpose. I was very curious about this one because I don’t know much about Black Widow prior to it. I know the broad strokes of her story, but I don’t really know her initial powers, even. But I’m aware of this as the comic where she becomes the character we think of as Black Widow (Which is rather random given her histories with Iron Man & The Avengers), so we can all learn about her together here.

Well, that’s weird. Black Widow’s already sticking to things? Does she stick to things today? I can’t think of her doing so. We’re kinda jumping into a story in progress, I guess, but I don’t have ASM 85 as of this writing, so I’m picking it up with you. Natasha scampers off, thinking that learning the secret of Spider-Man’s powers and adding them to her own would make her unstoppable. Then she flashes back to her origins for a bit. How Russia pressed her into spying on the threat that they’d kill her husband, how she fought Iron Man and fell in love with Hawkeye. How she switched sides, worked with The Avengers & SHIELD. And how one of those capers led to the death of her husband, the original Russian supersoldier, Red Guardian. She walked out on the costumed life then, and has spent the interim being a socialite and hating it. She wants to get back to superheroing, and she plans to use Spider-Man as her model.

Meanwhile, Spidey swings home, desperate for some rest to clear his head, but the place he shares with Harry Osborn is being visited by Gwen Stacy and her Dad. Peter manages to web some clothes out of his room and change outside, but forgets what his face might look like after a beating severe enough to leave him in this condition.

Gwen immediately blames Spider-Man for this, and makes him promise that, if Pete really loves her, he’ll never have anything to do with Spider-Man again. Well, that’ll work out, I’m sure. Harry offers to drive the Stacys home, and Captain Stacy once again kinda implies he knows Peter’s secret. Peter is left alone, worried and sad. You know, the usual. Elsewhere, the Black Widow has put together her new ensemble.

But, she says, she’s still just a “female imitation” of Spider-Man, so she needs to hunt him down, “snare him, and see what makes him tick.” I’m only more confused. I thought this would be were she became “a copy” of Spider-Man, but she seems to already have wall crawling and webslinging in her arsenal. She’s got a handy practice area setup wherever she lives, and flips around shooting targets and breaking stuff for a bit before heading out to get her man. She swings by JJJ’s office, and boy is he not into it:

Her prey was trying to study, but his messed up head won’t let him, so… he decides to go swing around and make sure he’s not losing his powers. Now, I’m no doctor, but this doesn’t seem like this right course of action to me.

I mean, yeah, but you’ll also probably splatter all over the pavement. Soon enough, he gets lightheaded and starts messing up. This leads him to JJJ’s office for a quick round of insulting each other. You’d think this is where he’d hear about Black Widow, but Jonah says nothing (Well, about that). Then he decides to go check in on Aunt May, but she sees him out the window and freaks out. Batting 1000 today, Parker. On his way back, The Widow finally catches him. It’s hard to tell what her angle is, but she just zaps him. He acts like it knocked him out to try to get some breathing room and see who he’s dealing with. She catches him in a web(?) for his own safety, and then they collide when he breaks free of her line.

Natasha wants to test herself against a similar opponent, but poor Spidey is not doing good with his obvious concussion. She’s pretty disappointed.

She’s probably right about Woody Allen’s interest in fighting Spider-Man. Then Spidey snaps her rope and webs up her wrist blasters so she can’t zap him anymore, and she… immediately gives up? She decides he must have been born with his powers, and therefore there’s no hope of learning from him, and… leaves. And Spidey just lets her, I guess, he’s not even in this sequence.

Spidey swings home, barely able to keep upright. He’s afraid to go to a doctor in case they want a blood sample, so he decides to check his blood himself, see if it’s still all spider-y. Except he’s freakin’ out:

And that’s that. Pretty random! I think Natasha will move on from here to her relationship with Daredevil. I’m not 100% sure on the timeline there. Really nice to see John Romita in his prime. It’s strange, his take on these characters is so definitive that, like a lot of people, it’s how I think of them. But, at the same time, I’ve only read some of the Romita Spider-Man. Less than Ditko, probably. So it’s cool to see him doing his thing here. Come back next time to see if Spider-Man is really unmasked at last!