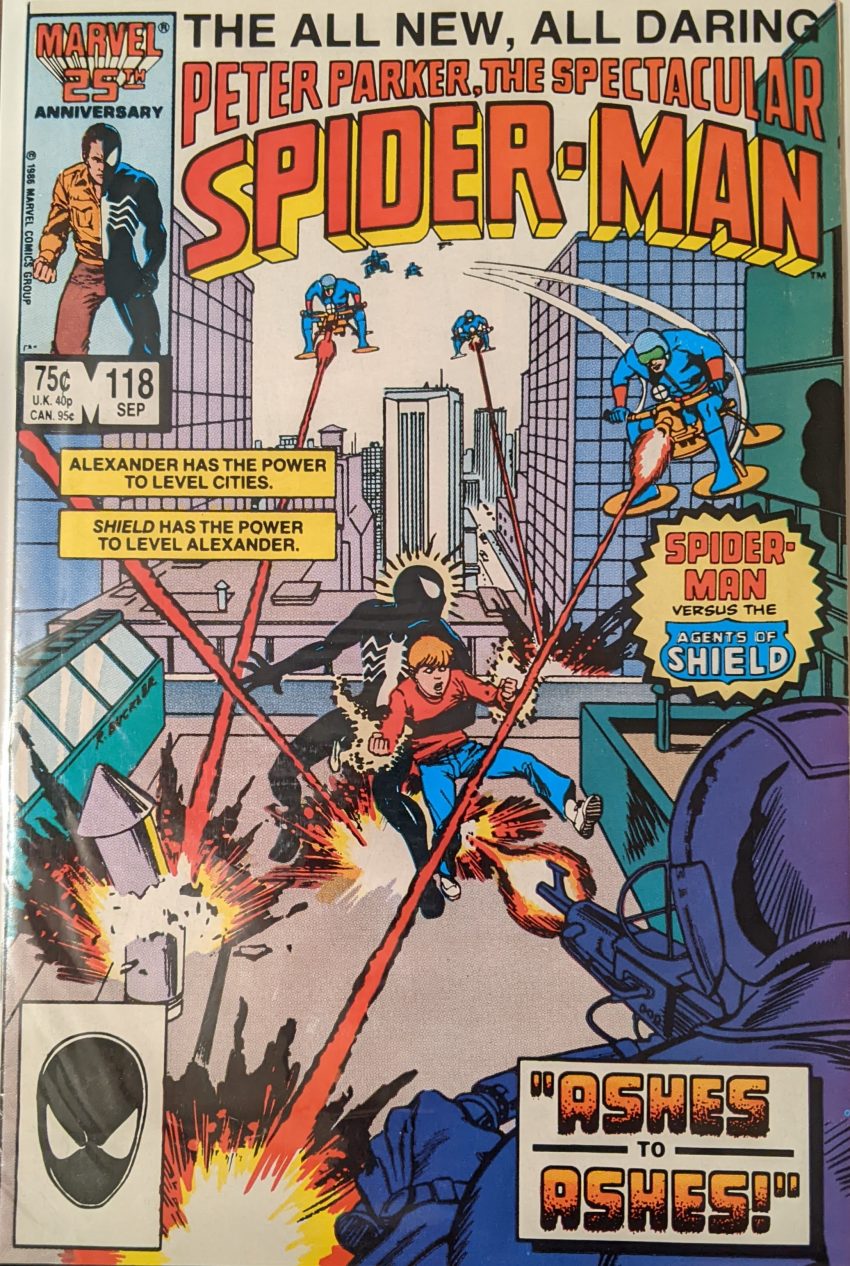 After months of wandering around the fringes of this comic, little Alexander Woolcot is finally going to be in the A-plot. This month’s line art comes from Mike Zeck and Bob McLeod. Is this their first collaboration? I know Zeck used to be inked by John Beatty a lot, and Kraven’s Last Hunt would soon solidify Zeck/McLeod as a superteam, but I don’t know when they first paired up. Anyway, this one opens with The Foreigner coming to see Kingpin in his usual fashion: Wearing a ridiculous disguise, this time a stinky, aggressively Bri’ish homeless guy. Kingpin’s staff are pretty perplexed when they’re told to send this character in to see the boss.

Foreigner references the classic DD story Born Again, into which Tom DeFalco injected that pointless aside in ASM 277.

Seems unlikely! Speaking of Spidey, Peter Parker’s at The Bugle, and the teacher who first brought Alex to Peter’s attention with accusations of child abuse at the hands of his dad in TAC 115 is there. He tells Peter Alex is missing, and since Spider-Man got involved last time, he wants Peter to tell Spidey to look for him. Peter reacts incredulously to the idea that he could contact Spider-Man.

Oh yeah, Peter’s yet again trying to quit being Spider-Man, I forgot. Ugh. The worst recurring plotline in Spider-history. Alex, as it happens, is walking by The Bugle now, still hiding out, still thinking he’ll go to jail for vaporizing his dad. But some cops notice him, and decide to pick up a truant kid. He reacts rather predictably given the last few issues.

Yet another rogue low-level SHIELD boss bout to make a mess of things. Not the best organization, SHIELD. Either infiltrated by bad guys or something like this.

I guess this is another bit of “Is Lance Bannon The Hobgoblin?” I’m so unused to that sort of thing happening outside ASM it was kind of jarring. Kate Cushing thinks Peter just doesn’t have what it takes as Spider-Man leaps out a window. Could he not be trying to get to ground level and get better pictures than Lance would dozens of floors up? Spidey checks in with the cops, gets some casual racism about mutants and the general direction Alex ran in, and takes off. He catches up to the boy, recognizes him, and tries to talk, but Alex is scared and angry and powering up his beam attack. Then, I believe Peter David makes a very pointed joke about DeFalco’s terrible Firelord story in ASM 270 in panel 1 here:

I would note, as I often do, Mike Zeck drawing more or less “Todd McFarlane eyes” on Spidey before Todd gets the book. Alex gets lucky and hops in a cab. Spidey gets a tracer on him, but is still sitting on the sidewalk, getting his wits about him, when SHIELD shows up. Soon, Alex is back on the street and sees he’s being followed by Spider-Man and a flying car. And then the SHIELD goons radio in for “heavy artillery” and get 3 agents in Mandroid armor dropped in to fight a scared little boy.

The sock hop??? What year is this??? Spidey dives in, dodging between the Mandroids until he can scoop up Alex and bolt. Alex asks why he’s helping him, and Spidey says “Because you need it.”

What a cool and fun ending. The feel-good comic of the year, this. First, we get a kid suffering with child abuse, then he kills his own dad, and then he’s gunned down by trigger happy feds. Thanks for the good times, Peter David. Very fun.