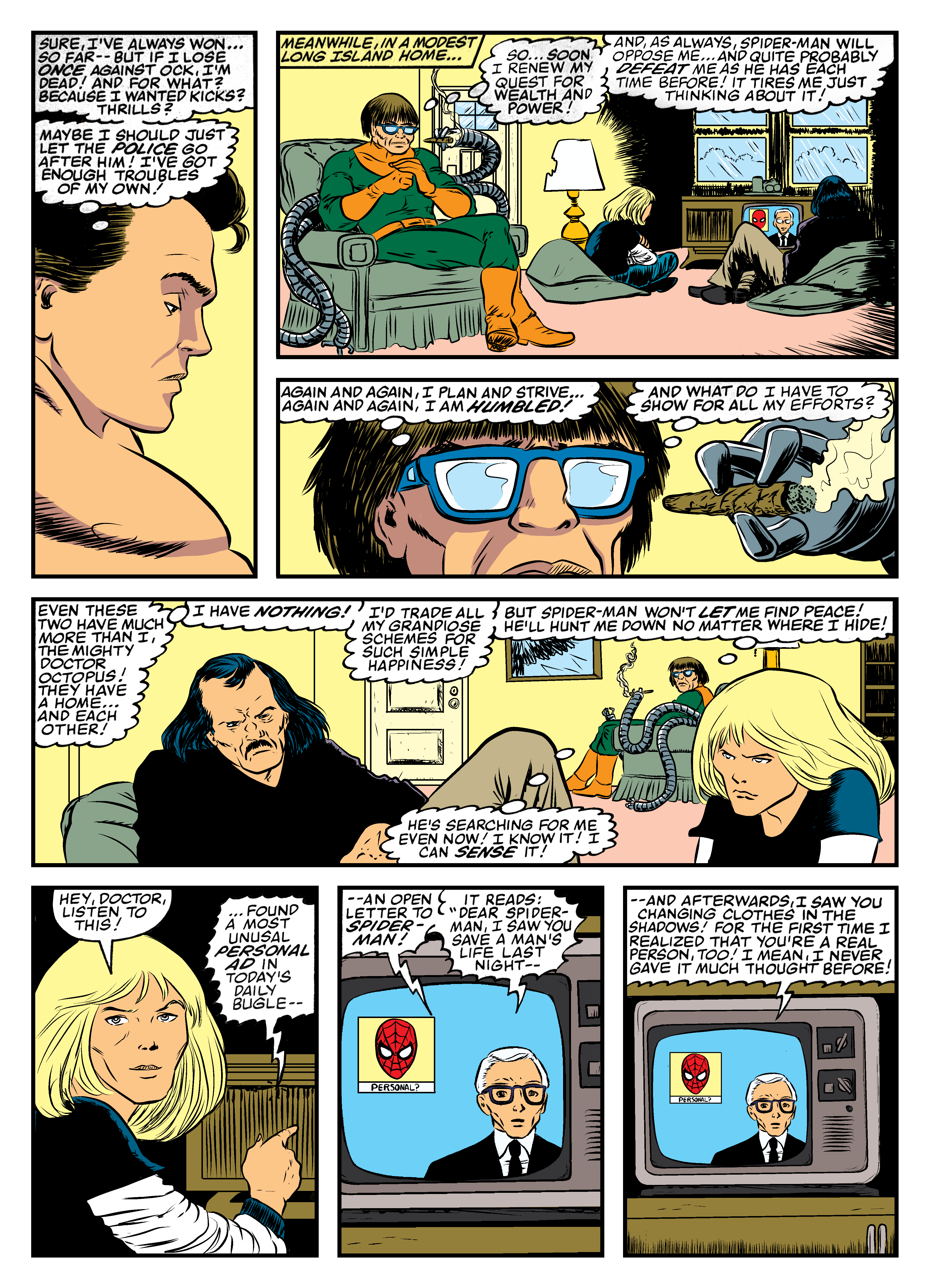 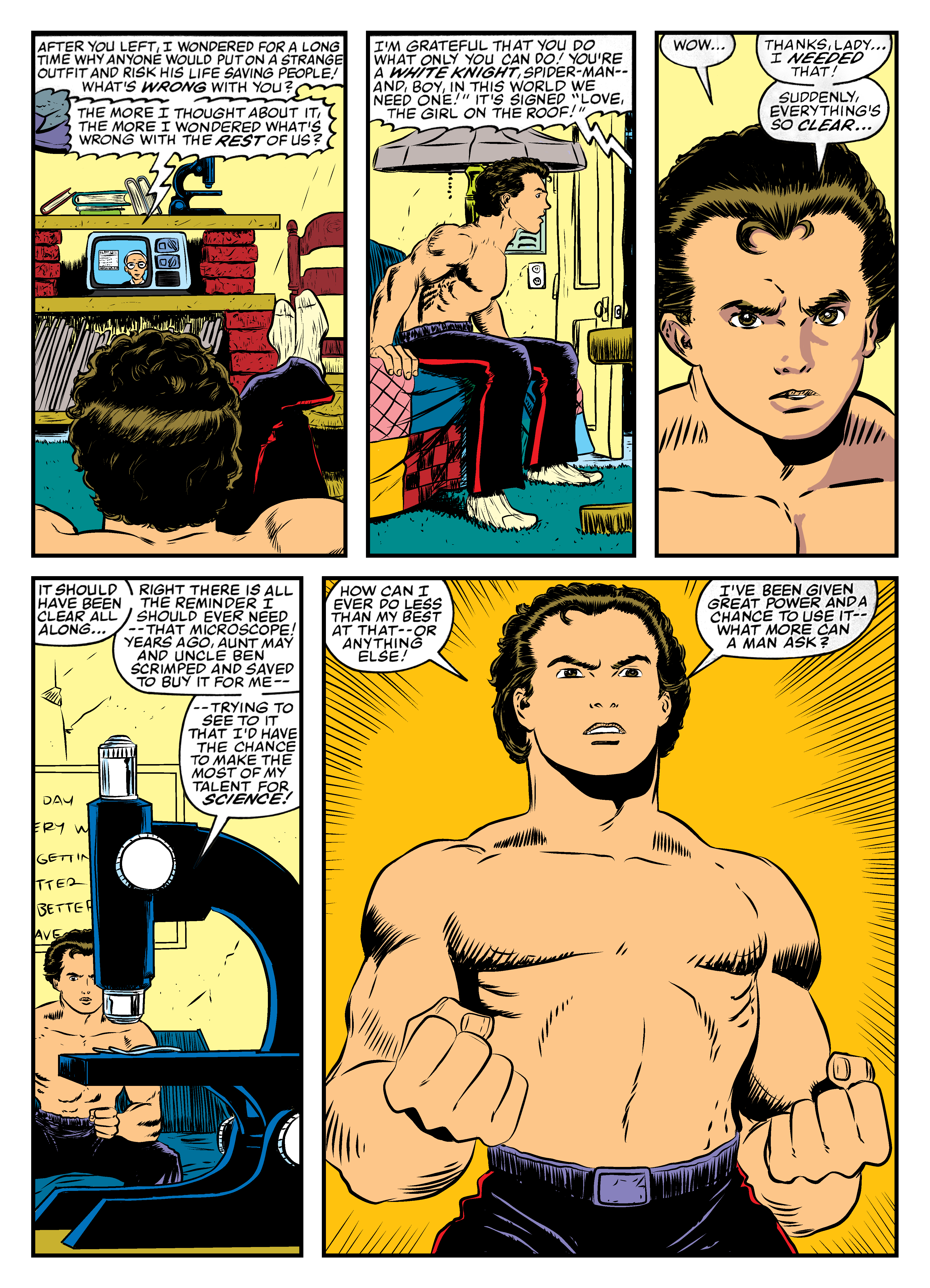 Our man is finally out of his depression! It’s about time. Chris and Louise… who are these people? Why does Doc Ock even know them, let alone trust them? No idea. They appear to have been created for this book, and never showed up in anything else, as far as I know. It’s super weird for Doc Ock to randomly have some buddies, as he has always been portrayed as a loner and total psychopath. He’ll hire a whole army of goons to do his bidding, but he doesn’t make friends with them. I can only guess Shooter wanted the hero and villain’s self-doubt to mirror each other and needed a way to get there.

Here’s some trivia that will never help you on Jeopardy: As many Spidey nerds may know, that microscope was a gift from Uncle Ben & Aunt May in the very first Spider-Man story, the day before Uncle Ben died. As only the most devoted probably know (And I only found out last year), in Amazing Spider-Man #181, Peter left the microscope on Uncle Ben’s grave on the anniversary of his death, the way you leave flowers. Only it’s a microscope, and that was a stupid thing to do. Not only that, but the second he walked away, some random dude came by and picked it up. Gone forever. And yet, Peter had it in his apartment again pretty much immediately after. No one working on the comics seemed to notice he got rid of it. This isn’t the last time it would get a big moment in a Spider-Man comic, either. Whoops!

My photos of the originals for these pages were atrocious, and I had to do gross things to them to make them visible. Sorry! 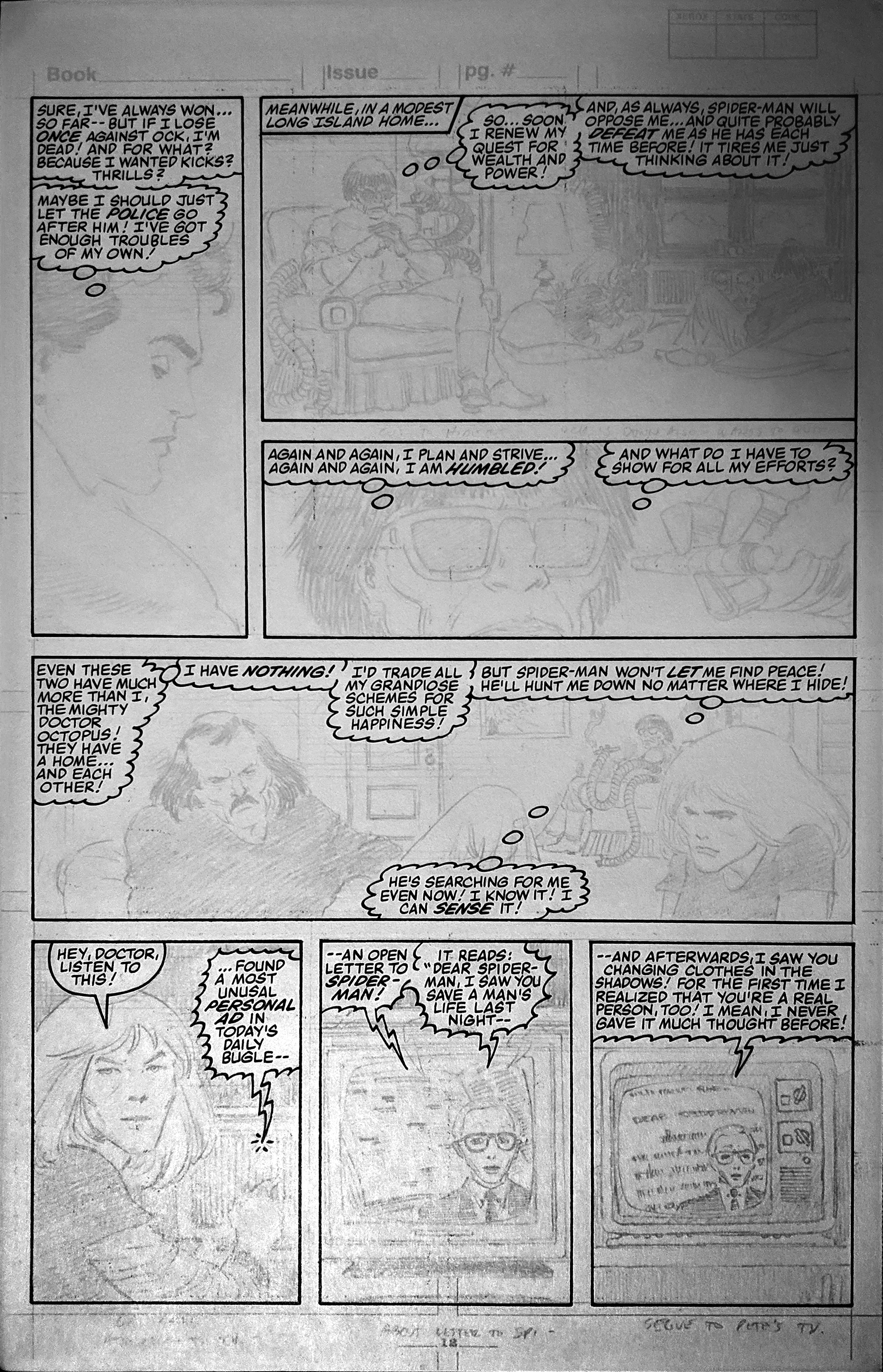 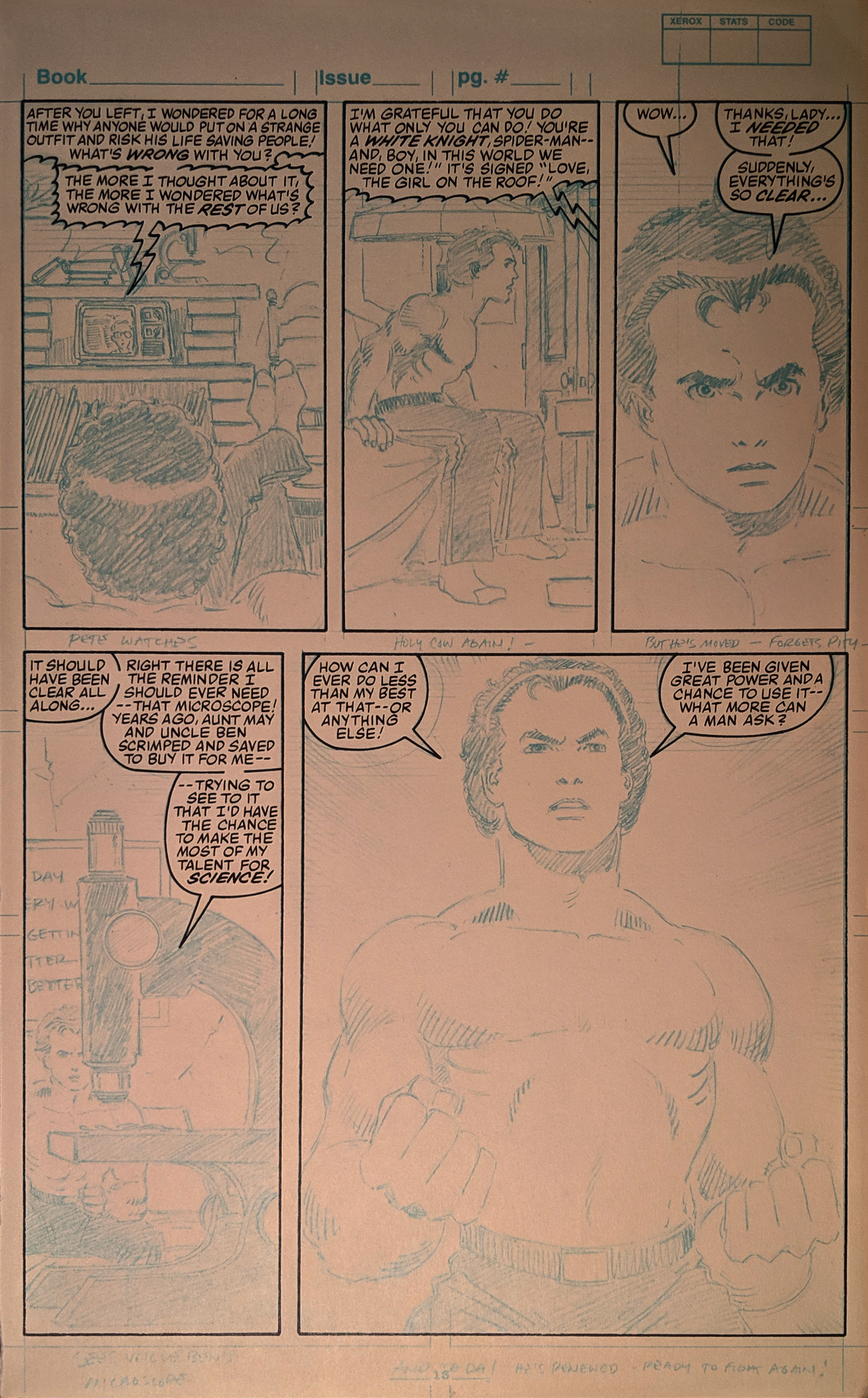 Funny thing about page 11, I’ve seen it so many times. Pencil art was often inked right onto the board, so it can be hard to find originals, and when people wanted to show examples of Romita, Jr.’s early pencils, the Try-Out Book gave them some of the only pages they could find.

One more thing today: I knew exactly how to color Peter’s apartment. How? Well… 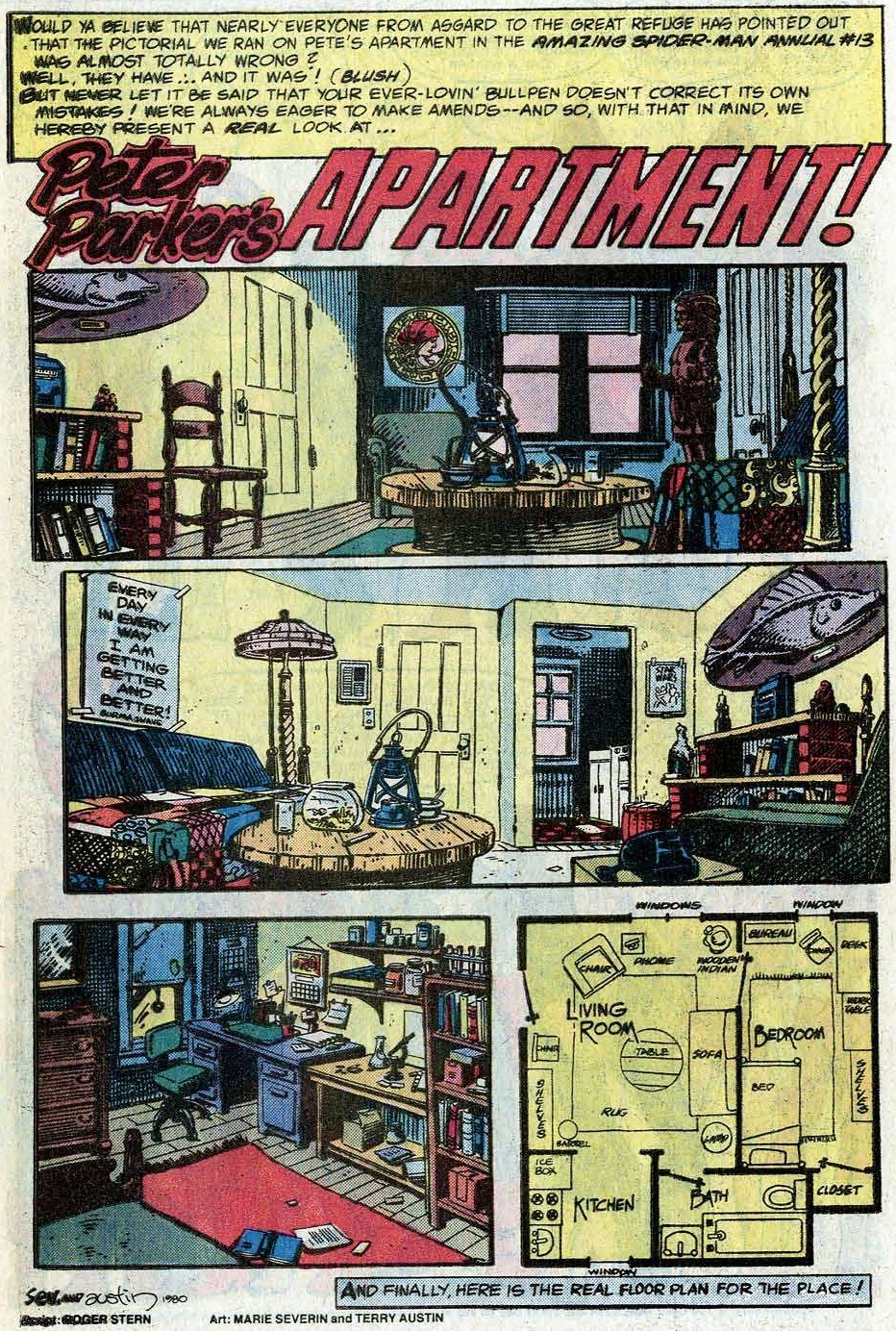 Where in the world did Peter Parker get a giant stuffed marlin? They used to print stuff like this all the time. Really helpful to the artists, I imagine. I know Romita, Jr. did floor plans and designs for The Daily Bugle when he was on the book, too. So that was easy! Except for the above-mentioned goof, Peter’s apartment was pretty much the same from the 70s to the late 80s. Except in the 80s sometime, somebody put a print on the wall by Patrick Nagel, and that stuck. You know, they guy who did the Duran Duran album and launched a thousand hair salons. I put the Nagel print into the last panel of page 9 just to amuse myself, but didn’t give myself room to talk about it last post.