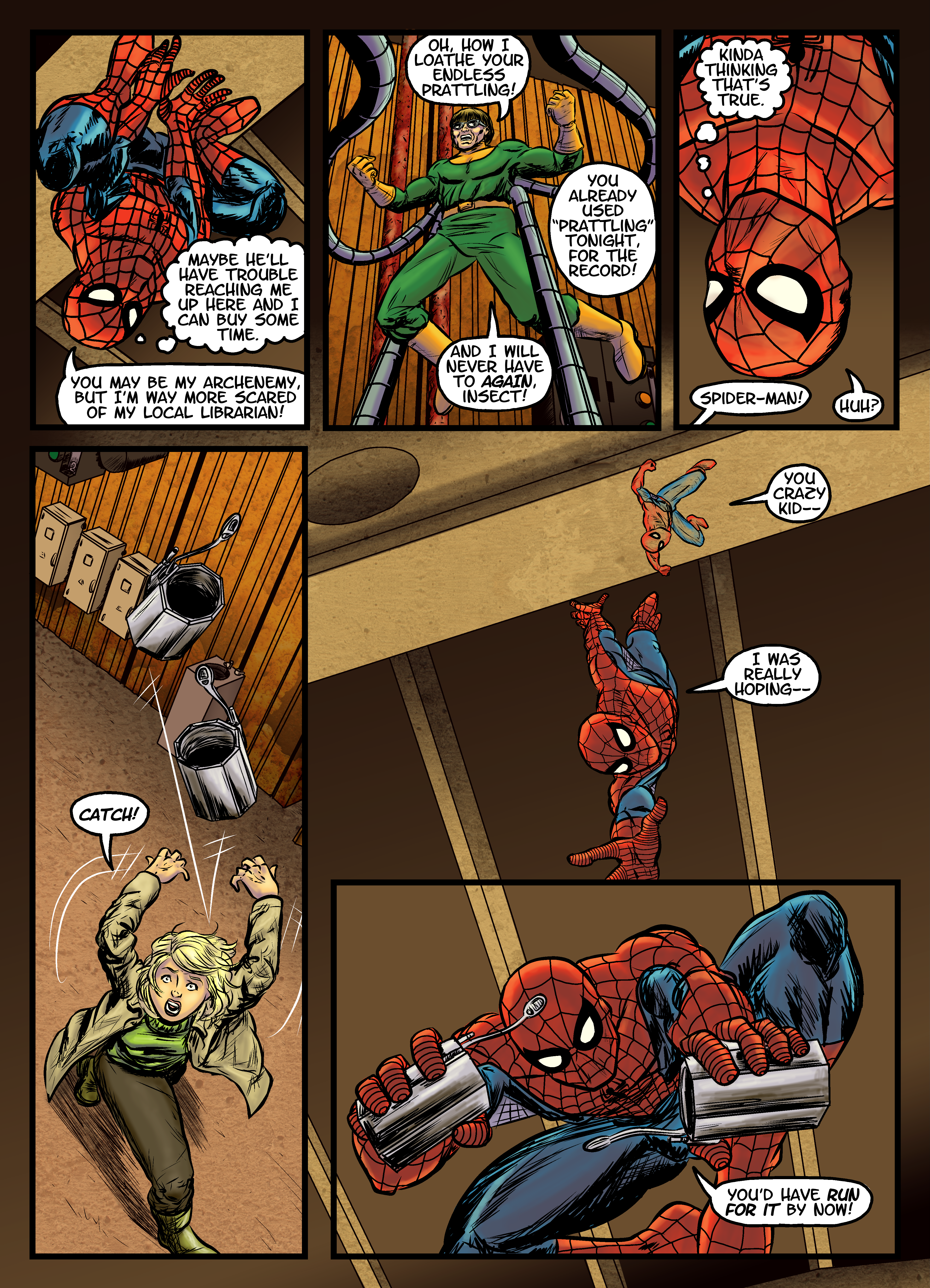 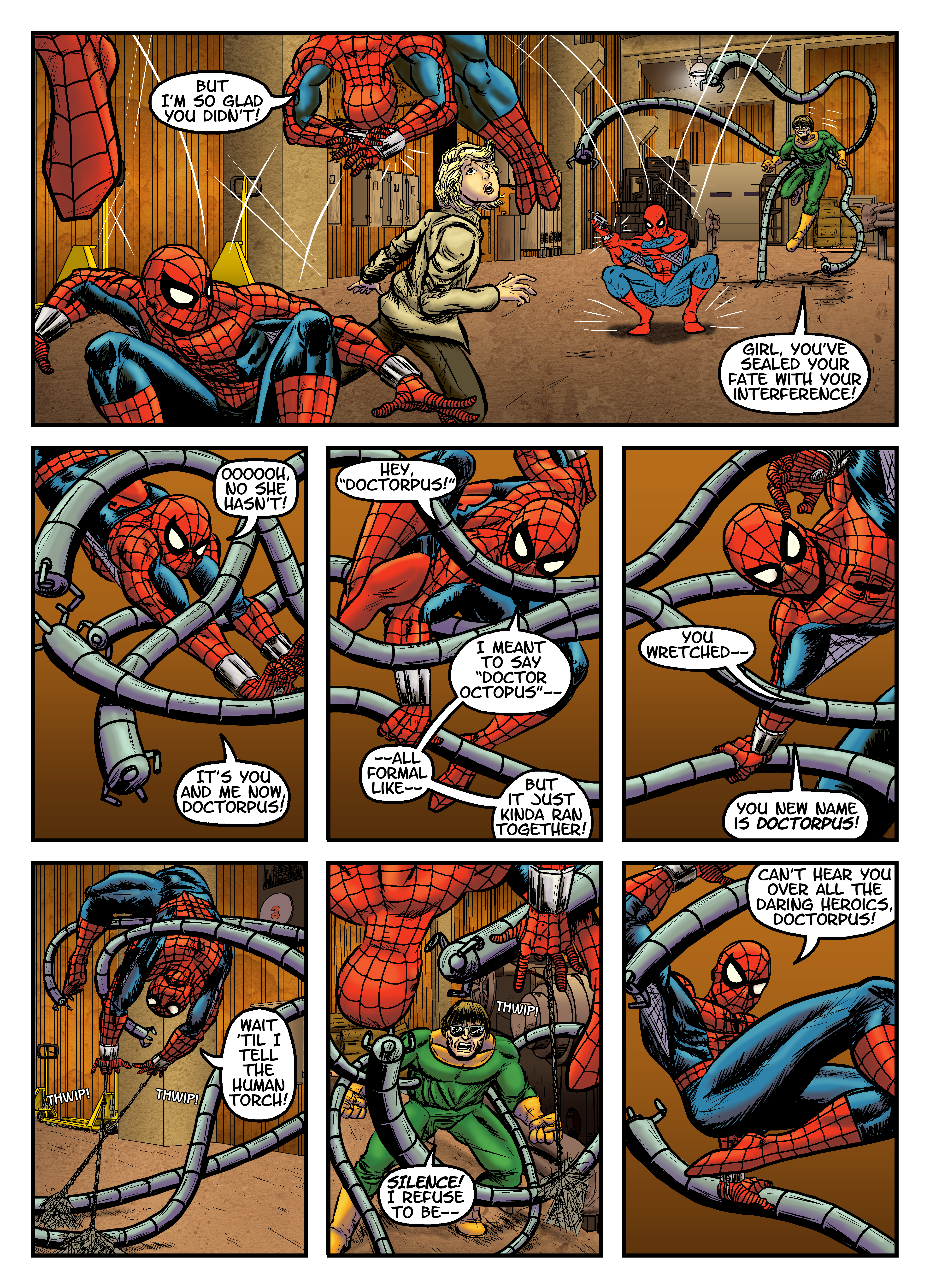 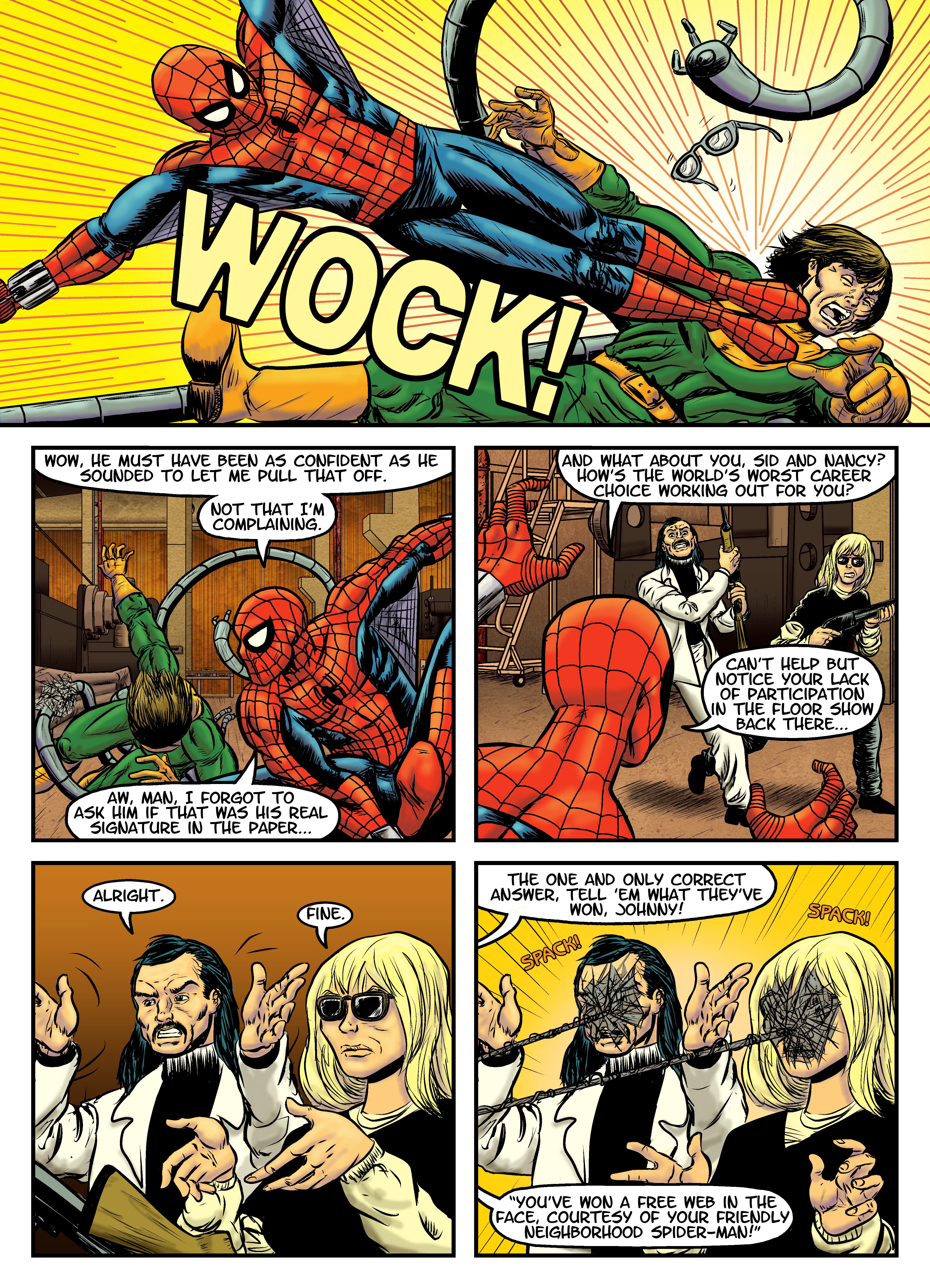 Quite pleased with that “prattling” bit. My objective here, pass or fail, was to make it seem like Spider-Man never stopped moving. Just zooming through the panels. ‘Cuz for my money, Doctor Octopus is Spidey’s most dangerous villain. Sure, sure, you think Venom is scary, or you like the inherent drama of The Green Goblin. I get you. But almost every time Spider-Man and Doc Ock met for the first 10, 20 years of comics, Spider-Man almost died. Period. I mean, consider that he’s flailing these giant metal poles at him, that can reach so far from his body. Spider-Man is at such a disadvantage. No one is more likely to kill him than Doc Ock, in my opinion. If your Doctor Octopus fight scene isn’t pushing Spider-Man to the absolute limits of his abilities, it’s not a good one. On the other hand, I only had 8 pages to get Spidey into and out of a death trap, do a fight scene and tie up the whole book, on top of wanting to finally give Janet some agency in her own story, so I had to make some concessions. Thus, I felt like the only thing Spidey could do is throw caution to the wind and go right at him to end things quickly. Maybe Ock went down easy because of his mental state previously in the book. Maybe Spidey’s right and he was just so sure of himself he messed up. That’s also why Chris & Louise just watched it happen. I figured the fighting should be all Spidey vs. Ock. I dunno. You can decide if this worked.

Rrrreeeeeally struggled with the knockout panel. I was kinda going for your classic Sal Buscema kind of “POW!” panel, but ultimately, I think mine’s kinda stiff. For reasons I no longer recall, I became convinced I needed a clear, full-body shot of Spider-Man… maybe I couldn’t figure out how to make it look good with both feet otherwise… so I kinda left all the impact to the Doc Ock figure. I dunno. I could do it better, but it’s done. The Sid & Nancy reference is maybe a stale reference in 1983, let alone 2020, but whatever, I like it. And “tell him what he’s won!” is a cliche, but the particular phrasing in the comic is a direct pull from the comedian Bill Hicks, a distinctly 90s reference. I don’t even remember the bit it came from, it’s just stuck in my head all these years. So it’s kind of all over the place.