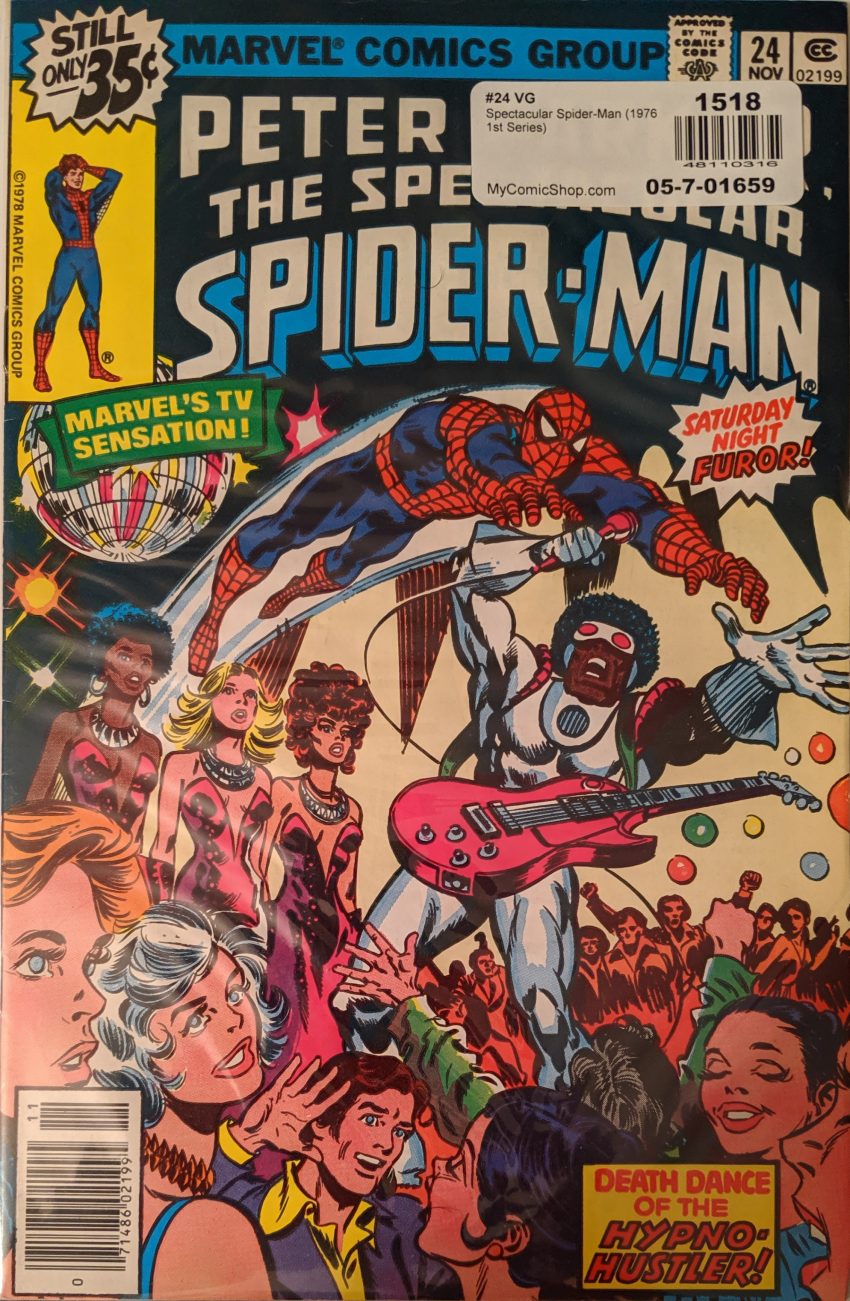 I started this thing as “All The Spider-Mans I Have” with the implicit idea that I don’t have all of them. But since then, I’ve been slowly accumulating more and more and… It’s getting to a point where the only ones I don’t have from the volume 1 era are gonna be the obscenely expensive old ASMs. And even some of those have miraculously made it into my hands. As of this writing, much, much later than last post, I’ve got every issue of Team-Up Spider-Man appears in, and (by accident) almost all the ones he doesn’t. And as I have been closing the gaps, I’ve wound up getting books I didn’t even necessarily want out of a completist impulse. Like this one. Who cares about The Hypno-Hustler? This isn’t going to be a good comic, or an important comic. I had every intention of skipping this one. And now I have it. So… here we go. As we were warned last issue, this one is called “Spider-Man Night Fever.” How timely. Ugh. Frank Springer hops in the always rotating artist’s chair as both penciler and inker. Springer’s more cartoony style is not really the best fit for the Marvel heroes, and this isn’t his last appearance. On the subway, Peter Parker rides home from visiting Aunt May when some young toughs decide to mug a lady.

You know, Springer isn’t bad, per se, and I like his inky brush work here, actually, but this stuff is a little weird looking in a Spider-Man comic. Anyway, when the lights come on, Peter is gone, and the goons are all webbed to the ceiling. How could they have ID’d him, really? Is Peter Parker a household name? At any rate, Peter’s on his way out of the subway recapping still more plot points from ASM as he walks by a poster for tonight’s concert by… The Hypno-Hustler. Yer really advertising with your villain name, dude? Really? Peter’s eager to go home and study, thinking about how his life seems out of control, but tonight he’s going to focus. But, of course, he finds his apartment full of the supporting cast, intent on taking him out to celebrate his “un-graduation.” Bet I can guess where they’re headed!

A regular John Travola. Meanwhile, on the George Washington Bridge, a truck marked “Nuclear Materials” is met by protesters blocking its path, saying “No nukes in New York!” The truck turns around, and is attacked by Maggia goons who steal its plutonium cargo. Well, that can’t be good!

I feel like Mantlo is actively refusing to go with the flow on the MJ situation. Wolfman clearly wanted her out of the book, but Mantlo has her in this title almost every month in some capacity. Also, why do none of them drink? It’s long-established that Peter doesn’t, but nobody in this whole gang is into a drink? That seems improbable. Ah, well. Time to meet our idiot villain for the month:

It’s worse than I imagined! Oh, this is so dumb. Is it worse than The Ringmaster and his Circus of Crime? Same gimmick, different venue. I guess not. Maybe so! I don’t know. Hard to say. But the randomness of his back-up singers also having a superpower AND being in on it really puts this over the top. Sooooo, as you can guess, the Hypno-Hustler mesmerises everyone but Peter. As you could never guess in a million years, because it’s so stupid, he literally falls out of his clothes and into his Spider-Man gear…

… as HH and the ladies begin robbing all the patrons, who all produce their valuables to be taken on command. Then Spidey shows up.

I’m with Spidey, how does this doof have so many bits of business? None of them seem to mean much to our hero, though, as he keeps dodging everything. HH tries to get the girls to help hypnotize Spidey, but of course, he can’t hear them, so that doesn’t do anything. Then he rips the headphones off The Hypno-Hustler’s ears, leaving him open to the song of his own accomplices, who… just keep on singing. Shouldn’t they, like, notice?

What?? So HH hypnotized the girls into hypnotizing everyone else?? Why was this so convoluted? And boy, did they not do a good job explaining that before now. Sheesh. What a mess. And look, next issue’s title is even worse than this one. But that issue begins a surprisingly long story with much more importance to the Spidey saga than this, and we’ll have a look at it… later.