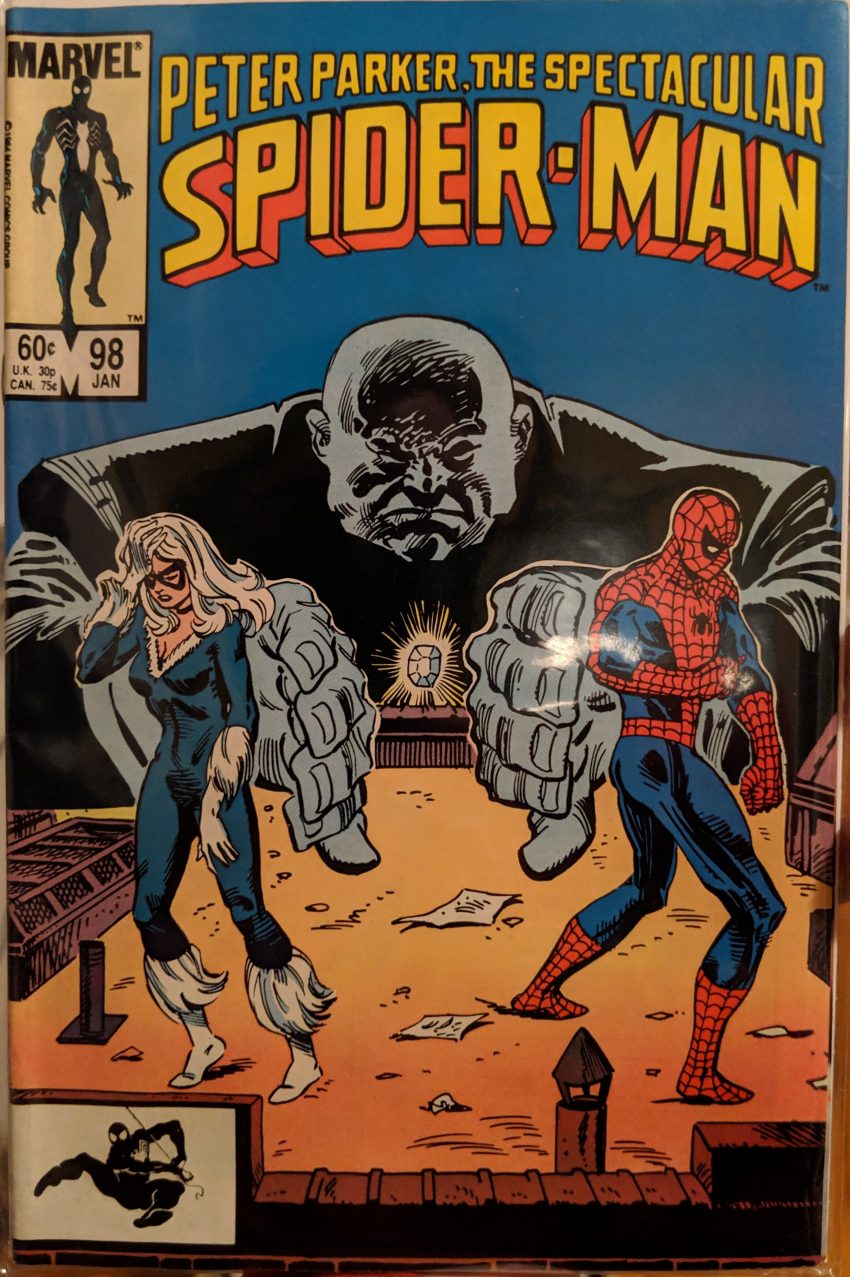 Now there’s a cover that sells a comic. Could this be the end for Spidey & Black Cat? We kick off with the typical Al Milgrom recap pages, Spider-Man swinging around telling you what’s been up, as he heads to Black Cat’s place, where he swoops in the window and startles her. Then they have… the same conversation they always do. I feel like this series is going in circles. Almost every issue for 8 months, Spider-Man wants to have a serious chat with Black Cat, and doesn’t. As they prepare to maybe talk about their relationship, we switch to Kingpin’s building, where he’s berating his science goons for not having developed a method by which to make him a new super enforcer yet.

This the first time how The Answer got his powers has been addressed at all. That’s super weird. That’s the guy from last issue who’s been trying to reproduce Cloak’s powers. Kingpin goes to see, but he’s way more interested in replicating Dagger’s powers so he can save Vanessa. When this still-unnamed scientist says he can’t do that, Kingpin departs. Later, once all the other science folks have gone home, this guy fires up his machine, which takes an enormous amount of power and begins overheating, but which also produces a big black hold right in the middle of the room.

A caption as we switch scenes finally tells us dude’s name. It is, improbably, Dr. Johnathon Ohnn. Really. His experiment seems to have caused a power surge that leads to a blackout right as Spidey and BC are stopping to talk. We only see them for one panel and then jarringly cut away again, to a page of the alien costume on the loose, searching for Peter through streets and alleys. He’s not down on the ground, though, he’s on a roof with Felicia, as we suddenly cut back to them. BC is ready to let the darkness set the mood and forget their chat, but Spider-Man is Spider-Man.

I don’t see how Spider-Man expects to help anyone now that he’s twisted around so far his spine must be broken. What the hell, Trimpe? They swoop down on the streets, beating up dozens of people while flirting and joking. I guess they’re meant to be looters, but we never saw them doing anything. Then Spider-Man… starts recounting his origin to Felicia! WHILE they’re whupping up on a bunch of people in the street!

For once, Black Cat seems almost ready to acknowledge that there’s a person in that Spidey suit, but then it’s off to more fighting. And when that’s over, Cat says she’s heard this story before and he should really unpack his emotional baggage. Ok, she might have a point there. Then she recounts HER origin and says she loved being a criminal and still would be if she didn’t like him so much. Quick cut to Flash Thompson & Betty Brant out to dinner. Betty feels like she’s betraying Ned, while Flash is almost openly proposing they have an affair, what a cool guy. Now, back to our heroes.

As the argument they’ve needed to have for 8 issues continues, Dr. John Ohnn is… floating in a white void full of black spots. He thinks the machine altered the wavelength of the blah blah blah, the attempts to make any of this sound scientific are embarrassing. He’s in another dimension like Cloak’s, but half light, half darkness, that’s the thing.

Ladies & Gentlemen, I’ve never seen his origin before now, but I know The Spot, C-List goofball villain, when I see him. Do you get it? Why would you, it’s a pretty old timey reference. But… Johnathon Onn, The Spot. Right? Ugh. Uuuuuggghhh. As he struggles with his body horror, we go back to Spidey & Felicia’s argument, now taking place in front of a giant billboard for “NEW Boppo Cola.” Not quite as appealing as “Lotto Cola.” We know this because, as Felicia is finally going to tell the truth about her powers, the lights come back on, presumably because The Spot came back out of his portal? That doesn’t really make sense, but what about this does? Anyway:

She even admits she helped The Answer steal Silvermane’s body. Spidey is so mad that her bad luck powers kick in, and he almost falls through the roof, webbing away to save himself, but he’s latched onto a water tower which promptly falls apart, dousing him in its contents

Can comics’ most dysfunctional couple survive? Can The Spot present a real threat to Spider-Man? Tune in next time.