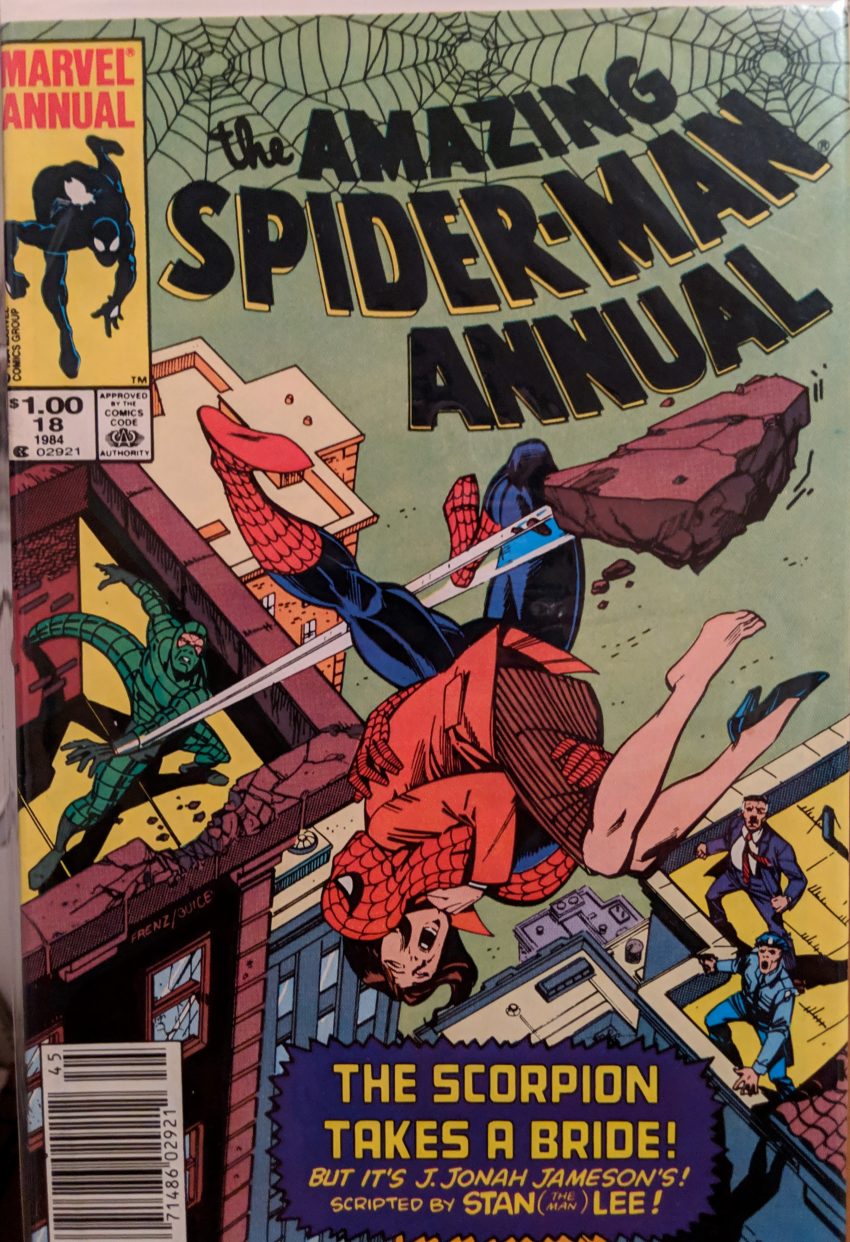 That’s right, True Believer, they got Stan to script this one, his first Spidey script in 12 years! And it is often very weird! Also featuring a plot by Tom DeFalco, breakdowns by Ron Frenz, finishes by Bob Layton & Jackson Guice, and colors by Bob Sharen. Spider-Man has happened upon a brazen bank robbery where the getaway vehicle is a helicopter. That’s switching up the formula a little. Spidey webs onto it and gets taken on a wild ride around the city. Unlike in Stan’s old comics, Spidey narrates this one, which is more common in this period (and going forward). Kinda cool that Stan was able to get with the times in that way.

Eventually the copter gets too close to a building and they lose their rotor, and now Spider-Man has to keep the citizens of New York from being crushed. He shoots a bunch of webs across an alley as they fall into it, letting the copter hit line after line and slow down some. Not enough, though, so Spidey has to brace for impact.

Not the most classic Spidey wit, but whatever. Frankly straining credibility, he also somehow got his camera set up to take pictures of all this, so he runs those over to The Daily Bugle. While he’s there, a courier drops off a package for JJJ, and when a piece of paper falls out of said package, Ben Urich discovers and quickly shares with the room that JJJ & Marla are getting married, and the invitations have arrived.

Whoa whoa whoa! Tone it down, Peter/Stan, what the hell?? And who is “Ann?” Well, these 3 throwaway panels are the bizarre introduction of new occasional Daily Bugle background character Ann Macintosh. She will not appear again in this issue. Weird, right? We cut to JJJ’s executive suite upstairs, where he & Marla are having a moment, but then she’s off on unspecified business, and no sooner does she leave than a new visitor appears through the window:

Sometimes Spider-Man is just Bugs Bunny in spandex. As JJJ’s car leaves The Bugle, Spidey swings off thinking about how strange their history is, and how JJJ’s actually not too bad, except for hating him (And, uh, repeatedly paying to have you killed, Spidey, ya know). And where was Jonah going? To a sanitarium, to visit John. John’s been in here for awhile trying to get better after his years of on again, off again lycanthropy. JJJ has been worried about telling him he’s getting married, but gives it a shot.

That first panel is pure Ditko. As a saddened Jonah leaves the sanitarium, someone watches him go. It’s Mac Gargan, most often known as The Scorpion, locked up in a padded room. He flashes back to how JJJ made him a monster (I mean, he volunteered, but point taken), and thinks The Scorpion will soon sting again. After a therapy session, a guard brings him coffee, cigarettes and a paper, because he’s starstruck by the famous villain. When the paper reveals to Gargan that JJJ’s getting married, that makes him think it’s time to go. He breaks out of his harness pretty easily, as it turns out.

He has the guard tell him where his outfit is, and it’s in a huge steel safe, which Gargan rips right open. Soon The Scorpion steps out, zaps his alleged friend with a tail blast, and grabs the last thing he needs before escaping.

Back at The Bugle, JJJ returns to a surprise party from his employees. Ned Leeds returns just in time from a long, mysterious assignment, and everyone’s having a good time except Peter Parker, who is the only Bugle regular who hasn’t been invited to the wedding yet.

Why, to tell JJJ the person who hates him most in the world kidnapped his son, of course. Peter slips away to canvas the city, but there’s no sign of them, so he heads to JJJ’s house, which he finds crawling with cops, led by our pal Jean DeWolff. Of course, not really crawling, that’s his job ,as he sneaks past them all to get into the building.

Meanwhile, in the sewer, The Scorpion traps John in a tunnel and heads for the surface to attack Marla, of course. There’s far less police presence guarding her, unfortunately, and they don’t stand a chance. However…

Unfortunately, Marla distracts Spidey trying to help, and The Scorpion appears to get the upper hand as the room goes black. Down in the sewer, John begins trying to free himself to go help his dad, while at JJJ’s place, the cops begin to worry they’ve been duped. JJJ feels helpless and scared, and then tricks some of the cops by saying The Scorpion has appeared up in his place so he can sneak down to the street and hop a cab. At Marla’s, the battle continues, but when she gets zapped in the arm in the scrum, Spidey decides his only choice is to scoop her up and run for it.

Stan’s best Spidey quip since 1972 up there. As Spider-Man swings Marla across the city, Scorpion beings throwing big chunks of masonry at them, and carrying someone makes things trickier for our hero.

And so it’s a very unconventional chase across the city as the sun begins to set. Soon, Marla begins to wake up, so Spidey drops onto a roof and sends her down the stairs to the street so he can face The Scorpion without distraction. But Scorpy’s super evil, so he just zaps a corner off the building to give Spider-Man people to save while he leaps down off the roof to the street below, where Marla is fleeing.

John sees how much his dad and Marla love each other for the first time, and rushes in to try to help, but gets belted unconscious for his effort. The Scorpion gives JJJ a choice: he’ll only kill one of his captives, Marla or John. He wants JJJ to pick who lives and who dies.

As the Jameson family flees, Spidey and Scorpion really get into it, in yet another very Ditko-esque 2-page fight scene wherein Scorpion rips his whole mask off to get the webbing out of his eyes.

One last big hit and Scorpion goes down. The cops show up and everyone is saved. We only have 2 pages left, so we better get to that wedding. Before the ceremony, The Jameson boys have a heart-to-heart.

That was an oddly dark and mirthless issue, especially to have been scripted by Stan, but all’s well that ends well. Maybe he was trying to fit in with the wave of more “mature” comics that were just really starting to get going in this time. But getting him back to handle the wedding of one of his oldest characters was fun. And look, Tom DeFalco, Ron Frenz & Stan himself even made it to the wedding! We actually haven’t seen JJJ and Marla meet on the blog yet, but suffice it to say they met because of one of JJJ’s many blatantly illegal schemes to kill Spider-Man. Who’d have thought their conspiring to commit murder could lead to true love?